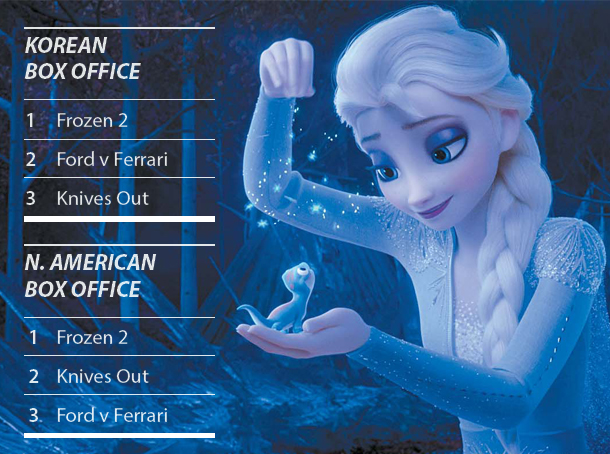 “Frozen 2” continues to top both local and North American box offices in its third week. The film became the most popular animated film and the fifth most popular foreign film this year at the local box office by surpassing 10.7 million ticket sales over the weekend. [WALT DISNEY COMPANY KOREA]


“Frozen 2” continued to rule over the local box office in its third week, finally surpassing the 10-million-ticket-sales mark on Saturday.

The film was seen by 1.4 million people at 1,835 screens over the weekend. The sequel not only was able to exceed the total ticket sales for “Frozen,” which was 10.3 million, but also became the fastest-selling animated film to reach 10.7 million ticket sales - just 17 days after its release.

With no major local or foreign films premiering this week, “Frozen 2” is expected to continue to lead the local box office this week as well.

Based on a real story, the tale is about two car experts - Carroll Shelby and Ken Miles - attempting to build a Ford that can beat a Ferrari at 24 Hours of Le Mans, a prestigious race, in 1964. Ferrari has won the race for the past five years, and the duo, despite many obstacles, try to build a car that will bring them glory for years to come.

Mystery thriller “Knives Out” landed in third place, drawing 164,000 moviegoers to 686 screens. The movie tells the story of private detective Benoit Blanc who is hired by an anonymous source to find the person responsible for the death of wealthy crime novelist Harlan Thrombey. Although the rest of the family believes that the novelist took his own life, Blanc seems to suspect that the death was a murder, not a suicide.

Family comedy “A Little Princess,” featuring actors Na Moon-hee and Kim Su-an, made a quiet debut, selling 157,000 tickets at 696 screens. The story revolves around 72-year-old Mal-soon (played by Na) who is enjoying a quiet single life in Busan when she one day finds her hands full with two granddaughters - 12-year-old Gong-ju and newborn Jin-ju.

Romantic comedy “Last Christmas” rounded out the weekend’s top five films and signaled a festive mood in theaters with 115,000 people seeing the Christmas film at 618 screens. The film, starring “Me Before You” (2016) star Emilia Clarke and “Crazy Rich Asians” (2018) actor Henry Golding, is about how a woman who seemed to have given up hope on her dreams is changed due to a mysterious stranger.

At the North American box office, “Frozen 2” blanketed multiplexes for the third straight weekend, continuing its reign at No. 1 with $34.7 million in ticket sales, according to studio estimates Sunday.

The Walt Disney Co. animated sequel has already grossed $919.7 million worldwide. It will soon become the sixth Disney release this year to cross $1 billion, a record sure to grow to seven once “Star Wars: The Rise of Skywalker” hits theaters later this month. Early next week, Disney will cross $10 billion at the global box office this year.

But the weekend overall at the box office was yet another disappointing one for the movie industry. A handful of under-performing releases and a relatively thin wide-release schedule hasn’t helped the 5.6 percent slide in domestic ticket sales from last year, according to data firm Comscore.

This weekend produced an outright flop in “Playmobil: The Movie,” the week’s only new wide release. The STX Films release was never expected to do well, but it bombed so thoroughly that it will rank among the worst-performing wide releases ever. It grossed $668,000 at 2,337 venues, giving it a per-theater average of just $286.

A handful of companies combined to produce the $75-million French film, including Wild Bunch and Pathe.

The top five films were almost unchanged from last weekend.

Rian Johnson’s acclaimed, star-studded whodunit “Knives Out” remained in second place with $14.2 million, declining a modest 47 percent in its second week of release. With $63.5 million cumulatively and $124.1 million worldwide, the Lionsgate release has been one of the season’s bright spots.

So has James Mangold’s “Ford v Ferrari,” which stayed in third place with $6.5 million over its fourth weekend. The racing drama, starring Matt Damon and Christian Bale, has sped to a global take of $168 million for Disney, which acquired the film’s original studio, 20th Century Fox, earlier this year. The film cost about $100 million to make.

Melina Matsoukas’ outlaw romance “Queen & Slim” moved up to fourth in its second week with $6.5 million, swapping places with Marielle Heller’s Mister Rogers drama “A Beautiful Day in the Neighborhood” ($5.2 million in its third weekend).

Some of the weekend’s most widespread movie watching may have been on Netflix, though the streaming service doesn’t disclose viewership tallies or box-office receipts.

A week before it opens in North America, Sony’s “Jumanji: The Next Level” debuted in 18 international countries where it made $52.5 million.

The sequel to 2017’s “Jumanji: Welcome to the Jungle,” which grossed $962 million worldwide, is expected to lead the box office next weekend.