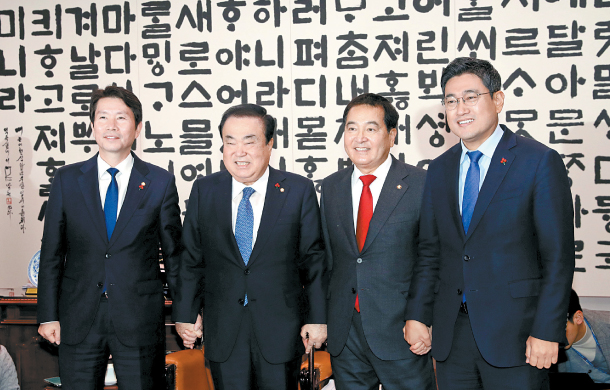 The main opposition Liberty Korea Party (LKP) on Monday reversed an agreement to scrap a filibuster campaign and vote on next year’s budget -- just hours after its new floor leader struck the deal to end a legislative standoff.

“We will vote on the budget bill by holding a plenary session at 10 a.m. tomorrow,” Shim said following the meeting. “The LKP will hold a general assembly of lawmakers and withdraw our filibuster motion, submitted to the legislature during the last plenary session.”

The National Assembly had ground to a halt after the LKP filed a motion to filibuster 199 bills scheduled to be voted on Nov. 29. Shim’s predecessor, Rep. Na Kyung-won, initiated the filibuster to block the ruling DP and four other opposition parties from voting on a series of politically sensitive bills.

Shim made clear on Monday that the LKP would abandon that strategy. The three parties agreed that the 199 bills will also be voted on during today’s session.

But later in the afternoon, the LKP convened a general assembly of its lawmakers. Despite Shim’s promise, the LKP lawmakers decided they would only end the filibuster if their demands were reflected in the budget bill. “I agreed to withdrew the filibuster plan based on the belief that the budget bill will be passed after it is fine-tuned by the three parties,” Shim said after the general assembly of lawmakers overrode his deal. “If the three parties will agree to the final version of the budget bill, everything will be resolved.”

Shim said the LKP needs to confirm progress in the budget bill negotiations before abandoning the filibuster plan. The LKP lawmakers demanded to participate in the budget review because they missed that process for weeks during their legislative boycott and their voices were not reflected in the current proposal.

After the three parties and Speaker Moon agreed to a new legislative schedule earlier in the day, the Special Committee on Budget and Accounts resumed the process to fine-tune the budget bill. As of Monday evening, the special committee has failed to produce a final budget bill.

Shim said earlier in the day that further negotiation will take place to decide the voting schedules for five contentious bills, all objected to by the LKP. It remains to be seen how the DP and other parties will handle the matter after the LKP broke the agreement.

The LKP has been protesting a series of reform bills pushed by the Moon Jae-in administration and ruling party. An election law revision to introduce a new proportional representative system and four bills designed to reform the prosecution, including bills to create a new investigative agency for senior public servants, were at the center of the political standstill. All five bills were designated fast-track items on April 30. The election law revision bill was sent to the plenary session for pre-voting deliberation on Nov. 27, based on the fast-track timeline.

As the DP and LKP failed to agree on a voting schedule for the prosecutorial reform bills, Speaker Moon set a deadline in October, informing both sides that the bills will be sent for deliberation on Dec. 3. Deliberation at a plenary session is the final step before voting on a bill. Until Monday morning, the DP and four opposition parties had planned to hold a plenary session later in the afternoon to introduce the fast-tracked bills for a vote. That plan, however, was postponed after Shim was elected the new LKP floor leader and agreed to normalize National Assembly operations.