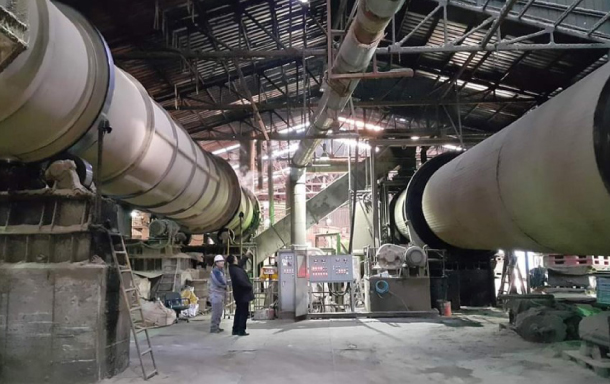 A shut down factory in Hamna-myeon in Iksan, North Jeolla, on Dec. 4, was confirmed last month by the Environment Ministry to have released carcinogens processing tobacco waste to produce fertilizer, causing high rates of cancer among residents of a village 500 meters (1,640 feet) away. [KIM JUN-HEE]

Cargo pallets stamped with the initials of KT&G, the leading Korean tobacco company, are stacked in the yard of a defunct factory in a rural town in Iksan, North Jeolla.

The factory in Hamna-myeon, called Geumgang Nongsan, once produced organic fertilizer from tobacco leaves and other waste starting in October 2001. On April 17, 2017, local residents filed a petition requesting the government to conduct a health impact survey of the fertilizer plant, and a state commission launched a study in July 14 that year. Operations of the factory were suspended in late April 2017 after it was found to be violating the fertilizer control act.

Over the years, people living in the nearby village of Jangjeom have been diagnosed with an abnormally high level of cancers. The government conducted an epidemiological survey and concluded that of the village’s 99 residents, 22 were diagnosed with cancer of some kind, and 14 of them eventually died of the disease since the factory opened in 2001.

The Ministry of Environment last month announced the results of an investigation into the matter and confirmed that the reason so many villagers came down with cancer was carcinogens released by the fertilizer plant. The residents developed all types of cancer - including liver, skin, gallbladder, breast, stomach and lung - at between two to 25 times higher than the rate elsewhere in the nation.

The ministry found that the fertilizer plant had illegally processed dregs of tobacco leaves, which should have been used only as compost, to make them into organic fertilizers. Heat as high as 300 degrees Celsius (572 degrees Fahrenheit) was used to dry the leaves, producing carcinogens.

More than two-thirds of the villagers are farmers. Thus, these villagers are facing double setbacks: health problems and a loss of their livelihoods. As reports of the carcinogens spread, buyers for their agricultural produce dried up. No one wanted to buy produce from an environmentally polluted region.

A study by the Iksan city government found that there was nothing wrong with the village’s produce, which includes cabbages, turnips and beans. However, that is not enough to convince the public.

Cabbages can be seen discarded in the fields of Jangjeom. There was no use harvesting them. Turnips and beans remain piled up in warehouses.

The farmers say they can’t blame people for not wanting to eat their crops.

Kim Yeong-hwan, an 81-year-old native of Jangjeom, told the JoongAng Ilbo that the rates of cancer may be even higher than suggested in the Environment Ministry report.

“Of our villagers, 33 people were diagnosed with cancer, and 17 died while 16 are battling the disease,” Kim said. “I was also diagnosed with gastric cancer four years ago, and they cut out half my stomach.”

He said that his weight dropped from 67 kilograms (148 pounds) to 50 kilograms after the surgery.

“Because I lacked strength after I got sick, I gave up on farming,” Kim added.

Kim In-su, 67, head of the village, worked at the fertilizer factory for years until it shut down.

Kim previously ran a restaurant but then the factory opened up. Because of the foul smoke released by the fertilizer plant, customers stopped coming. An executive at the factory offered him a job, and Kim began working at the plant in 2013, crushing tobacco waste into fine bits.

“Until I left the factory, I didn’t know that tobacco waste was hazardous to the human body at all,” Kim admitted.

However, he became suspicious in 2013, when some tobacco dregs caught fire and he lost consciousness from breathing in the fumes. He was taken away by ambulance. In 2015, he said, his vision dimmed after an optic nerve disorder, which led him to be hospitalized for a week.

“The residents live in terror that they will get diagnosed with cancer,” said Choi Jae-cheol, 58, head of a committee of villagers trying to find solutions to the intertwined problems. “An agency that has public confidence needs to inspect the safety of the agricultural produce and soil. Until the results are released, upland farming has to be halted, and there has to be fundamental measures such as stipends to support the people while farming is prohibited.”

Following the Environment Ministry’s announcement, the Iksan city government, North Jeolla provincial government and central government have apologized and pledged follow-up measures to support medical fees and compensate the victims. However, the villagers continue to remain anxious and distrustful.

Yim Hyeong-taek, a member of the Iksan City Council, said, “The residents since 2001 raised endless complaints that they couldn’t live because of the foul odor and black smoke, but the Iksan city government did not take one administrative measure for 15 years until 2015.”

He added that an administrative lawsuit against the Iksan city government, North Jeolla provincial government and central government for negligence in management and supervision is in the works.