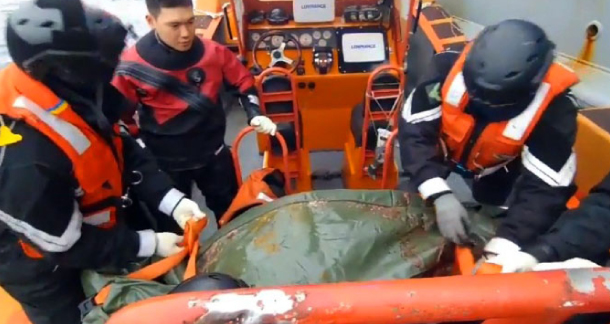 The Coast Guard on Sunday afternoon retrieves a body believed to be that of a crewman missing on Nov. 19. [NEWS1]

The Coast Guard on Sunday discovered two bodies believed to be among the 11 crewmen missing after their fishing boat caught fire and capsized in waters off Jeju Island.

A 29-ton fishing boat with six Korean nationals and six Vietnamese nationals on board caught fire and capsized near Jeju Island on Nov. 19. A man who was found that day was later pronounced dead and identified as a 61-year-old Korean.

On Sunday afternoon, two bodies were found some 50 meters (164 feet) from what appeared to be the stern of the vessel during an underwater search operation by a remotely-operated vehicle of the Navy’s Cheonghaejin submarine rescue ship, the Coast Guard said.

The bodies were found about 10 kilometers (6.2 miles) from where the accident occurred. One of the two bodies was retrieved around 5:15 p.m. on Sunday and is assumed to be one of the six Vietnamese who went missing. “The retrieved man’s body was severely damaged when we first found it. His clothes were all burnt as well,” an official from the Coast Guard said. “His identification will be determined more accurately through DNA analysis.”

The Coast Guard also said it will request the Jeju National University Hospital to carry out an autopsy to determine the exact cause and time of the death. Another body was retrieved on Monday around 2 p.m. It was expected that the body would arrive at Jeju Port around 7 p.m. on the same day.

The Coast Guard said it took the rescue workers one more day to recover the second body due to extremely poor underwater visibility and unfavorable weather conditions.

The identification of the second retrieved body had not been determined as of 8 p.m. press time Monday.