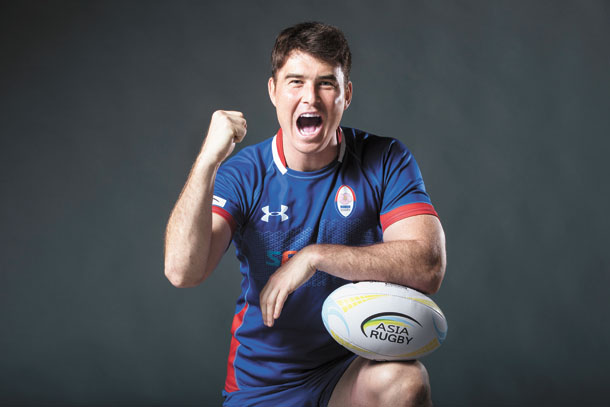 After earning his Korean citizenship in August 2017, Kim Jin hopes Korea’s rugby sevens team can pull off a miracle at the 2020 Tokyo Olympics. [JANG JIN-YOUNG]

Special naturalization in Korean sports is perhaps best associated with the men’s ice hockey team, basketball player Ra Gun-a and marathon runner Oh Joo-han, but there are some athletes in less popular sports who have found their way here for a shot at glory.

Kim Jin, or Andre Jin Kim Coquillard, is the very first player on the Korean men’s rugby sevens team to have earned his Korean citizenship through special naturalization, and just next year he will wear the Taeguk Mark at the world’s biggest sporting event.

Last month, the Korean men’s rugby sevens team, ranked 31st, defeated No. 21 Hong Kong 12-7 to earn a spot at the 2020 Tokyo Olympics. Korea was lucky to earn their first-ever ticket to play rugby at the Games as eighth-ranked Japan, the highest-ranked team in Asia, already earned their spot as host.

“The moment our victory was finalized, I was bawling because I was so happy,” Kim said. “After dinner, I cried again in my room. It was the happiest time of my life.”

Rugby sevens was removed from the Olympics after the 1924 Games in Paris, but made a comeback for the first time in 92 years, at the 2016 Rio Olympics.

Rugby sevens is one of the three forms of rugby, alongside rugby union - as seen in the Rugby World Cup - and the less common rugby league. Sevens is a scaled-down form of rugby union and is played on the same size field, but with much faster gameplay.

Tries, conversions and penalties are scored in the same way as rugby union, and, like every other form of the game, sevens is a full-contact sport.

Aspiring Olympian Kim was born in 1991 to an American father and a Korean mother. Any physical advantage is crucial in rugby, and Kim certainly has an edge as he stands at 1.95 meters (6 feet, 5 inches) - not surprising considering his father is 1.83 meters tall and his mother is 1.75 meters tall.

Kim’s mother, Kim Dong-soo, used to be a famous model back in the 1980s and is now a professor at Dongduk Women’s University. His father used to play football for Dartmouth College. Due to his father’s work, Kim grew up in Seoul and in Tokyo until he was 12.

Kim’s strongest childhood memory about Korea is the Korea-Japan World Cup back in 2002. At the time, Kim was only 11 and was a little kid who played football at FC Chaboom Fussball Club. When Kim watched Korean football, he said he would get so excited that he would just jump around.

He only started playing rugby in the ninth grade, when he started studying abroad in Canada in 2006. As he showed great potential the moment he started the sport, Kim was added to the USA U-17 national team in 2008.

“At the time, I was 1.85 meters tall,” Kim said. “I had the perfect physique for rugby. Since rugby had similar moves to football like dribbling and kicking, it was easier for me to adjust.”

Following his impressive high school career, Kim continued the sport in the United States by playing for the University of California, Berkeley. However, as there wasn’t much infrastructure for professional rugby in the United States, Kim called it quits and headed to Shanghai in 2014 to work at a sports management company.

But his life in an office didn’t last very long.

Instead of playing for Hong Kong, Kim called the Korea Rugby Union.

“If I were to be on the national team, I wanted to play in my mother’s country,” Kim said. “So I called the [Korea Rugby] Union.”

After getting through all the tests, Kim finally earned his spot onto the Korean men’s rugby team. In rugby, a player can represent Korea if one of his parents or grandparents holds that country’s nationality. But to compete at the Olympics or the Asian Games, the player must naturalize.

While Kim very quickly fit into the national team, he struggled to adapt to living in Korea, where he is considered a foreigner.

As a result, there were times when he regretted his decision to come to Korea, but focusing on the Olympics helped him stick with the team. In August 2017, Kim finally earned his Korean citizenship through special naturalization.

In addition to earning his Korean citizenship, Kim is now the sub-captain on the national team.

Although Korea is far from being considered a threat at the Tokyo Olympics, Kim and the team are hoping for a miracle just like the 2002 football World Cup, when Korea advanced to the semifinals.

“Looking back at the 2002 football World Cup, nobody in the world expected that,” Kim said. “There’s no law that says we cannot make such a miracle happen in Tokyo. We’ll make real trouble at the Olympics.”