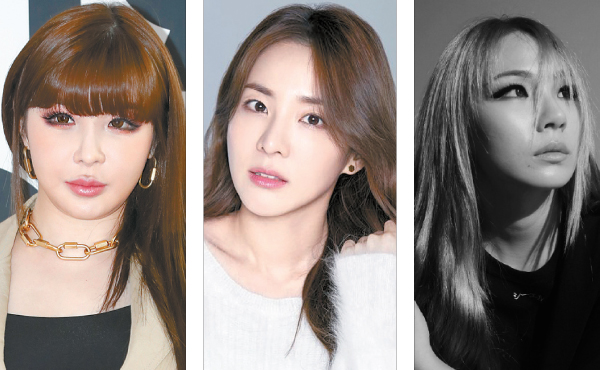 December 10 was a big day for fans of the disbanded girl group 2NE1.

Singer and rapper CL released new tracks off of her upcoming album “In The Name Of Love” on Tuesday and singers Park Bom and Sandara Park dropped a duet titled “First Snow” on the same day.

“Chae-lin’s [CL] new song comes out on the same day as us,” Park Bom said during a live streaming session on Naver’s V Live on Monday. “I think the fans will like it. I hope people remember the good memories while listening to all the songs,” added Sandara Park.

“First Snow” is the first release in seven months for Park Bom and the first song from Sandara Park in two and a half years, as she has mainly focused on her acting career since 2017.

“I hope you listen to our song and Chae-lin’s too. I hope that tomorrow is a day for 2NE1,” said Sandara Park.

CL kicked off her new album project on Dec. 4 with two tracks. Over a three week period, CL plans to release all six of her album’s tracks.

This is the singer’s first music to come since 2NE1’s final single “Goodbye” was released in January 2017. She ended her contract with former agency YG Entertainment last month.

“‘In The Name Of Love’ takes the form of CL’s diary that she wrote over the last three years and until she left YG Entertainment,” her agency said.

On Nov. 26, 2016, YG Entertainment announced that 2NE1 was officially disbanded after Gong and Park Bom left the agency to pursue their own careers.

Park had made her long-awaited comeback this March.