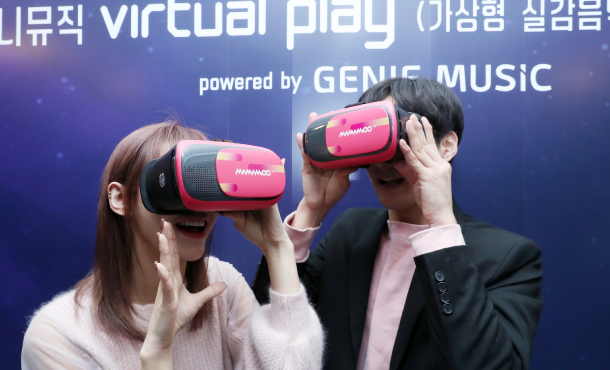 Genie Music, a streaming service under mobile carrier KT, has released a virtual reality (VR) music service that lets users watch specially-produced albums without leaving the comfort of their own home.

Named Virtual Play, the service is aimed at providing music performances in VR, augmented reality (AR) and hologram technology - all of which require large data transmissions and therefore need a 5G network to work properly.

It comes with a special-edition head-mounted device, an SD card - both emblazoned with Mamamoo’s official logo - photo cards and a serial number which customers can use to download five VR videos from Virtual Play’s mobile app. The entire package started sales on e-commerce websites Gmarket, Interpark and KT’s official online store at 55,000 won ($46), on Tuesday afternoon.

Each video shows Mamamoo singing and dancing on stage to one song. With the headset on, members stand out in 3-D on stage as if they’re about 2 meters (6.6 feet) away. Users can zoom in to take a closer look at the singers with two finger taps on the right side of the device. The videos are not VR versions of former performances but were exclusively produced for the visual album.

KT is not the first mobile carrier to offer K-pop VR content, but unlike existing products, which mostly have a limited viewing angle of 180 degrees, Mamamoo’s VR album released Tuesday allows for a 360-degree viewing experience.

The video also has 8K resolution. To save as much data as possible, high-resolution footage will be reserved for the performers on stage, rather than the surrounding scene.

Virtual Play’s first product, the “VP album,” is more geared toward hard-core fans, but the long-term goal is developing the platform into a VR streaming service for live performances. A major task to reach that stage will be developing VR stitching technology, which refers to patching together videos of the same object from different angles.

“Now that we have launched the first Virtual Play product, we plan to launch livestreaming services next year and a subscription-based platform by the first half of 2021,” said Genie Music CEO Cho Hoon during a press event Tuesday, at the company’s office in Gangnam District, southern Seoul.

Genie Music is also planning to launch Virtual Play globally and is in talks with Korean entertainment companies to work with other K-pop stars. The time taken to make one VR album is around three months, Cho added.

“We are always open for collaboration with foreign artists, and we believe the [K-pop content] will also contribute to exports - essentially, videos are offered via the app so it’s always available for global use,” he said.