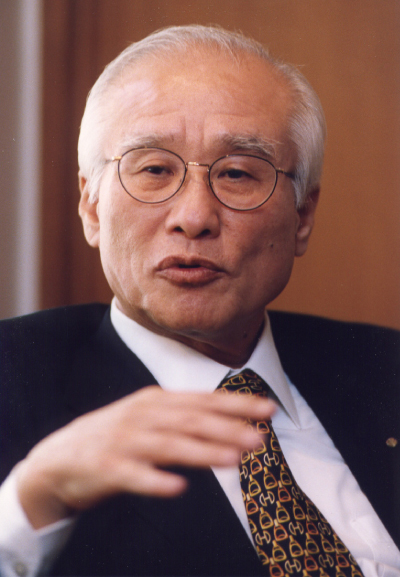 Kim Woo-choong, founder and former chairman of Daewoo, once one of Korea’s leading conglomerates, passed away at the age of 82 late Monday.

He died of chronic disease.

Another chapter in Korea’s history of iconic business tycoons, those who drove the country’s economic development and global expansion, has come to a close.

Kim was revered as the representative self-made Korean businessman, and he was admired for his aggressive and passionate business philosophy of never shying away from challenges. He pioneered entry into unfamiliar global markets, efforts that helped Daewoo become at one point the second-largest conglomerate in the country.

He was particularly known for his signature quote: “It’s a big world, and there’s lots to be done.”

But he is also connected with the excesses of the past, excesses that eventually drove Korea to seek a bailout from the International Monetary Fund and resulted in the loss of many jobs in the country.

Kim lived a relatively low-key life in his later years. After returning to Korea from a near six-year stay in China and spending some time in prison, he became a go-between connecting Korea and Vietnam.

He started a program that focused on training young entrepreneurs, including not only Koreans but also Vietnamese and other Southeast Asians.

Due to his age, Kim returned from Vietnam in June this year and was treated at the Ajou University Hospital in Suwon, Gyeonggi, where his funeral is being held.

Kim didn’t start out with a silver spoon.

Born in Daegu in 1936, he majored in business management at Yonsei University, and his first job was at a textile company.

Left: Kim Woo-choong, late chairman of the now-defunct Daewoo Group, is featured on the cover of Fortune magazine’s May 5, 1992, issue. Right: The late chairman stands next to Korea’s first compact car, the Daewoo Tico. Kim drove the five-seater car to work by himself to promote the car. [JOONGANG PHOTO, DAEWOO GLOBAL MANAGEMENT RESEARCH STUDY GROUP]

Unlike competitors at the time, his textile company focused heavily on exports. This proved to be the recipe for success.

In its first year, Daewoo Industrial exported $580,000 worth of textiles to Singapore and later expanded to other markets, including Indonesia. It was the first Korean company to open an overseas office, in Sydney in 1969.

He later expanded into other businesses, including brokerage and construction.

In the 1970s, he aligned with the government’s policy of building heavy and chemical industries, and Daewoo further widened its portfolio to include shipbuilding and automobiles.

Just five years after its founding, Daewoo was able to achieve $1 million in exports, and in a decade, it stood shoulder to shoulder with other major conglomerates, including Hyundai and Samsung.

In 1974, Kim created Daewoo Electronics, which first started off as a company that specialized in exporting Korean electronics goods.

After numerous mergers and acquisitions, Daewoo Electronics was competing with the likes of LG and Samsung.

Daewoo Motor, which started off with the acquisition of Saehan Motor Company in 1981, became Korea’s second-largest automaker after Hyundai Motor. It exported to the Middle East, the Soviet Union and Africa.

In 1981, at the age 44, he started to look abroad for business opportunities.

Kim was known for his aggressive management style. Along with his ambition in terms of global expansion, Kim was famously known for saying, “if you don’t have the technology, all you need is to buy those with the technology.”

He also said businesses are made with borrowed money, and those loans can be paid off with the profits made from the businesses.

But he wasn’t like other chaebol heads, who tended to run their businesses top-down. He was open to listening to his executives and didn’t mind joining his workers and getting his hands dirty. 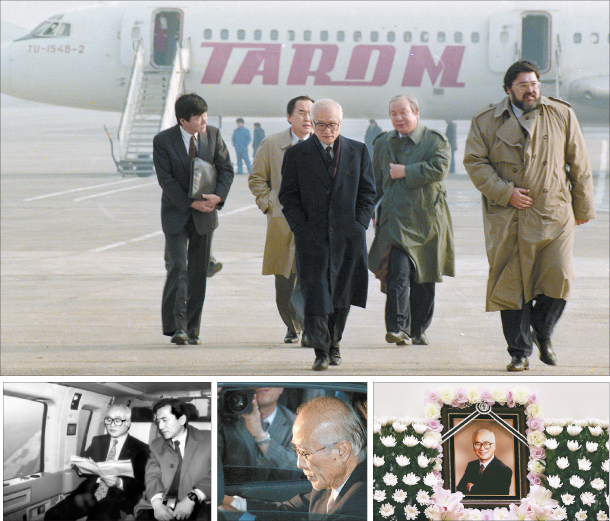 Top: The late chairman visits a shipyard in Mangalia, Romania, in 1997. From left: The late chairman travels on a helicopter. Kim keeps his head down as he is being arrested on charges of accounting fraud and siphoning off 10 trillion won (＄8.4 billion) overseas on June 6, 2005. Kim’s photo is displayed at Ajou University Hospital in Suwon, Gyeonggi, on Tuesday. [DAEWOO GLOBAL MANAGEMENT RESEARCH STUDY GROUP, JOONGANG PHOTO, KIM SANG-SEON, YONHAP]

One famous episode involved Kim staying at the company’s Okpo shipyard for a year and a half, managing on the ground when the company faced a labor dispute in 1987.

Kim was known for his connections with politicians, especially former President Park Chung Hee, who helped Daewoo Group to expand.

When Kim bought the shipyard in Okpo to start Daewoo Heavy Industries, Park reportedly commented that there is no one other than Kim who can take over the asset, citing his determination and bold decision-making.

Kim in an interview with a local media said President Park would often visit a Japanese restaurant at Daewoo’s headquarters and would call on him.

A C.I.A. report disclosed in 2017 also noted that the success of Kim was largely due to the close relationship he had with President Park. According to the report, the relationship dates back to Kim’s father, who was President Park’s teacher in Daegu.

By 1998, Daewoo was the second-largest conglomerate in the country, after Hyundai. Its assets totaled 76.7 trillion won, and its annual revenue was 91 trillion won. The group had 41 affiliates, 600 or so overseas offices, 100,000 Korean employees and 250,000 workers in 21 countries.

Daewoo ranked 18th among the world’s top 500 companies according to a Forbes 1998 report.

But it was the aggressive style of management that led to the downfall of the conglomerate.

When the country faced the financial crisis of the late 1990s, the conglomerate was short on liquidity after years of heavy borrowing and reckless expansion, and accounting fraud was exposed.

The acquisition of SsangYong Motor in 1998 didn’t help, further exacerbating the liquidity crunch.

The dismantling of one of Korea’s largest business empires started in the summer of 1998, when 12 affiliates, including the shipbuilding and automobile companies, started restructuring. The workout later extended to the rest of the group’s companies.

Kim fled the country in October 1999. He reportedly left for China to attend the ceremony celebrating the opening of Daewoo Motor’s automotive parts manufacturing plant in Shandong, but he stayed for a while.

During a 2003 interview with Fortune, Kim claimed that then-President Kim Dae-jung and high-ranking government officials told him to lay low abroad until the debt restructuring was complete and that he wouldn’t face criminal charges for Daewoo’s demise. He was also told he would run the automotive company upon his return.

“The president told me directly by phone before the workout to go away for a short period,” Kim was quoted as saying.

The government has denied such claims.

Kim returned in 2005, ending a near six years of exile. The following year, he was sentenced to eight years and six months in prison for 2.1 trillion won in accounting fraud and 9.9 trillion won in loan fraud. He was ordered to forfeit 17.9 trillion won.

He was released in January 2008 under special presidential pardon.

Since then, Kim has tried to stage a comeback with businesses in Vietnam.

In 2010, he focused mostly on developing human resources under the Global Young Business Manager program. The program, which was offered in Vietnam, Myanmar and Indonesia, was managed by the Daewoo Sky Institute, which was created by former Daewoo employees.

The program offers free vocational training for college graduates in Southeast Asia as well as to Koreans. Some 1,000 students have graduated from the program.

Chang said Chairman Kim told his family that he didn’t want to get treatment to further extend his life and took his last breath surrounded by family.

“While he didn’t leave a will, he would usually comment on the need to continue to expand programs that would train young entrepreneurs,” Chang said.

The Federation of Korean Industries (FKI) released a statement mourning the death of the business tycoon, but also stressing that Kim’s efforts should continue.

“We express our deepest condolences on the passing of Chairman Kim Woo-Choong, who was the first in global management and the driving force behind Korea’s economic development.”

The statement praised Kim as the pioneer who led Korea’s industrialization and globalization.

“After the Cold War, he was the first to rush to Eastern Europe in planting the seeds of global management and the first in promoting brand Korea in unfamiliar lands, such as Central and South America, China, Vietnam and Africa through frequent visits,” the statement from the business group said.