Facilitating understanding at a concert hall near you: Maestro Gum Nanse works to connect people through the power of music

Facilitating understanding at a concert hall near you: Maestro Gum Nanse works to connect people through the power of music

This is a life lesson that maestro Gum Nanse learned from his father Gum Su-hyeon, who was also a renowned composer in Korea.

“My father used to tell me to do things extra, while I’m at it, or since I’m already there,” said Gum. “I thought this was such a positive attitude to have that I try to implement it whenever I can in my musical journey.”

For example, when Gum went to Berlin with his New World Philharmonic Orchestra - a project orchestra he created about 20 years ago - for a concert in 2013, the late chairman of Kiswire, Hong Jong-ryul, asked him if he could visit Luxembourg.

“Kiswire wanted to celebrate the acquisition of a steel manufacturing company in Luxembourg with a classical concert. My schedule was very tight, and I could have turned down the offer if I wanted to,” said Gum. “But I was reminded of my father’s words and decided to go there as I was already in Berlin.”

The concert was invitation-only, attended by high-ranking officials of the small European country bordered by Belgium, Germany and France. According to Gum, the then-mayor of Luxembourg City, Xavier Bettel was also in attendance. He was so moved by Gum’s concert, especially his signature style of providing easy-to-understand commentaries in between programs, that Bettel gave a speech during the after-party in which he praised Gum by saying that he only knew about “‘Gangnam Style’ of Korea, but there is also Gum Nanse Style.” 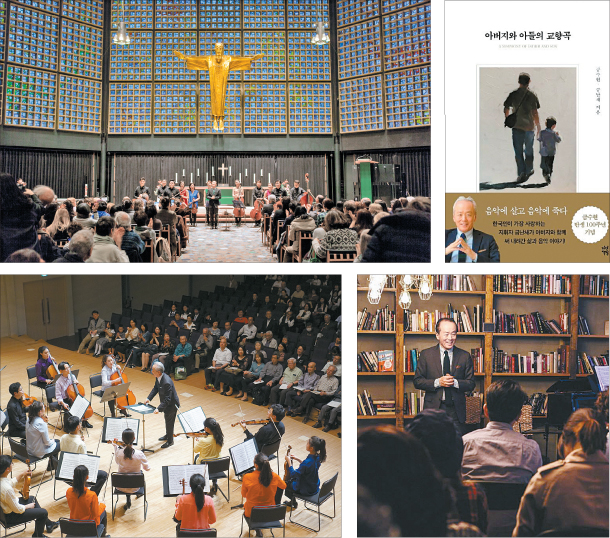 Clockwise from top left: Gum’s charity concert at the Kaiser Wilhelm Memorial Church in Berlin in 2016 was added by Gum at the last minute because he was already in Berlin; Gum’s new book “A Symphony of Father and Son”; Gum’s annual Manhattan Chamber Music Festival will resume next year; Gum and students of the Seoul Arts High School perform at Bradshaw Hall in Birmingham, England, in September. [GUM NANSE]

“His speech was accompanied by frenzied applause,” said Gum, “And guess what? Bettel became the prime minister of Luxembourg. When he visited Korea last year, we had dinner together. He still talked about that concert. He said that it would be great to hold a similar one in Luxembourg again.”

His connection with Kiswire allowed Gum to stage a concert every year with the New World Philharmonic Orchestra at F1963 in Busan, a former steel wire factory belonging to Kiswire that turned into a cultural complex after being abandoned for many years.

“This is only one of a countless number of examples that have led to another musical achievement by following my father’s advice,” said Gum during a recent interview with the Korea JoongAng Daily. “I’ve experienced and witnessed so many positive ripple effects from this, and I want to share this with young Koreans of today.”

That is why Gum recently published a book titled “A Symphony of Father and Son.” It is composed of four chapters, three of which are written by his father. The final chapter is written by the maestro.

“I also wanted to commemorate my father, who would have celebrated his 100th birthday this year if he was still alive.” He plans to donate 1,000 copies of the book to public schools across the country.

“The three chapters are basically a printed version of short tales my father used to tell me and my brother over a few drinks. These stories were so funny at the time, but when I come to think about it now, they are all valuable life lessons.”

Trying to act as a bridge between people, between generations and between countries through music also comes from his musician father and is what motivates this 72-year-old maestro to make it through his tight schedule day after day.

“You can’t create a symphony on your own,” said Gum. “It’s created by forming harmony with others. I believe this is very important, not only in music, but in our lives, in diplomacy, in politics [and] in relationships.”

During the 5th Korea-Czech Future Forum that was held last month, Gum suggest creating a joint orchestra composed of Korean and Czech musicians to facilitate a true collaboration between the two countries.

“Everyone in the forum thought it was a great idea since we’ve only been holding discussions, and there haven’t been any practical outcomes so far,” he added.

Gold Symphonia Prague will be the name of the joint orchestra composed of 14 musicians from the Czech Republic and 18 musicians from Korea’s New Chamber Orchestra, explained Gum.

Since next year marks the 30th anniversary of Korea and the Czech Republic’s diplomatic relations, Gum also plans on holding an anniversary concert by inviting a solo artist from the Czech Republic to perform with the Seongnam Philharmonic Orchestra, a city orchestra in Gyeonggi that Gum is a music director of.

“I’m very interested in the Visegrad Group, which is a cultural and political alliance of four Central European states that includes the Czech Republic, Hungary, Poland and Slovakia,” said Gum. “It’s possible to join forces and open up opportunities for conversation through music.”

Critics have been lauding Gum for helping to grow the classical music audience in Korea. Providing commentary before or in between ballet, opera or classical music performances have become popular in Korea’s performing arts world, but it was Gum who actually started it to help audience members better understand the difficult genre of opera back in 1992.

“It costs millions to stage one opera production, but it only goes on for a couple of days because of the budget,” said Gum. “I thought that what Korea needed to do at that moment, and continue to do today, is to foster audience members prior to establishing state-of-the-art opera houses.”

Back in 1992, Gum took important arias from “La Traviata” and staged a concert opera by having only a few props on stage. He also presented an explanation before the performance to help the audience understand the work.

“It was a sensation,” he said. “I witnessed then that this style of ‘educating the audience’ works, and I’ve been doing that for the past 27 years.”