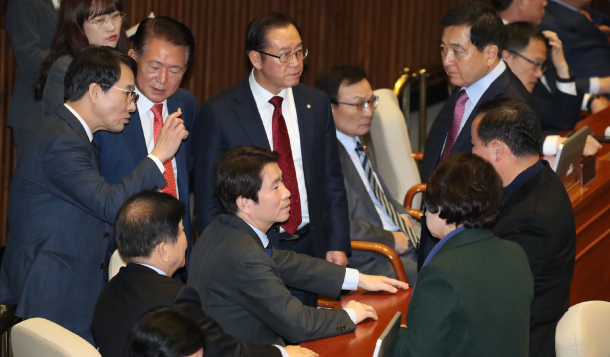 Chief negotiators of three major parties sat down on Tuesday for their final negotiations on fixing the Moon Jae-in administration’s spending plan for next year, after their earlier deal to pass the budget bill on Monday was nixed by the main opposition party.

National Assembly Speaker Moon Hee-sang and floor leaders of the ruling Democratic Party (DP) and opposition Liberty Korea Party (LKP) and Bareunmirae Party started the negotiations at 1:36 p.m. at the National Assembly. A voting session, scheduled to reopen at 2 p.m. from recess, was delayed as the meeting continued. Earlier in the morning, the National Assembly held a session and passed 16 uncontentious bills.

The meeting between Moon and Reps. Lee In-young of the DP, Shim Jae-cheol of the LKP and Oh Shin-hwan of the Bareunmirae Party was intended to end the political deadlock over the budget and other politically sensitive bills. Last month, the LKP had requested a filibuster of nearly 200 bills, many of them still pending for voting, in order to block the expected passage of several contentious bills.

Moon and the three chief negotiators had struck a deal on Monday to end the legislative standstill, agreeing that the budget bill would be voted on and the LKP would recant the filibuster plan. They also agreed to hold off on voting on the contentious bills to introduce a new election system and reform the prosecution during the regular session, which ends Tuesday.

The LKP, however, backtracked Monday evening, as its lawmakers decided to keep the filibuster plan, while demanding their position be reflected in the budget bill. The three parties held overnight discussions but failed to reach an agreement.

With public frustration snowballing over the continuing political deadlock until the final day of the regular session, Moon opened a plenary session Tuesday and allowed voting on 16 less controversial bills.

“We will vote on the uncontentious bills and an appointment in the morning,” Moon said as he opened the session at 10:56 a.m. “Then, the session will go into a recess for talks among the negotiation blocs.”

The lawmakers passed 16 bills including the Min-sik Law and the Ha-jun Law, named after two children killed in traffic accidents. The Min-sik Law, composed of two bills, requires the mandatory installation of speed cameras and traffic lights inside child protection areas and tougher punishments, as heavy as lifetime imprisonment, on offenders. The Ha-jun Law requires improved safety installations inside parking lots.

Motions to ratify international treaties and extend overseas deployments of the Cheonghae and Akh units were also passed.

Following the voting, Rep. Lee Man-hee of the LKP asked for an opportunity to address the legislature and formally complained about Moon’s operation of the plenary session.

“We were kept completely blind about which bills will be voted on and in what order,” he said. “The negotiation blocs should have agreed on the schedule first, and lawmakers should have been given ample time to deliberate on bills. But such custom was brutally violated. The speaker must issue an apology.”

Rep. Park Chan-dae of the DP blamed the LKP for its lack of cooperation. “We agree that the current situation is extremely lamentable,” he said. “We waited until yesterday to respect the LKP’s opinion, but we can no longer postpone urgent bills concerning the people’s lives.”

After passing the 16 bills, Moon declared a recess at 11:49 a.m., and the session was scheduled to resume at 2 p.m. The DP said earlier in the morning it will pass the budget bill during the afternoon session, since it was already overdue. The statutory deadline to pass the spending bill was Dec. 2.

The Moon Jae-in administration has asked for 513.5 trillion won ($430.9 billion) for next year’s spending. During the LKP’s boycott over the past weeks, the DP and four other opposition parties agreed to a 1.2-trillion-won cut, but the LKP is insisting that it wants to cut the proposed budget by at least 14.5 trillion won.

As of 6 p.m., Moon and the three parties were still negotiating. The DP said it will hold a voting session at 8 p.m. It remains to be seen if they will strike another deal to end the political deadlock altogether.