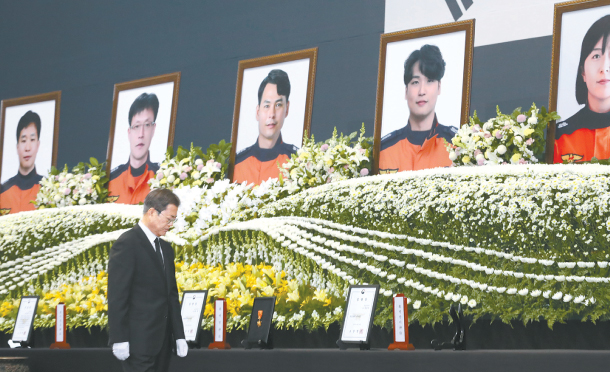 President Moon Jae-in bestows each of the five deceased firefighters with posthumous honors at a memorial ceremony at Daegu’s Keimyung University on Tuesday. The five emergency responders died in a helicopter crash off the coast of the Dokdo islets on Oct. 31 while conducting a rescue mission. [YONHAP]

President Moon Jae-in on Tuesday delivered a eulogy for the five emergency responders who died in a helicopter crash off the coast of the Dokdo islets on Oct. 31 while conducting a rescue mission.

“I would like to share my grief and consolation with all firefighters around the country who devote themselves to their work while constantly facing uncertain dangers,” Moon said at a memorial ceremony dedicated to the deceased firefighters at Daegu’s Keimyung University.

The service, which was the first time Korea’s central government arranged such a memorial since the foundation of the National Emergency Management Agency in 2004, was attended by around 1,800 people, including families of the deceased, current and former firefighters, government officials as well as ordinary citizens. Korea’s firefighters also undertake emergency response missions in non-fire related cases.

On the evening of Oct. 31, an emergency responder EC-225 chopper crashed due to still unknown reasons some 200 to 300 meters (656 to 984 feet) from the Dokdo islets, killing all seven people aboard. Five of the victims were firefighters who had arrived at the scene to rescue an injured fisherman, who also died in the crash along with his caretaker.

A massive search operation of around 3,700 personnel was mounted to search for the passengers and the crashed helicopter, but only four bodies - those of three firefighters and the fisherman - were subsequently recovered, along with the severely wrecked fuselage of the helicopter. After a combined funeral ceremony was held for the five emergency personnel at the Keimyung University Dongsan Medical Center on Friday, the government officially called off all searches for the missing victims on Sunday after consulting their families.

“The state exists to protect the lives and safety of its citizens, and emergency personnel represent the state at the scenes of disasters,” Moon said in a tribute to the deceased firefighters, who he said “lived up to the people’s faith on behalf of the state.”

While bestowing posthumous honors on each of the firefighters, whose ages ranged from 29 to 46, Moon swore to work toward revealing the cause of the accident in order to prevent similar accidents involving rescue helicopters.

The memorial service also featured solemn tributes from the victims’ colleagues who recalled the devotion shown by the deceased toward their jobs, amid wailing family members and friends.

Fulfilling the president’s campaign promise, the administration pushed through new legislation earlier this month that transformed the employment status of all firefighters across the country to that of national civil servants. The law, which takes effect from April, will put all of the approximately 52,000 firefighters in the country under employment of the central government, as opposed to the local governments that currently employ them.

With this change, the Moon administration hopes to enhance both the treatment of firefighters and the quality of their services in tandem with the government’s wider efforts to improve the country’s emergency response system by streamlining it under the now-independent National Fire Agency.