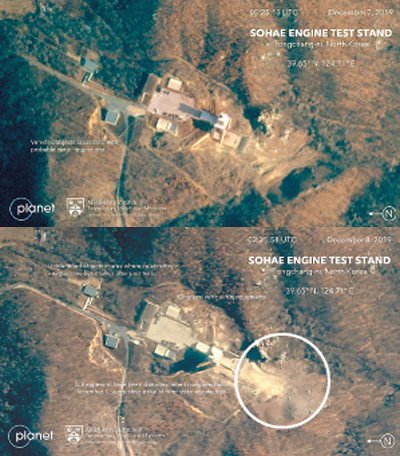 Jeffrey Lewis, director of the East Asia Nonproliferation Program at the Middlebury Institute, posted to his Twitter account Sunday satellite images of the Sohae site. Top is before a rocket engine test and above is after the engine test. [SCREEN CAPTURE FROM TWITTER]

The United Nations Security Council is set to convene today to discuss North Korea’s recent provocations at the request of the United States, according to Reuters on Tuesday.

Citing a U.S. official, the report said the UN Security Council would undertake a “comprehensive update on recent developments on the Korean Peninsula, including recent missile launches and the possibility of an escalatory” provocation on the part of North Korea.

An official from the U.S. State Department told the JoongAng Ilbo that its request to hold a Security Council meeting was made in consideration of U.S. President Donald Trump’s meeting with the head delegate of the Council’s permanent members last week.

The organization is expected to condemn Pyongyang for conducting a presumed rocket engine test at its Sohae Satellite Launching Station on Saturday, a move widely regarded as preparation - or at least a feign - for a long-range missile test sometime before the end of the year, which is the deadline set by the North for the United States to end its “hostile policy.”

Washington’s decision to seek such a meeting is noteworthy, given that the Trump administration chose to back out from signing a letter last week that would have launched a Security Council meeting on human rights abuses in North Korea. Pyongyang’s UN ambassador Kim Song last week said such a conference would represent “another serious provocation” aimed at his country that would prompt it to “respond strongly.”

The lack of support from the United States - which heads the Council this month - left the body short of the required votes to proceed with a meeting, but the human rights issue may nonetheless be included in the agenda for Wednesday’s meeting.

South Korea’s Foreign Ministry said Tuesday its delegation will also be attending the meeting despite not currently being a Security Council member state, though an official added it was unlikely the Council will produce a formal resolution.

North Korea is currently under many sanctions imposed by UN Security Council resolutions due to its nuclear and ballistic missile programs. Lifting those sanctions on its economy has been Pyongyang’s main demand of Washington in exchange for its denuclearization, but the United States insists the sanctions are non-negotiable until the North relents on its nukes.

The last few days featured a trade-off of barbs between the two countries, with Kim Song announcing denuclearization was off the negotiation table on Saturday before the regime undertook its rocket engine test. Trump on Sunday responded by escalating his rhetoric, saying North Korean leader Kim Jong-un “has far too much to lose, everything actually, if he acts in a hostile way.”

To this, North Korea retorted Monday with back-to-back statements from two of its top officials that directly addressed the U.S. president with highly charged language reminiscent of the insulting public exchanges between the two countries in 2017.

Kim Yong-chol, a vice chairman of the North’s ruling Workers’ Party and head of the Korea Asia-Pacific Peace Committee, warned that Pyongyang indeed had “nothing more to lose” and that a “surprise” action lies in store for Trump if no breakthrough in the talks is reached by the end of the year.

Just four hours later, Ri Su-yong, vice chairman of the Central Committee of the North’s ruling Workers’ Party, cautioned Trump that he “had better accept the status quo that as he sowed, so he should reap and think twice if he does not want to see bigger catastrophic consequences.”

Saying a “final judgment and decision” will be made at the end of this year by North Korean leader Kim Jong-un, Ri appeared to leave the door open for a change in circumstances, saying Kim has “neither clarified any stand yet nor made any ironic and irritating expressions toward the other party as done by someone.”

Washington, for its part, appears to be considering a major provocation from the North as a very likely possibility in the near future.

According to a diplomatic source in Seoul, the U.S. intelligence community believes such a move from Pyongyang will likely come before the end of the year, which suggests the decision to call a UN Security Council meeting may be an attempt at deterring a provocation.

What form that provocation will take remains hotly debated among analysts in the United States and South Korea, with possibilities ranging from a verbal abrogation of the North’s self-imposed moratorium on nuclear and long-range missile tests to a satellite launch using a rocket that could be repurposed to carry long-range ballistic missiles.

On Tuesday, South Korean Defense Minister Jeong Kyeong-doo expressed “deep concern” about Saturday’s engine test and called on Pyongyang to “immediately cease all acts raising military tensions” and return to “problem-solving through discussions.” The remark represented the first time a top official in Seoul described Saturday’s test as that of a rocket engine.

To monitor any unusual activities in the North indicating a rocket launch, the United States has been conducting heavy aerial surveillance around the Korean Peninsula. A U.S. Air Force E-8C Joint Stars reconnaissance plane was spotted flying over South Korean airspace on early Tuesday morning, while Seoul has said it would also enhance its monitoring efforts.