Dust from China clogs the air

Dust from China clogs the air 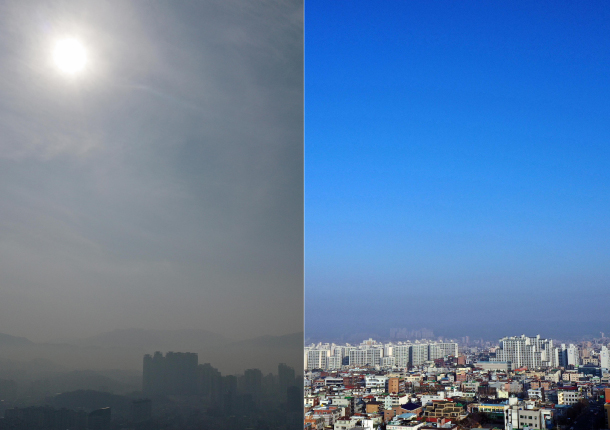 Winds blowing smog from China were the main cause of Korea’s dusty air this week. Skies are expected to clear from Thursday.

Under the emergency reduction measures, the Ministry of Environment banned the use of Grade 5 emission vehicles in Seoul from 6 a.m. to 9 p.m., and violators faced fines of 100,000 won ($84).

In Incheon, Gyeonggi and North Chungcheong, an alternate-day driving ban was implemented Tuesday for vehicles operated by public officials. Only vehicles with even-numbered license plates were allowed on the roads.

Overall, ultrafine dust concentrations surged to “very bad” levels in Seoul, Incheon, Gyeonggi and North Chungcheong Tuesday, and to “bad” levels in most other parts of the country, except the southernmost regions and Jeju Island, where the air quality was classified as “normal.”

According to the website Air Korea, run by the Korea Environment Corporation, ultrafine dust will remain at high levels in most parts of the country until today, due largely to a steady influx of dust particles from China.

In the late afternoon today, strong and fast northwesterly winds are expected to flow over the peninsula, an official from the environment corporation said Tuesday, dispersing accumulated fine dust particles. On Thursday, the skies will likely clear as temperatures fall.

To better tackle fine dust, the Environment Ministry announced Tuesday that the government was planned to make an announcement of revisions to a law related to protecting air quality today and canvass public opinion for 40 days through Jan. 20.

Under the revisions, more factories known for emitting high levels of air pollutants will be forced to report their emissions to the government using a tracking system so environment authorities can make sure they’re within legal levels.

The law also gives heavier punishments to business owners who try to tweak numbers on reports to make it appear they emitted less than they actually did.