Park Hang-seo pulls it off again

Park Hang-seo pulls it off again 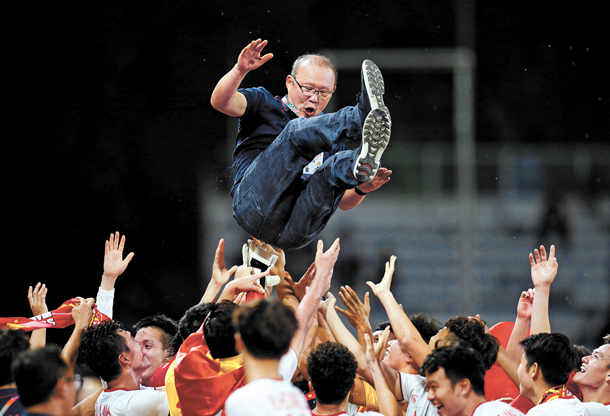 The Vietnamese U-22 football team head coach Park Hang-seo and his players celebrate after winning gold at the 2019 Southeast Asian (SEA) Games by defeating Indonesia at Rizal Memorial Stadium in Manila on Tuesday. [REUTERS/YONHAP]

Park successfully led the U-22 Vietnamese football team to win gold at the Southeast Asian (SEA) Games by defeating Indonesia 3-0 at Manila’s Rizal Memorial Stadium in the Philippines on Tuesday. With a win, Vietnam won gold for the first time as a unified country.

The young squad’s star player Doan Van Hau led the team by scoring the opening goal with a header in the 39th minute. Then, Do Hung Dung doubled Vietnam’s lead with another goal in the 59th minute. Shortly after, in the 70th minute, Doan once again helped Vietnam to secure its victory by scoring the team’s third goal of the match.

With the win, Vietnam finished the tournament undefeated as they picked up six wins and a draw throughout seven matches.

Although Park led his squad to another historic achievement on Tuesday, he wasn’t able to witness the victory, as he was given a red card for his aggressive reaction to the referee when he was complaining about a rough foul from Indonesia.

However, Park still made his way back to the field after the final whistle and celebrated the victory with the players.

“First of all, I would like to give this victory to the people of Vietnam, those who love Vietnamese football, the Vietnam Football Federation and all the clubs,” Park was quoted as saying on Vietnamese daily Nhan Dan. “To be honest, I also want to give this victory not only to the players but also to members of the coaching staff and other supporters who are always there to assist the whole team.”

A win also allowed Park to achieve his long-term goal with the Vietnamese squad.

“When I was appointed to the position as head coach of the Vietnam team, I had dreams of winning the top title in Southeast Asia and also the gold medal at the SEA Games with Vietnam,” Park was quoted as saying. “This is the dream that we have achieved after 60 years. In fact, this victory is on the merit of the predecessors and the seniors who have accumulated to this day.”

After briefly coaching the Korean U-23 team and K League teams, Park was appointed head coach of the Vietnam national football team in September 2017. Just three months later, Park led Vietnam to a historic run at the 2018 Asian Football Confederation (AFC) U-23 Championship in China, where the team finished as runner-up.

The team played fiercely against Australia in the preliminary round before beating Iraq in the quarterfinal and Qatar in the semifinal. But as they surged into the finals, the team hit a snow storm, literally. Many of the team’s members had never seen snow before, and the weather conditions unsurprisingly affected their play. Still, they pushed through a 1-1 tie until the final minutes of overtime, when Uzbekistan scored the winning goal.

Then, Park led Vietnam’s U-23 team to another miraculous run at the 2018 Asian Games. For the first time in history, the team advanced to the semifinals. Vietnam ultimately lost to Korea 3-1. Finishing the year, Park once again worked his magic by leading the Vietnamese football team to win the AFF Suzuki Cup in December last year, for the first time in a decade.

With the new contract, Park is continuing to coach both the men’s senior and the U-23 national teams.

Just a month after signing, Park made history again. Now that Vietnam is done with the 2019 SEA Games, the U-22 squad and Park will visit Korea to train for the AFC U-23 Championship in Thailand in January next year. This also serves as a qualifier for the 2020 Tokyo Olympics.