What went wrong for Park Sung-hyun?

What went wrong for Park Sung-hyun?

Park Sung-hyun finished her 2019 season ranking second in the Rolex women’s world ranking, the exact same position she ended the 2018 season with. 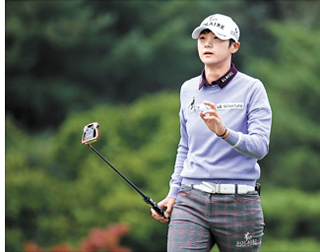 But dive a little deeper into the numbers, and it’s clear that this year has actually been a little disappointing for Park.

Over the past few seasons, Park has always been in the headlines when it comes to the end of the year.

Back in 2016, Park dominated the KLPGA Tour by winning six events, and once the season ended, she announced that she’d be playing on the LPGA Tour. When she joined the LPGA Tour in 2017, Park won the Rookie of the Year and Tour’s Player of the Year award, along with Ryu So-yeon.

Although she didn’t win any individual awards last year, Park still made headlines with three wins on the LPGA Tour.

Before this season started, Park announced that her goal for the season was to win five tournaments, including a major. She got off to a great start by winning two tournaments in the first half of the season, but over the last three months, things really went wrong.

At the Women’s British Open in August, Park finished eighth. Not an especially auspicious finish for the world No. 2, but things quickly got much worse.

In the seven tournaments she competed in from August to November, Park failed to record a top-10 finish. This was the longest time she has ever failed to finish within the top-10 on the LPGA Tour.

At the Indy Women in Tech Championship in September, Park missed the cut, and at the CME Group Tour Championship, the season finale, Park withdrew right after the third round. This was the first time that Park has ever withdrawn from an LPGA event.

As a result, Park finished without a season-ending title, as she finished seventh in the money ranking and fifth in Player of the Year and average scoring rankings. She also failed to walk away victorious from any of the five major tournaments.

Although winning two tournaments is still an accomplishment, it’s not a Park Sung-hyun accomplishment. This season, Korean golfers managed to win 15 tournaments on the LPGA Tour, tying the record set in 2015 and 2017, with world No. 1 Ko Jin-young winning four and Kim Sei-young getting three.

Looking at her struggle at the end of the season, Park was very inconsistent. At the season finale, Park averaged 32 putts per round. This is disappointing considering her average for the 2019 season was 29.88.

“At the season finale, she withdrew because of her condition and due to her left shoulder pain,” Park’s management said. “Just as how her exhaustion stacked up, her pain also stacked up. That was the problem.”

Fans remain hopeful that her struggle is temporary. Last season, Park also struggled by missing the cut in three straight tournaments, but made quite a comeback by winning the KPMG Women’s PGA Championship.

“Each player has a different cycle,” said JTBC Golf commentator Han Hee-won. “Since Park is aggressive and hits the ball far and straight, she was probably at a disadvantage in tournaments in the second half of the season because the courses were less difficult. She’ll get through it because she has experience. If she works on her short game during offseason training, she’ll make her way back up.”

Before Park starts her offseason training, she will now be focusing on rehabilitating her shoulder in Korea. Currently, Park’s goal is to return to the Tour by mid-February.

Park will have to recover her shoulder and her form as quickly as possible and return to the LPGA Tour strong in order to secure a spot at the 2020 Tokyo Olympics.

The players that will compete at the Olympics will be determined according to the world ranking as of June 29 next year.

The top 15 golfers in the world ranking will automatically qualify, with a limit of four golfers per country within this category.

While Park is ranked second, right behind Ko, two more Korean golfers - Kim Sei-young and Lee Jeong-eun - are ranked inside the top 10. On top of that, Kim Hyo-joo is ranked 13th and Park In-bee is ranked 14th.