Academics discuss the power of BTS

Academics discuss the power of BTS 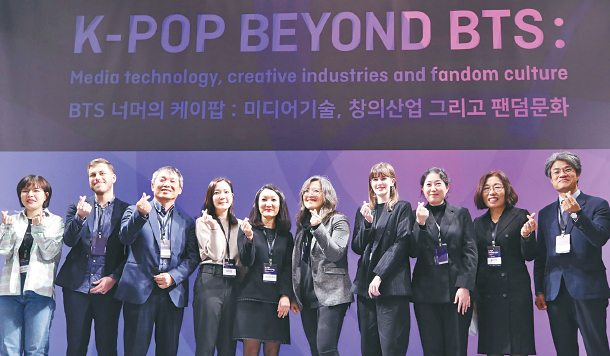 BTS is more than just a boy band - the group has become a cultural phenomenon that has changed K-pop fandoms as well as how people consume many forms of entertainment.

Looking further into the dynamics that drive the Korean Wave (Hallyu) centered on BTS and its loyal ARMY, the Korean Society for Journalism & Communication Studies (Ksjcs) held a seminar on Wednesday titled “K-pop Beyond BTS: Media Technology, Creative Industries and Fandom Culture” in the Grand Ballroom at Yonsei University’s Baekyang Hall in western Seoul.

Organized by the Division of Culture and Gender Studies at Ksjcs and sponsored by Big Hit Entertainment, the seminar began with an opening address from Kim Chun-sik, president of Ksjcs and professor of media and communication at Hankuk University of Foreign Studies, followed by a speech from Professor Hong Seok-kyeong from the Seoul National University Department of Communication.

“BTS shows more than just music, but also the fact that they are people who live in the same generation as us,” said Kim. “The focus today is on its communication with fans and how it transcends various mediums, resulting in people feeling that they are all same people.”

After Hong opened up the seminar with a presentation titled “Landscape of Hallyu Studies: New Prospects Since BTS,” explaining that BTS has opened up a new chapter in Asian and Korean cultural studies in recent years, a day of K-pop research followed.

The first session touched on the new landscape of K-pop since BTS, followed by a session on BTS and its transcultural fandom, a session on globalization and cultural hybridity and a final session on various platforms and media technology.

Twelve teams of researchers - including professors, students and doctors - made presentations and took questions from those in attendance.

“K-pop has met a new phase in its studies. With a younger generation of researchers and consumers, I hope to see a new generation of studies to come,” Hong said.