Music industry scandal is hard to pinpoint in digital era: As music stars accuse others of sajaegi, no one is sure how to define the crime

Music industry scandal is hard to pinpoint in digital era: As music stars accuse others of sajaegi, no one is sure how to define the crime 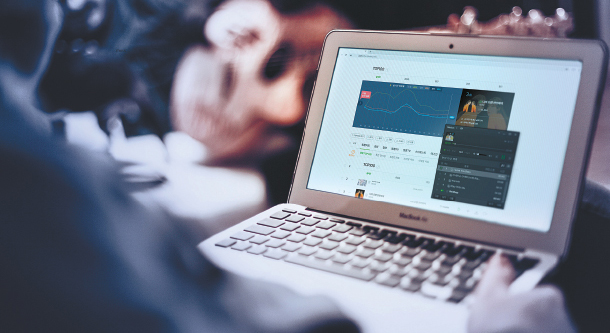 Followers of the Korean music industry are familiar with frequent accusations of sajaegi, the act of manipulating the charts with fake IDs to stream or download songs online, but recently it has become one of the hottest issues in all of entertainment. When little-known acts began appearing at the top of the charts recently, beating out big-name K-pop stars and their hit songs, eyebrows started to raise across the industry, and artists began to speak out.

But two weeks after the controversy that rocked the local music industry began, the discussion has turned to a question that’s perhaps the hardest one to tackle: What does sajaegi look like today, and how do we prove it exists?

As defined in the dictionary, sajaegi refers to the act of buying something in bulk knowing that it will sell at a higher price in the future. In the music industry, it refers to the act of buying albums in bulk to increase the sales of a particular act and help them perform well on the charts. In the digital era, the word has come to stand for manipulating the charts on various music streaming services by using multiple IDs to stream or download an artist’s music so that they appear on the charts.

All six acts mentioned by Park swore to take legal action against the singer, especially Vibe, a veteran duo who debuted in 2002, who promised it was “innocent and will get to the bottom of this.”

Other singers have voiced their opinions on the matter, including Jin of boy band BTS, who, while accepting the award for Song of the Year at the 2019 Mnet Asian Music Awards on Dec. 4, said, “I hope that there comes a time when all of these songs are recognized. Wouldn’t it be better to create music honestly rather than illegally?”

Singer Heize also touched on the matter while accepting the Best Hip Hop and Urban Music award at the same event, saying, “I hope that a fair music environment is made where the hard work of all artists is never wasted.”

While stars have just recently begun to publicly voice their concerns about the practice, it has long been an issue lurking under the surface within the industry. The problem is that there is no consensus on what exactly sajaegi actually means in the smartphone era. While the Music Industry Promotion Act clearing defines sajaegi as “unfairly buying up music records,” the term is too vague to provide a clear guideline in the current situation. 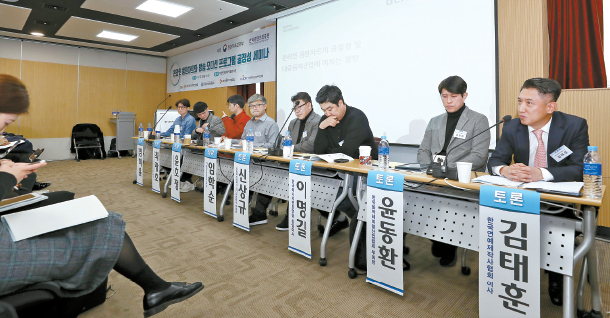 Experts from the music industry take part in a seminar on the recent sajaegi issue from left: Lim Hee-yun, reporter of the Dong-A Ilbo; Steve Choi, director of Korea Music Content Association; Professor Yoon Ho-jung of the business school at Sejong University; Professor Yim Hak-soon of cultural content at The Catholic University of Korea; Shin Sang-gyu, the head of the media content department at Dreamus; Lee Myung-gil, director of the Korea Management Federation; Yoon Dong-hwan, vice chairman of the Record Label Industry Association of Korea; and Kim Tae-hoon, member of the board at the Korea Entertainment Producer’s Association. [NEWS1]

On Monday, entertainment industry experts gathered together for the “Online Music Chart and TV Audition Program Fairness Seminar” held at the National Museum of Korean Contemporary History in central Seoul. The event was held by the Korea Creative Content Agency and sponsored by the Korea Music Copyright Association, the Federation of Korean Music Performers, the Recording Industry Association of Korea and the Korean Society of Composers, Authors and Publishers.

“The word sajaegi is actually an inaccurate [description of what is happening],” said Lee Myung-gil, director of the Korea Management Federation. “Right now, we are in a situation where we are suspicious of everything that we see, even though we don’t exactly know what it is. It is illegal? Or is it just something that’s happened because of a change in the different marketing strategies people have adopted? It can be dangerous in the long term to call this ‘sajaegi’ when we can’t put a finger on what it is. We need a clear guideline.”

According to Yoon Dong-hwan, vice chairman of the Record Label Industry Association of Korea, the way that people push their songs up the charts through sajaegi is by promoting their songs through social media - namely Facebook - for weeks before its release. Around five to 10 posts are uploaded ahead of a song’s release, and agencies pay the platforms millions of won to have the post spread to people who have not followed the page that it is posted on. While no direct relationship between these marketing strategies and the number of streams have been proven, many of the singers being accused of sajaegi have readily used these methods to make it look as if their chart rankings are justified, according to Yoon. 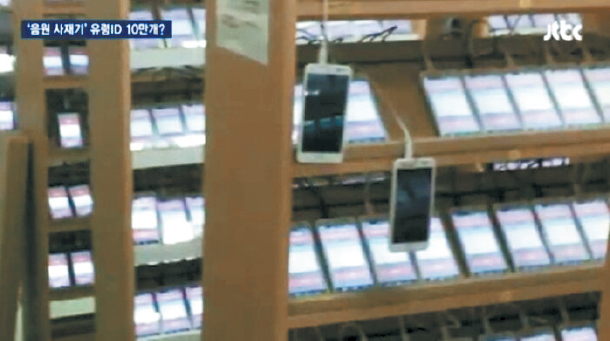 “I’m not saying that these singers have rigged the charts. It may even be unfair to accuse them of sajaegi without any proper evidence. But it is crucial that these so-called marketing companies clear their name by revealing all the data to bring the truth to light. And honestly, if there’s nothing illegal about them, I would like to work with [these marketing companies] too,” he said.

In 2015, JTBC reported that there was a “sajaegi factory” where thousands of phones were allegedly repeating certain songs at the same time. The location of the “factory” was not specified, but it was the first time that a picture of the site had been seen by the public.

But according to Steve Choi, director of the Korea Music Content Association, it’s “almost impossible” to track down sajaegi in the ways we think it exists, because there’s no way of distinguishing it from what fans have been doing for years.

“There needs to be the same regulation for the same act. But for years, fans of K-pop groups have been pushing certain songs up the charts by any means possible. Frankly, it’s the same pattern but just coming from groups or singers that don’t have a set fan base. It’s not a matter of who does what because it’s hard to pin down on exactly what makes sajaegi sajaegi.

“We could even think that the paradigm has shifted in the music world. It could be that the listeners have built up fatigue from having songs from K-pop groups on the top of the charts and they actually want to return to ballads. We can’t know,” Choi said.

Kim Tae-hoon, a board member of the Korea Entertainment Producer’s Association, added, “A fundamental part of the problem occurs from the fact that we were listening to music on CDs and have quickly moved to digital devices. And for these different methods, the industry has taken on different marketing strategies. I believe that this could be a part of that greater change. We all need to think about what parts make the game unfair and how we can change the current environment.”