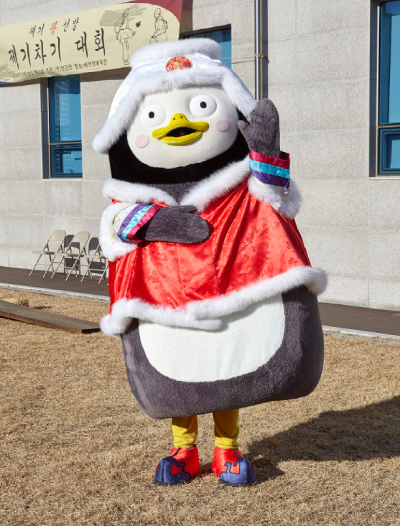 Pengsoo, the enigmatic, norm-busting, 7-foot-tall penguin character, is decked out in colorful hanbok for a good reason.

The wildly popular celebrity, with a backstory that includes swimming from the South Pole, has made his advertising debut.

Korea Ginseng Corporation (KGC) announced Tuesday that it has filmed a TV commercial for CheongKwanJang red ginseng products for the Lunar New Year holiday season, and the ad features Pengsoo himself.

KGC released a photo of Pengsoo dressed up in the traditional Korean clothing and celebrating Lunar New Year. The advertisement, which was produced at the Educational Broadcasting System (EBS) headquarters in Goyang, Gyeonggi, last Friday will be released in January.

The talking penguin claims he is 10 years old, and says he swam to Korea to become a video artist. He is now one of the most popular stars in Korea, rivaling BTS.

As of Tuesday, Pengsoo’s Giant Peng TV YouTube channel had more than 1.26 million subscribers. That is up from just 100,000 in September.

The character has already collaborated with a number of companies and public institutions, and all manner of Pengsoo goods are in the works.

“Pengsoo was selected as the model as the character embodies the brand image of KGC, which is sending love and warmth,” said KGC.

The story line of the commercial tells of Pengsoo missing its parents in the South Pole ahead of the Lunar New Year holiday season.

“Online events will be held along with the advertisement,” said Min Gyeong-seong from KGC marketing team.

Retailers have been aggressively chasing the oversized bird, as people in their 20s and 30s are mad about Pengsoo.