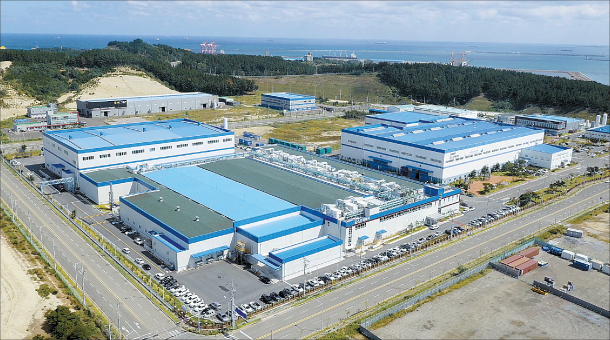 Jason Few, the CEO of FuelCell Energy (FCE), recently visited Korea to discuss a potential collaboration with local fuel cell producers.
Fuel cells produce electricity through an electrochemical reaction between hydrogen and oxygen and leave only water and heat as a by-product.

Fuel cells do not require any of the combustion processes found in conventional generators that run on coal and fossil fuels and can provide stable electricity compared to wind and sunlight generators.

Up until July, FCE and Posco Energy were facing a legal dispute, but the two have reconciled dramatically, drawing attention due to a potential collaboration between the two companies.

In order to internalize its fuel cell business department and to increase its competitiveness, Posco Energy established Korea Fuel Cell on Nov. 5.

Since it was the first discussion in regards to its JV action plan, both sides had big expectations.

Although FCE initially offered the negotiation, it has been acknowledged that FCE came up with different ideas from the memorandum of understanding (MOU) which has led to no outcome during their stay in Korea.

According to a domestic fuel cell industry official, it is not the first time that FCE has shown such action during negotiation and no changes have been made, although Posco Energy pressured FCE by selling the FCE stocks that it owned.

Posco Energy sold a total of 1.8 million FCE stocks that it possessed in November 2018 and January 2019.

Posco Energy accelerated in its efforts to negotiate on JV with FCE but had to step down from the negotiation due to FCE’s inconsistent stance.

When Posco Energy started developing its domestic fuel cell market, it once marked its market share at 90%.

With the advent of competitors such as Doosan and SK entering the fuel cell market and the slump in negotiations with FCE, the company’s market share dropped to about 40%.

“Korea is one of the biggest markets for FCE and it has been noted that Posco Energy has offered the details of the business and cooperation plans to FCE. The only thing left is for FCE to face the negotiation diligently,” said an official in the fuel cell industry.

As the negotiations between Posco Energy and FCE ended without any success, the domestic fuel cell industry guessed that the visit to Korea was for FCE to increase its stock prices before a general meeting of stockholders to be held on Dec. 13.

FCE stock prices have constantly fallen under 1 dollar since mid-October 2018, causing the stock to face a delisting warning from the NASDAQ, but through stock consolidation in April 2019, it has stepped away from a crisis.

Since then, the stock price has constantly dropped, and it faces a delisting warning again in July 2019 and is now recording about 0.5 dollars per share.