‘Black Dog’ tells the teacher’s side of Korean education

‘Black Dog’ tells the teacher’s side of Korean education 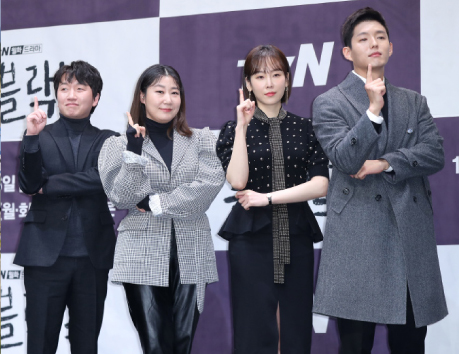 The cast of the upcoming tvN drama series “Black Dog” guarantees that their portrayal of teachers will be more “real” than any other drama series, thanks to the meticulous work of director Hwang Joon-hyuk.

Although the drama is set at a private high school in southern Seoul’s competitive Daechi-dong neighborhood, the show is more like a documentary that captures the everyday lives of teachers rather than putting the spotlight on the students.

“If ‘SKY Castle’ told the story of the aftermath of relying too much on private education, we put focus on how public education prepares children to be admitted into universities,” actor Ra Mi-ran said during a press conference on Wednesday. “In fact, parents of high schoolers might learn a few things about how to prepare to send their children off to college. That is how detailed and real the drama is.”

While preparing to play Go Ha-neul, a rookie substitute teacher on a one-year contract, actor Seo Hyun-jin interviewed several teachers in the same position as her character to learn about the role.

“It is true that what we think of teachers is different from the past,” Seo pointed out. “[In the past,] school teachers were considered to be a model that students looked up to - adults that students respected. But, that may no longer be the case now. The more I talked with the teachers and learned about the role, the more I realized that the teachers themselves still have that pride, a sense of vocation as a teacher, whether or not they were regular or substitute teachers. This is a job that you can’t do if you don’t care and have aspirations for your students.”

Director Hwang also pointed to how authentic the characters are in the drama.

“I personally hope that people of all generations can watch the drama and wonder, ‘How are the actors so much like the teachers I had during my school years?’” Hwang said. “That is, I think, the biggest merit of this drama. The script itself was very detailed from the start, and it points out the irony of the educational environment, but not in an uncomfortable way. Viewers can see how teachers struggle with their personal and vocational worries amidst tears and laughs.”

“It definitely does not take on the tone of accusing or criticizing anybody, but still manages to point out the current problems in the Korean education system through the troubles of the teachers,” Ha Jun said, explaining the drama’s title “Black Dog,” a reference to Black Dog Syndrome.

The syndrome refers to the phenomenon in which black dogs are passed over for adoption in favor of lighter-colored dogs.

“Like the title implies, maybe teachers have their own personal stories, or even traumas from the classroom, but it’s about how they overcome it through love and compassion.”