Sohae site is readier than ever

Sohae site is readier than ever 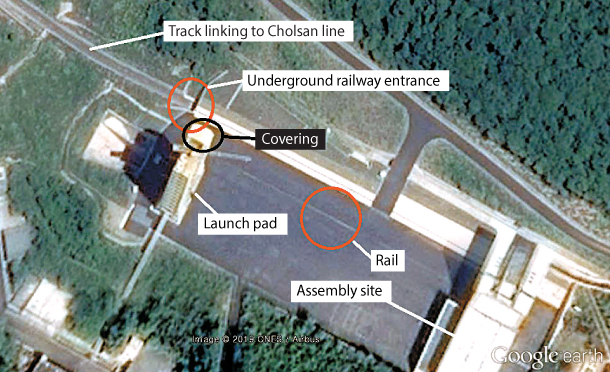 New infrastructure observed on satellite footage of the Sohae Satellite Launching Station suggests North Korea has streamlined missile launch processes over the past few years amid signs that a long-range missile test may be coming.

A new unloading area has been built underneath the Sohae launch site in Tongchang-ri, North Pyongan Province.

An existing railway connecting a station at Cholsan County to the launching station at Tongchang-ri has also been extended to connect to that underground unloading area.

In addition, satellite footage showed an area believed to be used to assemble rocket components is now connected to the launch stand 150 meters (492 feet) away by a rail line, suggesting that once missile parts are assembled, they can be rapidly transported to the launch pad.

In the wake of a presumed rocket engine test by North Korea on Saturday, these previously unseen facilities indicate the regime could be preparing an intercontinental ballistic missile test before the end of this year.

According to a South Korean government official who spoke to the JoongAng Ilbo on Wednesday, North Korea has “consistently proceeded with construction and renovation efforts” at the Tongchang-ri site after a satellite launch failure in April 2012, building an assembly area in one corner of the site as well as a rail line connecting an underground facility beneath the launch pad to the exterior.

“Before, [North Korea] used to transport missile components built at a plant in Sanumdong near Pyongyang on railcars to a station located 1.2 kilometers [0.75 miles] away [from the Sohae site], from which they would then be loaded onto trucks to be carried to the launch site,” the official said.

“But after the rail line was connected, the rail cars are being moved directly to the underground facility beneath the launch site.”

A comparison of satellite footage of the site from 2014 and this November confirmed this testimony, showing a clear railway leading from the Cholsan line to an assembly site at Tongchang-ri, as well as an underground area below the launch pad.

According to Ahn Byung-min, a leading researcher at the South Korean government-run Korea Transport Institute, the regime dismantled a branch line of the railway linking Pyongyang to Sinuiju and used its parts to build the rail connecting the Sohae site to the Cholsan line.

When the Sohae missile site was completed around early 2011, North Korea extended a secondary rail line connecting the Pyongyang-Sinuiju railway to Cholsan all the way to Tongchang-ri in order to serve the launching station. But these recent observations show the line has been extended even further to just directly below the rocket launch pad at the site.

This new infrastructure, experts say, is believed to serve the purpose of concealing North Korea’s missile activities from prying foreign eyes. Lee Chun-geun, a senior researcher at the Science and Technology Policy Institute in South Korea, said the North’s ability to transport missile components directly underneath the launch site could significantly reduce launch times as well as exposure.

“To fire a long-range missile or a satellite, it is most efficient to assemble the projectile in a vertical fashion and transport it to the launch pad while maintaining that position,” Lee said. “But North Korea didn’t have the infrastructure or technology to do this, so it used to build the components in places like Pyongyang and then transport them to an area in front of the launch site where they would be assembled in pieces.”

Bringing the components indoors to an underground facility beneath the launch site could reduce the risks of exposure and cut back on time, Lee added.

The North also installed screens covering the assembly area and underground launch facility at the Sohae station, presumably to hide activities. South Korean authorities believe the station has facilities to allow fueling for rockets hidden behind these covers.

Such attempts at concealment have made it difficult to observe the North’s missile activities at the Sohae station, sources say. One government source who requested anonymity said that while there have been frequent reconnaissance attempts by the United States and South Korea around Tongchang-ri, including the use of the U.S. KH-11 spy satellite, they have run into limitations observing what goes on underground at the site.