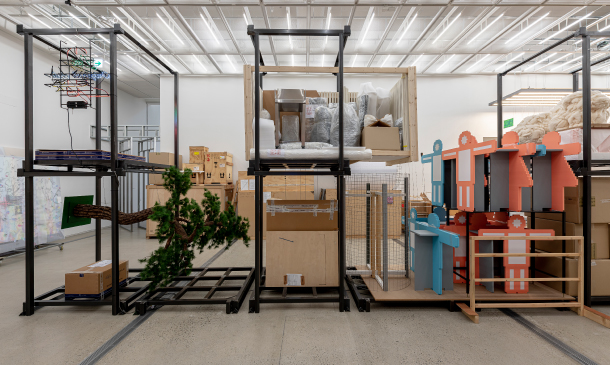 The storage space within Jewyo Rhii’s “Love Your Depot” inside the Museum of Modern and Contemporary Art Seoul contains works by other artists, such as Hong Seung-hye’s human figure installations at right. [MMCA]

“Where do you keep your works after the exhibition?”

When artist Jewyo Rhii was introduced to a younger artist upon the latter’s request, she was expecting the usual round of questions she usually gets from her students and other up-and-coming artists - queries about where she gets her inspiration from, how she makes her work and how she connects with others in the field. But this time, Rhii was confronted with a question that she had not thought of herself: How do you store your works of art that are not sold to collectors or are owned by museums?

“I always thought about it, but it wasn’t something that I talked about,” Rhii said. “Because, as with everything else that doesn’t have a space at home, I keep them in my warehouse - locked up and lights off. That’s what happens with the things in there. It’s locked up, and the lights go off. You don’t talk about them.”

Continuing the conversation, Rhii confessed that she had thrown away many of her works that she just couldn’t find the place for. It wasn’t something that she wanted to do, but she was forced to do so because of a lack of physical space. Sometimes, she would ship her work to be displayed in other countries and tell them to throw it away once the exhibition was over because they wouldn’t cover the millions of won needed to pay for the shipping back to Korea.

The situation is much worse for younger artists, whose exhibitions last for mere days at a certain venue, and once it is done, they’re forced to take the work back to their studio apartments. She had even heard of artists who took their works apart with their own hands to throw away after being exhibited, because it was too big to be discarded at once.

“They made their work, bit by bit for months, but they had to take all of that apart,” she said. “Honestly, if that happened to me, I would have just fell apart and not be able to make anything else in the future. But since I was faced with the question, I promised the artist that the next time we met, I would bring this [question] to the table for everyone else to see. So this was me keeping that promise.” 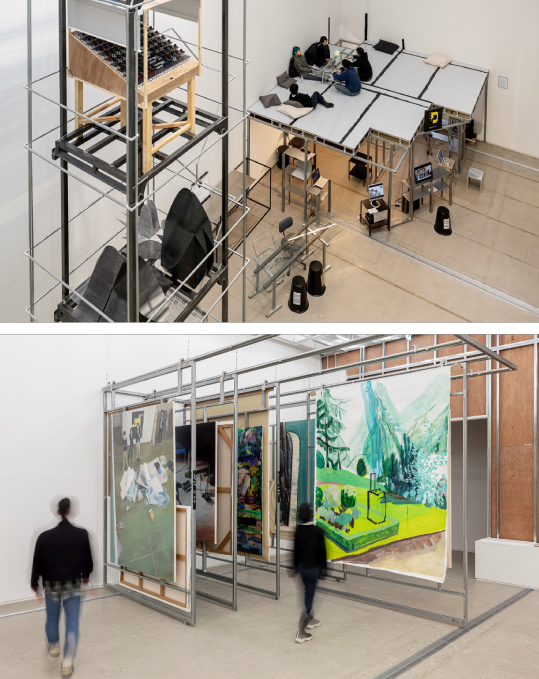 Jewyo Rhii’s “Love Your Depot” takes place in three dimensions - at the “Team Depot” space where people actually work and put on performances, top, and online, where the works that are on display inside the physical storage space can be posted, above. [MMCA]

Her latest work “Love Your Depot” on display at the Museum of Modern and Contemporary Art (MMCA) Seoul in central Seoul, thus looks more like a storage warehouse for art rather than a piece of art itself, which is why it’s crucial that viewers understand the story before they visit the exhibit.

Rhii was awarded the Korea Artist Prize by the MMCA and the SBS Foundation on Nov. 28, and her project - along with works by Young In Hong, Hyesoo Park and Ayoung Kim - is currently on display at the MMCA. It was chosen for “Jewyo Rhii’s bold and clever way of dealing with a problem that may change the paradigm in the contemporary scene,” according to Yoon Bum-mo, director of MMCA. SBS will be airing a documentary about the four artists before the exhibition ends on March 1.

Rhii was born in 1971 and has always pursued being an artist, but mostly outside of Korea. Although she received both her bachelor’s and master’s degrees in fine arts, she’s known for her usage of various mediums ranging from paintings, books and installations to video and performance. What did define Rhii’s art was her “personal and intimate” works, which revealed how the work of an artist is created through such a personal and intimate process that requires the artist to spend hours, days and months alone.

“I didn’t like talking about the greater things because I believed that the practice of an artist was a private one,” she said. “But I’ve realized that a sort of a myth is involved there, and things have changed. A painter once spent years by themselves, but the way things are made is different now.”

What hasn’t changed, however, is the fact that as long as artworks are made, there will always be a need for a place to store them. So for this “project” - a term she prefers to artwork - Rhii chose to tackle the problem before making her own work again. It’s the beginning of figuring something out for herself, but it’s also calling out all artists and creators in the field right now. All the works stored in “Love Your Depot” are thus works from fellow artists such as Hong Seung-hye, Hwang Soo-yeon, Jung Ji-hyun and Park Ji-hye. Park was actually the young artist that asked the question to Rhii three years ago.

“Love Your Depot” has three levels: the storage space, the “Team Depot” project and the online archiving that continues throughout the exhibition. Through the three projects, “Love Your Depot” is about “prolonging the lifespan of artworks” according to Rhii. Team Depot consists of separate creative studios that create a “new and free” archive of the works in the storage that’s fun to look at online.

“If the storage space is both a practical and aesthetic storage warehouse, then Team Depot is about opening up a new sphere of study that’s not limited to the conventional norms of an archive. It could be interviews, videos, posters - it doesn’t have any boundaries,” she said.

Having created her first work that is an expression of solidarity with other artists in the field, Rhii credits her peers for having made the project possible. “Love Your Depot” has allowed her to publicly talk about an issue in the art world, and though she may not actually make a significant change, she will be sure to keep on with this project for as long as she can.

“Having [North Korea] above our heads all the time, it’s impossible for artists in Korea to create freely without the restrictions of ideologies or restrictions,” she said.

The fact that there aren’t many pictures of Rhii online is also a part of her endeavors as an artist in Korea.

“I’m an artist, but people - especially in Korea - always demand that I show my face. But when I do, the discussion suddenly turns from my works to my looks, like my face or how I’m dressed. I want to see how long I can pursue my art without having my face out,” she said.