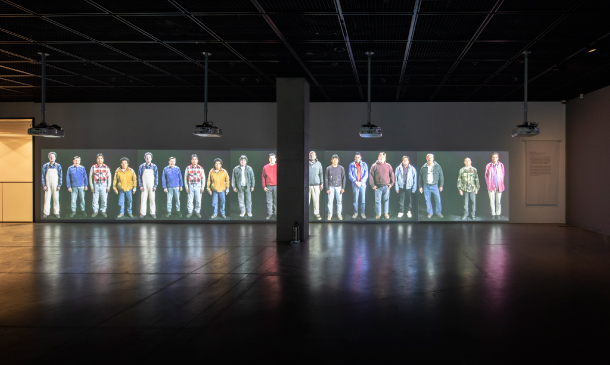 “Viewer” (1996) by Gary Hill on display at “Momentombs” at the Suwon Museum of Art, Gyeonggi, reverses the role of the audience and the subject at an art museum through the idea of a human gaze. [SUWON MUSEUM OF ART]

To provide a look at the history of video art in Korea, the Museum of Modern and Contemporary Art (MMCA) Seoul is presenting an exhibition at its Gwacheon branch in Gyeonggi, showcasing video art from the 1970s to 1990s. Meanwhile, at the Suwon Museum of Art (SUMA) in Gyeonggi, Gary Hill presents his works through “Momentombs,” showing a new way of experimenting with the medium.

“Korean Video Art From 1970s to 1990s: Time Image Apparatus” began on Nov. 28 at the MMCA’s Gyeonggi branch, “surveying the 30-year history of Korean video art from 1970s to 1990s” according to the museum. It features over 130 works by 60 of Korea’s top video artists who experimented with the then-novel medium in a variety of ways. The exhibition follows a chronological order that’s also divided into subsections according to different themes that the artists pursued.

Kicking off the show is Kim Kulim’s “Civilization, Money, Woman” (1969) and “Light Bulb” (1975), examples of some of the earliest works before famed video artist Nam June Paik entered the scene, when artists focused on the physical presence of TVs in their works. For instance, Park Hyunki juxtaposed TV sets with stone, wood or metal to show video not as a vessel or digital contents, but a material for physical installations.

Be sure to take as much time as you can to understand the works in full, as video art demands viewers take in the entire piece.

“Video art started in Korea around the late 1960s to early 1970s, which is considered quite early in the timeline of video art in Asia. In that context, there is both great national and international interest in the history of Korean video art, which is why we believe that this exhibition is a timely one to come from the MMCA,” said Bae Myung-ji, who curated the exhibition along with Kim Hyun-mi.

If the MMCA’s exhibition is a comprehensive look into Korean video art, the exhibition at the Suwon Museum of Art is a look into the history of a single video artist: Gary Hill. Through “Momentombs,” the exhibition takes a look at Hill’s works from the 1980s to his most recent works, which helped to define him as one of the leading video artists of our time.

Hill’s works are very complicated - but also very intuitive at the same time. Many of his works use English narrations recorded by the artist himself, but there are still elements that enable the audience to understand what is going on by following along with the visuals. For instance, “Viewer” (1996) has visitors to a museum think about themselves as the subject of observation, reversing the role of the gaze.

“I Believe It Is an Image in Light of the Other” (1991-1992) also reverses the role of a book as the vessel of contents to a screen of light, which is enough to grasp without actually understanding the English text inside the books.

The MMCA exhibition is open until May 31, while the SUMA exhibit will run until March 8.