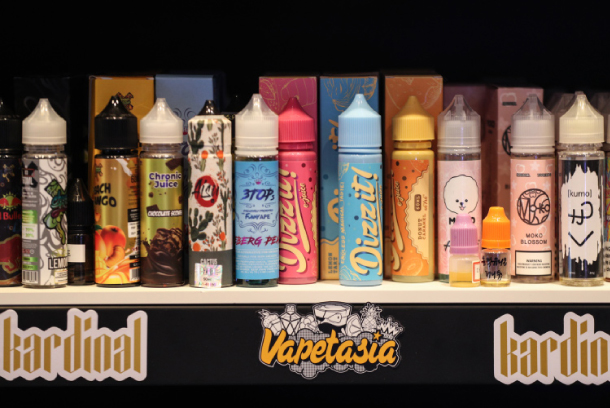 E-cigarette products are displayed at a store in Seoul on Thursday. [NEWS1]

Health authorities Thursday warned people about the dangers of e-cigarettes and advised them to await its full research results in the first half of next year.

But THC or tetrahydrocannabinol, the chemical responsible for marijuana’s psychoactive effects, wasn’t found in any of the cigarettes, according to the Ministry of Food and Drug Safety.

Solvents - propylene glycol and glycerin - were found in all products.

Flavoring agents that may cause lung damage - diacetyl, acetoin and 2,3-pentanedione - were found in 43 types of e-cigarettes.

The authorities said further research was needed on other flavoring agents.

The ministry particularly warned about vitamin E acetate, which the U.S. Centers for Disease Control and Prevention identified as the possible cause of hundreds of people getting sick in the United States this year. The ministry said it is discouraging cigarette makers from manufacturing, importing or distributing e-cigarettes containing the substance.

The government said it will monitor corrective measures taken by the United States and conduct additional investigations of harmful substances in e-cigarettes.

The ministry plans to investigate harmful ingredients that affect the human body when inhaled in the first half of next year. It will look into vitamin E acetate, the three flavoring agents and nicotine.

The 13 types of e-cigarettes were found to contain between 0.1 to 8.4 parts per million of vitamin E acetate.

Research on such substances will be reviewed by experts, and the results will be announced in the first half of next year.

“Following the analysis of ingredients by the Ministry of Food and Drug Safety, we have discovered e-cigarettes distributed in Korea contain harmful substances like vitamin E acetate and flavoring agents,” said the Ministry of Health and Welfare, in a statement. “We once again stress that the government recommends halting the use of e-cigarettes until research on the harmfulness [of the substances] to the human body is concluded.”

The government issued a strong warning about e-cigarettes in September. In the United States, hundreds of people are said to have died or gotten sick from vaping.