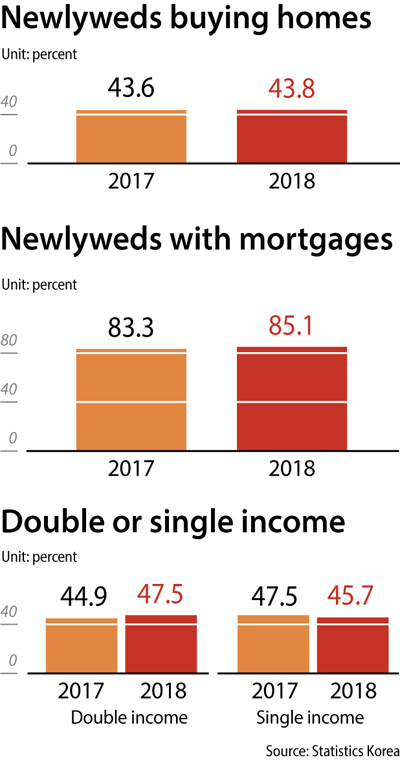 Newlyweds are leveraging up to buy property, driven by the fear of missing out and helping to push up prices that the government is desperately trying to cap.

According to Statistics Korea on Thursday, 461,000 newly married couples purchased real estate in 2018 out of 1.05 million new couples that year. The 43.8 percent rate is up 0.2 percentage points on year.

Newlyweds owning more than three units dipped, from 1.4 percent in 2017 to 1.3 percent.

The biggest increase was in high-end real estate.

The most popular form of housing was an apartment, with 67.6 percent of the newlyweds living in apartments, while 15.2 percent moved into standalone houses.

The study also found that borrowings by newlyweds are up. A total of 85.1 percent of newlyweds took out loans from financial institutions, up 1.7 percentage points on year.

The total does not include money borrowed from loan sharks.

Of the couples in the survey, both individuals worked in 47.5 percent of the cases. That’s an increase from 44.9 percent of the newlyweds with double income in 2017.

The study has found that the percentage of couples without children is growing as well.