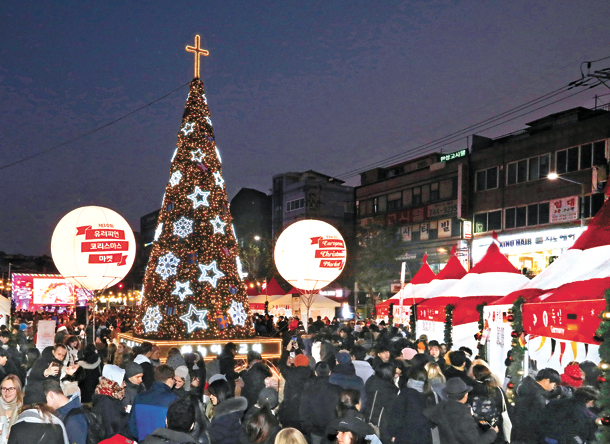 The Christmas spirit was in the air at the Seongbukcheon Fountain Square in central Seoul last weekend as people braved the freezing temperatures to queue for Czech goulash or Ukrainian varenyky.

“I have to say, I was impressed by how good the food was,” said Lindsey Johnson, a native of Florida who has been teaching English in Seoul for two years. “You have to try these sausages from the German booth.”

Local communities of residents from 13 different countries were selling some of their signature dishes that were cooked using Korean produce and ingredients. Counting sausages alone, there were Polish, German and Romanian varieties being cooked at the stalls last Saturday.

“These are kielbasa,” said Bartosz Kaczmarczyk, a chef from Poland, as he turned the sausages on the grill. “I have a business in Yongin and we cater a variety of meat and deli products made with ingredients in Korea but with traditional recipes from Europe.”

Just a few stalls down from his, two ladies from Romania were selling freshly grilled Mici (also called Mititei).

The German booth was offering craft beer in addition to its sausages and sauerkraut, although more people flocked to the booth offering steaming cups of Gluhwein, a type of hot spiced wine that is also commonly found across Christmas markets in Germany and Austria.

“We expected around 10,000 people to come to the market, but I have to say this year’s market was by far the most crowded,” said an official of the Seongbuk District Office, which helped organize the event with the Seoul Global Center. “It’s become an annual festivity for the neighborhood.” 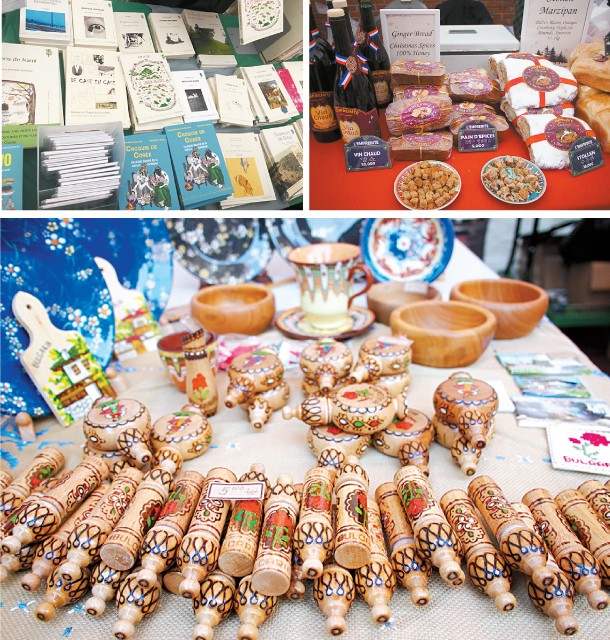 Books, baked goods and other products at Christmas markets in Seoul. [ESTHER CHUNG]

Where is this from?

Although the number of booths and countries that participate varies by year, the Czech Republic, Bulgaria, France, Germany, Poland, Romania, Slovakia, Spain and Ukraine have been present for the past three years.

Desserts from these countries could be tasted in one-go at the market as well.

The Slovakian stall offered freshly baked Trdlo (also called Trdelnik), a log-shaped cake, straight out of an oven. The chimney cake was sprinkled with cinnamon sugar on the outside and one could ask for it to be coated with Nutella on the inside.

“My favorites were the sausages from the Polish station and the mulled wine from the Russian station,” said Lakmi Kulathunga, a Sri Lankan living in Seoul. “Christmas is not the most widely celebrated holiday in Sri Lanka, so to be able to see how it is celebrated in a different country is really nice.”

For those looking to return next year, the organizing committee recommends bringing your own Tupperware as it lends to discounts. Most of the food sold out around 4 p.m., so making it to the market earlier on would provide more options, unless the Christmas lights and decorations that come alive in the evening are what you are really looking for. 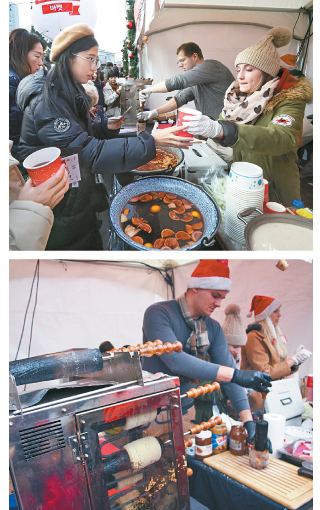 Held in southern Seoul on the same day was a Christmas market organized by the Association democratique des Francais de l’etranger (ADFE) and Seoul Accueil.

“It’s good bread,” said Justine Smith, a French citizen who has been living in Seoul for a year and a half, as she paid for a few rolls of pain de campagne at the stall run by Guillaume, a French bakery based in Gangnam District, southern Seoul. “We have markets like these in France at this time year-round. I think having it here is a good way to promote local produce.”

All of the baked goods at the stall including Saint Sacristain (twisted pastry) chausson aux pommes (apple pie), croissants, baguettes and varieties of pain de campagne were baked with organic flour from France, according to the bakery.

Benoit Houtin, a pastry chef at L’Empreinte, a French bistro based in Mapo District, western Seoul, was one of them.

“Today we’re offering lamb stew and escargots in cream sauce cooked by our chef, Gregory Defraize, and stollen, pain d’epices and macarons that I’ve baked” said Houtin, a Korean adoptee who grew up in the western part of France and trained as a patissier in the country.

“It’s not our first year taking part in the market, and we’ve noticed the enthusiasm that Korean people have for good cheese from Europe,” said Jeong Eun-jeong, an employee in the marketing department of Gourmet F&B, a catering company based in Gangnam. “The prices for the cheese products offered here are much lower than their usual market price.”

Also offered at the market were French translations of novels and popular biographies in Korea including Park Wan-suh’s “Who Ate up All the Shinga? [Hors les murs]” (2009) and Kim Da-eun’s “The Forbidden Garden [Le jardin interdit]” (2013).

Is it too Korean?

Although they tend to be more food-focused than an average Christmas market found in parts of Europe at this time of year - there was just one or two stalls at each market offering some Christmas ornaments and decorations - that’s not a bad thing, according to some frequent visitors of the market.

The square was also very crowded throughout the day on Saturday.

“Each year the problem of size of the market space is raised,” said Jacco Zwetloot, who has been coming to the market since 2014. “I understand that Seongbuk-gu is very keen to have the market stay in its jurisdiction, but with the numbers of visitors estimated at 20,000 this year, the difficult question must be asked - should the market be moved to a bigger place?”

The stage at the market was used throughout the day by musicians and artists to play Christmas carols and for auctions for certain special products.

But the appearance of local district mayors giving booming speeches in Korean on stage at the market near the end of the day made this reporter wonder if she was at a Christmas market or a political campaign.

Each of the events seemed to be international enough for some Korean visitors visiting the market for the first time.

“We’re thinking of starting a YouTube channel that introduces festivals and events in Korea that might be of interest to the international crowd,” said Kim Tae-hyun, who was filming at the market with his friend, Lee Hyung-joon, both of them students at Korea University High School in the area. “There are so many throughout the country that I think foreigners would find interesting.”