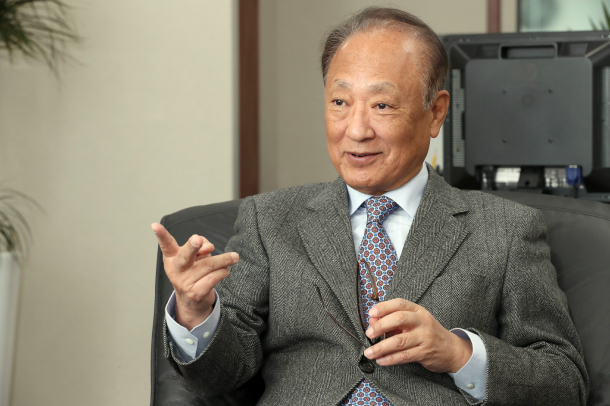 But when the JoongAng Ilbo spoke to Kim at his office in Yeouido, western Seoul, on Nov. 2, he was an “adviser” to Korea Investment Holdings. For the interview, Kim drove all the way to Seoul early in the morning from Dangjin, South Chungcheong, where he settled down two years ago after building his own farm house.

The interview, which started on education policy, soon expanded to recent issues such as derivative-linked funds (DLF) and the movie “Black Money.” Below are edited excerpts.

Q. Hana High School, which was established in 2010, marks its 10th anniversary next year. It has undeniably become one of the best schools in Korea despite going through some rough patches.

It is crucial to contemplate on how to raise our children. However, the government’s entire education policy is fixated on college admissions. There is no other country in the world where education policy shifts in less than a week due to the words of the president.

Hana High School was the school that pledged to “restore public education,” but the government announced its plan to abolish all autonomous private high schools to consolidate the “ranking” of high schools.

It’s essential to think about equality and justice. Hana High School admits 20 percent of new students through a social integration policy. One of our students who grew up in a nursery home got into one of the most prestigious universities in Korea. This is our responsibility.
Also, can abolishment of autonomous and foreign language high schools really get public education back on track? When there is a side effect, we should try to find it and fix it, not get rid of the whole thing.

My granddaughter is a bright kid, and her dream was studying at Hana High School. [The serious look on Kim’s face slightly lets up when his “only granddaughter,” who is in her third year of middle school, is mentioned.] But she decided not to apply to the school to avoid any trouble that might arise in the future, especially at a time like this.

[Before entering a public high school, Kim’s granddaughter’s family had planned to move to another neighborhood, but she gave up on that plan because of the price hike in the housing market. When asked about the location, Kim said it was Daechi-dong, Korea’s cram school central.]

Early admissions were put in place to cool down overheated private education, but many different types of admissions were established to the point that parents and students couldn’t understand what was what anymore.

College admissions is one of the areas that the government should slowly move away from. The government’s role is to punish those who go against equality, not to stick its nose and micromanage.

[His philosophy, which emphasizes the government’s broad perspective in education policy, naturally extended to the finance sector.]

KEB Hana Bank went into a rough-and-tumble after the DLF crisis.

Well, I don’t really want to talk about that … Investment products like DLF and DLS [derivative-linked securities] are all ludicrous. Risk management [teams] are failing to filter out such products and selling them with no questions asked just because clients signed paperwork … If they are professionals, they need to know they have a problem here.

Hana Bank showed strength in private banking from a long time ago.

That is one of [the bank’s] greatest strengths, so a product that promises 4 percent profits but risks a 100 percent loss should not exist. [The bank] should filter out such a product even if a client says yes. This [attitude] should become the organizational culture [of KEB Hana Bank.] Shinhan and Kookmin bank didn’t sell such a product.

[After pointing out the organizational culture issue, which sounded almost like a lamentation, he raised his voice over the general policies of financial authorities.]

To go back [to the issue of the DLF crisis,] the incidents shouldn’t really restrict banks from selling products just because of their mistakes. Derivative products are developed together by banks and foreign investment banks.

If restrictions kick in, networks with foreign investment banks will vanish as the Korean market will disappear.

There is no doubt about the necessity of restrictions concerning the DLF crisis, but [restrictions] all across the board are wrong.

The recent movie “Black Money” deals with an incident where a bank worth 70 trillion won ($58.6 billion) was sold for 1.7 trillion won. (“Black Money” is based on the true story of U.S. private equity fund Lone Star’s buying and selling of Korea Exchange Bank, or KEB.)

The movie is based on an assumption that the so-called “black-haired foreigner” [or Koreans with other nationalities] made an investment, but it doesn’t make sense.

Lone Star Funds filed investor state dispute arbitration claims against the Korean government for losses related to its investment in Korea Exchange Bank. The result is expected to come out next year. In the meantime, Hana Financial Group obtained a complete dismissal of the $1.4-billion claims in an International Criminal Court (ICC) arbitration in Singapore filed by Lone Star.

[Hana Financial Group’s] win in the ICC lawsuit wasn’t mentioned in the movie.

I was at the trial in Singapore which was held for 10 days. Lone Star secretly recorded the phone call it had with me. [In the phone call,] Lone Star asked, “Are you trying to lower the sales price by government order?” I replied, “No. There is no government. It’s just you and me.”

Thanks to this [phone call,] we won the arbitration.

Private equity funds don’t reveal the identity of shareholders, but [in the movie] U.S. congressmen and senators pressured the Korean Embassy to the United States during the negotiations.

When asked why, [the congressmen and senators] answered that college funds and pension funds of priests and firefighters were involved as Lone Star’s shareholders. [Those pension funds are not] black-haired foreigners. There were specific shareholders.