Jumbos’ Yoo proves he’s still got what it takes

Jumbos’ Yoo proves he’s still got what it takes 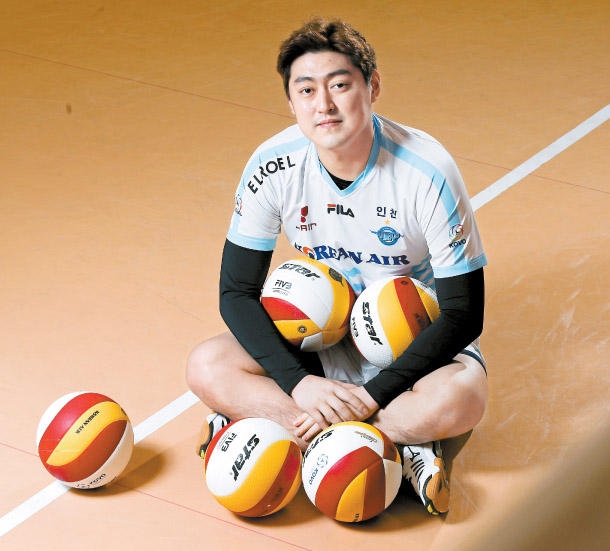 Losing a starting setter could impact a team significantly, but thanks to Yoo Kwang-woo, the Incheon Korean Air Jumbos are holding on to the top spot in the Korea Volleyball Federation (KOVO) 2019-20 regular season standing.

Last month, the Jumbos lost setter Han Sun-soo after he injured his finger. The Jumbos were able to stay out of trouble as Yoo immediately stepped into Han’s shoes. With Yoo’s performance, the Jumbos are leading the league with 11 wins and four losses, totaling 30 points as of Friday, 7 p.m.

“We would have been in so much trouble without Yoo Kwang-woo,” said the Jumbos head coach Park Ki-won. “I had a lot of concerns for next January because Han Sun-soo was going to join the national team for the Olympic qualifier. Also, since Han Sun-soo is old, we needed a backup player. But I didn’t think that Kwang-woo would play this much.”

Despite Park’s compliments, Yoo credited teammates, saying his performance only looks so good because his teammates are playing well.

“Since the Korean Air players are all really good, they fulfilled my weaknesses,” said Yoo. “They receive well, and when I set difficult balls, they hit them well. I’m just a freeloader.”

Back when Yoo played for Inha University, he was the No. 1 setter leading his school to sweep all the titles. He turned pro in 2007, joining the Daejeon Samsung Fire & Marine Insurance Bluefangs. Right when he joined, the Bluefangs were at the peak of the club’s history as they won the V-League championship title for seven straight seasons from 2007 to 2013. Of the seven, Yoo played in six seasons and won the V-League’s setter award for three straight seasons from 2011 to 2014.

However, Yoo wasn’t able to continue his strong form for long due to an ankle injury. In 2017, he was traded to the Seoul Wooricard Wibee. While he fulfilled his role as a veteran setter with the Wibee in the first season, things started to change in his second season, as No Jae-wook joined the club.

Due to this, Yoo lost playing time significantly. Right when Yoo was thinking about retirement, the Jumbos reached out to him for a last chance, as the Jumbos were in need of a backup setter.

“Since they were a really good team, I was overwhelmed at first,” Yoo said. “But I was happy that I could continue volleyball.”

By joining the Jumbos, he got to be on the same team as Han, who used to be his rival back when they were amateurs.

“I only tried to think about winning,” Yoo said. “Korean Air plays [fast] volleyball. So I try my best to adjust to that. Once we win, I’ll forget about all the tough times. I haven’t won for a while, but this year is a chance. I don’t want to miss out.”

A win this time around will also be a good redemption for the Jumbos, as they finished runner-up in the championship last season. The Jumbos’ last championship victory was during the 2017-18 season.

When Yoo first joined KOVO, he underwent ankle surgery. But due to a complication, he is still feeling the aftereffects. For more than 10 years, he’s been going through treatment and rehabilitation. At times, he had to get injections.

“On days when he gets his painkiller injected, he can’t eat anything,” Park said. “But he gets through it. I tear up sometimes.”

To get through the season, he had been getting injections regularly.

“I get nerve injections once or twice a month,” Yoo said. “It takes about three hours. It’s very painful. It is more painful than playing the sport. But since I can only continue playing by getting this, I get through it by telling myself that this will also pass by.”

Despite all the pain, Yoo isn’t ready to leave the court. He got married in 2014 and has a son and a daughter. As they are still young, he is hoping to play until they are old enough to realize that their father is a professional volleyball player.

“My 4-year-old son visits the court sometimes, and after the match, he likes to give me a high five on the court,” Yoo said. “He also asks me when my next match is. It may sound greedy, but I want to play more, until my 2-year-old daughter knows that her father is a volleyball player.”

The Jumbos will continue their season with a match against the Bluefangs on Sunday at Gyeyang Gymnasium in Incheon, starting at 2 p.m.