Kia Tigers pitcher Yoon Suk-min, once a giant of Korean baseball and a former major league hopeful, announced his retirement on Friday. 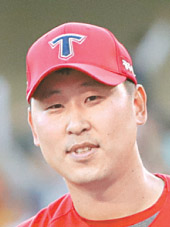 “I tried to get back on the mound, but I’m at a point where it’s hard to throw regular pitches,” Yoon said. “Rather than filling up a roster spot while I rehabilitate, I decided to retire so the younger players can earn their chances.”

Yoon joined the KBO in 2005, after getting drafted as the Tigers’ first pick in the second round of the 2005 KBO draft. In his rookie season, he picked up three wins, four losses and seven saves with a 4.29 ERA throughout 53 games. Then in his second season, Yoon played as a middle reliever and closer for the Tigers for an impressive 2.28 ERA throughout 63 games, picking up five wins, six losses and 19 saves.

Yoon reached the peak of his career in 2011, where he picked up 17 wins, five losses and one save with a 2.45 ERA. That season, Yoon won four individual titles - the most wins and strikeouts, lowest ERA and best winning percentage. He is only the second pitcher in the KBO, after former Tigers pitcher Sun Dong-yol, to sweep four titles in a single season.

Looking at his performance with the national team, he helped Korea win gold at the 2008 Beijing Olympics, finish second at the 2009 World Baseball Classic and pick up another gold at the 2010 Asian Games.

Once he became a free agent after the 2013 season, Yoon made an attempt to play in the majors and signed with the Baltimore Orioles. He wasn’t able to break through and instead spent the season with Triple-A affiliate Norfolk Tides. Throughout 23 games, Yoon picked up four wins and eight losses with a 5.74 ERA.

As Yoon was not invited to the Orioles’ spring training the following year, he returned to the KBO by signing a four-year contract with the Tigers at 9 billion won ($7.7 million). In his first year back, Yoon lived up to the high paycheck as a closer, picking up two wins, six losses and 30 saves with a 2.96 ERA throughout 51 games.

“Throughout my career, I’ve received so much love from the fans,” Yoon said. “I just feel sorry for not being able to live up to the love. I’ll remember the fans’ love forever. I’m also thankful to the manager, coaches and the club’s staff for giving me the opportunities and supporting me.”