A nomination committee at Shinhan Financial Group reappointed Cho Yong-byoung as the sole candidate for the chairmanship position of the major financial holdings unit on Friday, defying the financial authorities’ warning over the legal risks involving the current chairman.

The group said that the committee of seven outside directors unanimously voted for Cho to head the group for the next three years in a third term, citing prudent business decisions including mergers and acquisitions. 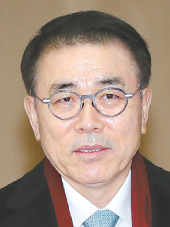 “Cho is credited with spearheading the growth of Shinhan Financial Group through acquisitions of Orange Life Insurance and Asia Trust,” it said.

But outside of the group, worries about Cho continue.

The regulator said last week that it met with two executives at the group to deliver concerns related to Cho seeking a third term. Cho is currently on trial over allegations of unfair hiring.

The current trial by the Seoul Eastern District Court is scheduled to end in mid-December, and the ruling could be released next month. Shinhan Financial Group initiated the nomination process last month ahead of the end of Cho’s term in March.

Cho entered Shinhan Bank in 1984 and went on to head the bank’s New York branch and was named vice president of the retail banking sector. He then held the top post at Shinhan affiliates such as Shinhan Bank and Shinhan BNP Paribas Asset Management.

The reappointment decision will be finalized during a shareholders’ meeting set for March.