Raising a toast to the growth of farmers’ income

Raising a toast to the growth of farmers’ income 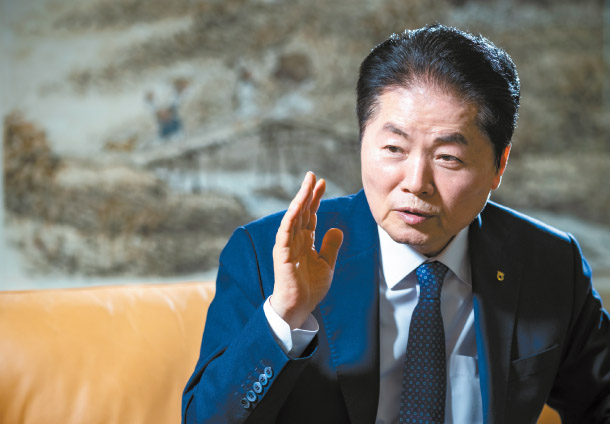 Kim Byeong-won, chairman of National Agricultural Cooperative Federation, says that farming households’ income should be increased in order to secure the future of the agriculture industry during a recent interview with the JoongAng Sunday. [PARK JONG-KEUN]

Kim Byeong-won, chairman of the National Agricultural Cooperative Federation (NACF), commonly known as Nonghyup, used his tough upbringing in a poor farming family as the drive to devote himself to the development of the agriculture industry.

“[I chose to go to agricultural high school] because my family couldn’t afford my university tuition. At the time, agricultural high school graduates had lots of options for careers including public officials, Nonghyup employees and teachers,” Kim said. “Although I passed the national exam for a position of a fifth-level public official and court official, I decided to work at Nonghyup in order to stay close to my parents as I am their only son.”

After gaining his Ph.D. degree in agricultural economics in Chonnam National University in Gwangju, Kim worked as a union representative of Nampyeong Nonghyup in South Jeolla. In 2016, he became chairman of Nonghyup.

The JoongAng Sunday recently sat down with Kim to talk about his devotion to the agriculture industry.

Q. In the past, Nonghyup received lots of criticism from the public that rather than being for the people, it tried to reign over them. What do you think about this?

A. At the time, Nonghyup had limitations, contrary to its fundamental purpose, as it was a government-driven organization. The circumstances for it to be financially independent were poor. However, Nonghyup still provided fertilizer, pesticides, and farming funds to farmers, which is one of its critical roles. Also, it solved the problem of farmers’ debt caused by high interest at the time. No one can deny this.

During your term as chairman of Nonghyup, you published books every year. A theme that encompasses your four books is “change.” Is there a reason behind this?

When I first became an employee of a Nonghyup branch, I realized that it was only working within frames that the government has constructed rather than coming up with new business models. Nonghyup was only doing tasks such as providing agricultural fertilizer and pesticides that were supported by the government. I started to think about “change” since then.

Wasn’t it difficult to push for change as an employee of a regional Nonghyup?

An employee can only be a manager after working for at least 15 years. However, you could become a director in less than nine years if you passed a promotion exam. To prepare for the exam, I stayed at the library and studied all night long. As a result, I got promoted to director in three years. As there was no other position between director and union representative at the time, so I had the power to push for change.

What was the first change you pushed for?

Your first try was quite a big success. What other changes did you push for?

When I served as a representative of Nampyeong Nonghyup in South Jeolla in 1999, I built a 300-pyeong (10,675-square-foot) farmer’s market in Yangpyeong Nonghyup, Gyeonggi. I allowed farmers to set their products’ prices themselves instead of paying fees to distributors. This system enabled farmers to produce a variety of products in small quantities and achieve a significant increase in profitability. A total of 20 Nonghyup branches across the country have farmer’s markets now. It also contributed to spreading the concept of environmentally-friendly agricultural products.

You established the NACF Academy of Cooperative in Goyang, Gyeonggi, as soon as you became the chairman. Can you explain more about this?

I built the academy to educate employees about the identity and principle of cooperative federation. A concentrated demand should be made in order for farmers to have competitive power. In that way, farmers could buy necessities such as agricultural machines, fertilizers, and pesticides at inexpensive prices. Nonghyup aims to concentrate each farmer’s demand so that it can supply products cheaply. The same goes for financial businesses as well. They receive deposits from farmers with reasonable levels of interest rate and supply those to people who are in need at reduced costs. I wanted employees to take this kind of spirit to their hearts. Farmers are Nonghyup’s only reason for existing.

What do you think the most important task is for the future of farmers?

First of all, farming households’ income should be increased. We should help farmers when they have difficulty with harvesting their products. Also, we should help them sell their products to customers at reasonable prices. The reason why Nonghyup received lots of criticism in the past was because we were so oblivious to this most important task and only focused on making profit. Since Nonghyup is not a corporation that aims to maximize profit, we should be satisfied with the least profits necessary for federation management and must invest those profits somewhere that can boost farming households’ income.

Do you think today’s Nonghyup is different than in the past?

Education had great effects. I made a training course at the NACF academy mandatory in order for employees to get promoted. During my term of office, I opened 19 conferences that ran for two days without sleep to make employees stay up all night thinking only about farmers. I guess around 70 percent of all employees now fully understand the reason why Nonghyup exists. For instance, when I offered a toast in the past, employees shouted slogans such as “Cheers to the development of Nonghyup!” However, now, they say “Cheers to the growth in farmers’ income!” Some employees say “Cheers to 50 million won [$42,000] of farming households’ income!” when they take selfies with their colleagues.

You mentioned specific figures regarding farmers’ incomes during your inauguration ceremony. Can you explain more about this?

What do your employees say about that goal?

They are a lot more assertive than me. We made a deposit system that offered a 5 percent interest rate and it was from employees’ ideas. Also, we installed solar panels on 400-pyeong (14,233 square feet) of land that only provided 2.5 million won worth of profits a year with the sale of chili crops. The average annual profit of the land increased dramatically and reached about 12 million won. The installation of solar panels also came from employees’ ideas.

They could not have come up with these kinds of ideas if we didn’t have a goal set to reach 50 million won of farming household income.

Is it true that you set the goal based on the Everest base camp trek theory which shows that more hikers reached the top of Everest when its base camp was changed to an altitude of 6,000 meters (19,685 feet) instead of 2,000 meters?

Yes. I set my base camp at 50 million won. We tried to give hope to farmers that they could always dream of 50 million won of income.

Did employees’ consciousness change as well?

When a fire broke out in Goseong, Gangwon, last April, employees opened the academy campus to victims and prepaid them 50 percent of their insurance money. Korea was hit with three typhoons this year, and our employees stepped in to help victims every time. The employees know how to take proper measures now. In the past, they would’ve gone to help people in the morning and returned in two hours after just taking some photos.

What other achievements can you tell us about?

We care a lot about social welfare as well. About 800,000 seniors, who are aged 70 or above, are living alone across the country. We built a call center for them. About 20 employees currently work at the center and listen to 110,000 seniors’ stories. Our employees call the elderly every day to provide assistance with their daily chores and also become good companions for them. When seniors ask for help with broken furniture, we try to provide aid of 1 million won. I plan to hire 10 more employees for the center so that it can answer up to 300,000 seniors’ calls.

Youth are very important to the future of agriculture. Do you have any plans related to the younger generation?

We definitely have some plans for youths. A school for young farmers will be newly opened on Dec. 16 in Anseong, Gyeonggi. The students will be provided with education on the future of agriculture using big data and artificial intelligence. We spent about 60 billion won to build the school. We plan to produce at least 500 graduates every year so that more youths can be good farmers in the future.

You only have a few months until retirement. Do you have any last-minute plans?

Nonghyup operates only within the government’s agricultural policies. However, its flexibility is such a problematic issue. Since the Nonghyup chairman does not have authority to control it, I will continuously try to look for ways that I can contribute to making better agricultural polices with my 40 years of experience.