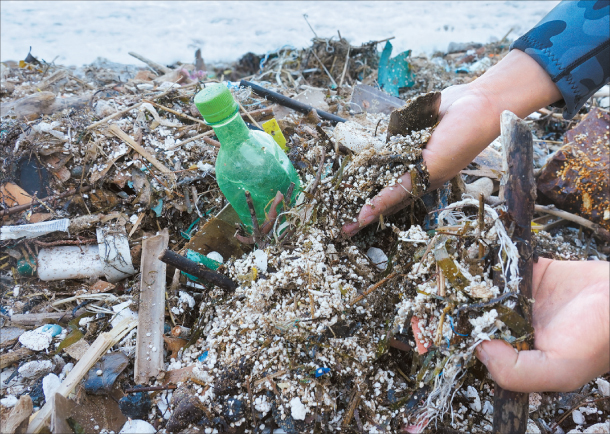 A beach on Geomun Island off Korea’s southern coast is covered with plastic waste. [CHON KWON-PIL]

GEOMUN ISLAND, South Jeolla - About 10 meters (33 feet) below the surface of the sea near this remote island off Korea’s southern coast, a coral reef of vibrant hues came into sight. A school of fish floated by.

But it didn’t take long for a reporter from the JoongAng Ilbo diving last October to spy something much less picturesque: plastic waste - a whole lot of it.

The reporter could see wet wipes, fishing lines and lead sinkers that were presumably used - and neglectfully discarded - by recreational fishermen enjoying their leisure time nearby.

Sosambu Island, just next to Geomun Island, looked no better.

National parks are managed by the Korean government, and they’re intended to be representations of the natural ecosystem of the country. 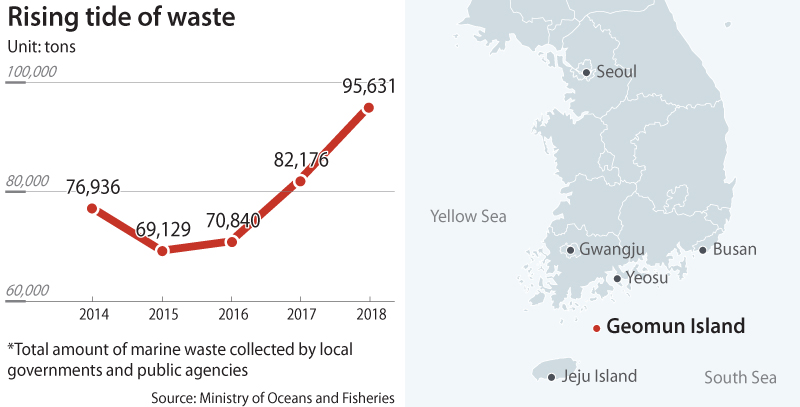 But when the reporter visited Geomun Island on Oct. 20 after taking a two-hour boat ride from Yeosu, South Jeolla, with some 10 members of a civic environmental group, the island seemed less a symbol of Korea’s natural beauty than a portrait of nature ruined.

The group, whose name roughly translates as the Organization of Citizens Protecting National Parks, was fully equipped with scuba diving gear, ready to collect trash from the sea and document the island’s marine pollution.

When the reporter and the group finally arrived at a spot near the island, many people could be seen fishing on rocks near the shoreline, surrounded by buoys signaling their boundaries.

After a member of the group briefed everyone on some guidelines, they and the reporter set off with fishing nets to collect trash.

When everyone returned to the boat, they emptied their nets to create a large stack of plastic bottles and waste. A lot of the trash, at first glance, appeared to be from fishermen.

“I was really shocked to see wet wipes scattered all over the place,” said Kim Yun-seon, a member of the group.

“I’m all up for ocean protection, but actually diving into the sea and seeing this much plastic trash was a lot worse than I expected.”

According to data from the Korea National Park Service, there are 2,144 fishing grounds and fish farms across the Dadohaehaesang, Taeanhaean and Hallyeohaesang national parks, which amount to 29,000 hectares (71,660 acres) in total, or the size of 41,600 football fields put together.

Rules for fishing in these areas, however, barely exist, exposing the marine national parks to environmental pollution.

Korea’s national park law stipulates that fishermen must receive approval from the management office of a national park for when they wish to catch marine animals.

But the same law also says that fishermen don’t need to report to the office about their planned leisure activities in advance if their actions won’t harm the natural environment or cause inconvenience to other people.

That means people can easily get away with throwing trash into the sea, like on Geomun Island.

According to a study by the Ministry of Oceans and Fisheries, nearly 828 tons of waste wash up on islands across Korea every month, two-thirds of which is on the southern and western coastlines.

When fishermen throw trash into the sea, it washes ashore, polluting nearby islands like Geomun.

When the JoongAng Ilbo visited a beach on the island, it was littered with plastic waste, some with Chinese labels.

Jeong In-cheol, general secretary of the environmental group, claimed that plastic waste from China, Korea and Japan all seemed to be tangling up in the South Sea and washing up on Geomun Island.

“We collect plastic trash from the shoreline almost every single day, yet the next day, we arrive to find loads more,” Jeong lamented.