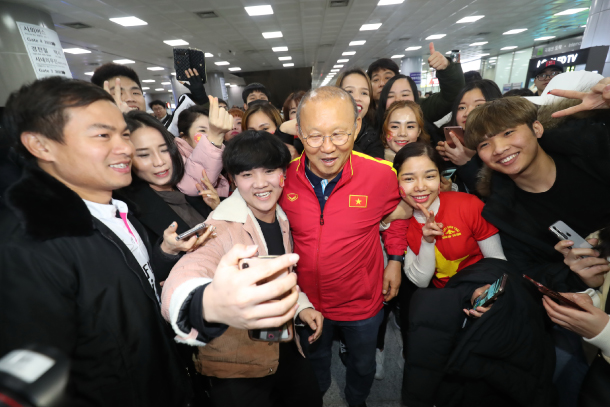 Park Hang-seo, center, head coach of Vietnam’s national and U-23 football teams, is surrounded by fans at the arrival hall of Gimhae International Airport in Busan on Saturday. Last week, Park led the U-22 team to win gold in the Southeast Asian Games by defeating Indonesia 3-0. [SONG BONG-EUN]

SANCHEONG COUNTY, South Gyeongsang — For some tourists from Vietnam, the biggest attraction in Korea these days is not a palace, art museum or anything related to K-pop.

It’s a football field in this modest county in South Gyeongsang.

From here did spring the Park Hang-seo, head coach of Vietnam’s national and U-23 football teams. Last week, Park led the U-22 team to win gold at the Southeast Asian Games by defeating Indonesia 3-0. His winning efforts for Vietnam have prompted hundreds of Vietnamese tourists to make pilgrimages to the place in which he was born, which is 157 miles southeast of the Korean capital.

Park was born in Sancheong County in 1959. He entered the K League as an athlete for Lucky-Goldstar FC in 1984 and retired four years later. Immediately after retirement, he began coaching teams in the league, but received little attention. That changed in October 2017, when he was hired as the head coach of Vietnam’s national football team and U-23 national football team.

Tourists from Vietnam have been traveling over 3,200 kilometers (1,988 miles) to get to Sancheong, and the Sancheong County Office has seized every opportunity to make sure the flow doesn’t ebb.

County officials say hundreds of Vietnamese tourists have descended on the county since last April after Vietnam reached the quarter-finals in the 2019 AFC Asian Cup, which lasted from January to February.

The tourists, who mostly come in groups, visit the schools Park graduated from and the football field he used to play on. Apart from tracing Park’s life journey, they also visit the Namsa Yedam Hanok Village, famous for its narrow lanes of traditional Korean homes, and Donguibogam Village, where visitors can enjoy Korean medicinal food.

The Sancheong County Office has also organized welcoming events for the Vietnamese, offering them souvenirs and locally produced products.

After naming Park an honorary ambassador for the county last February, the office has been designing new tour packages for Vietnamese, and recently rolled out plans to create a so-called Vietnam Friendly Village around Park’s neighborhood in Sancheong.

Sancheong officials said they were currently reviewing plans to create a football-themed exhibition hall and coffee shop near Park’s boyhood home, as well as a “Vietnam Road” with restaurants serving Vietnamese food. A mural that celebrates Vietnam’s famous tourist attractions and scenes of Park playing football when he was young is also under negotiation.

The Vietnam Friendly Village is expected to cost nearly 4 billion won ($3.4 million), and once the country finalizes a budget, it hopes to finish constructions by 2021.

“I think the Sancheong County Office has come to create brotherly ties with Vietnam through coach Park,” an official at the office said recently. “We created new tour programs catered to Vietnamese tourists, and invited Vietnamese airline officials and tour agencies to the county to introduce what we have to offer. Once the Vietnam Friendly Village gets built, I hope more Vietnamese will visit Sancheong.”