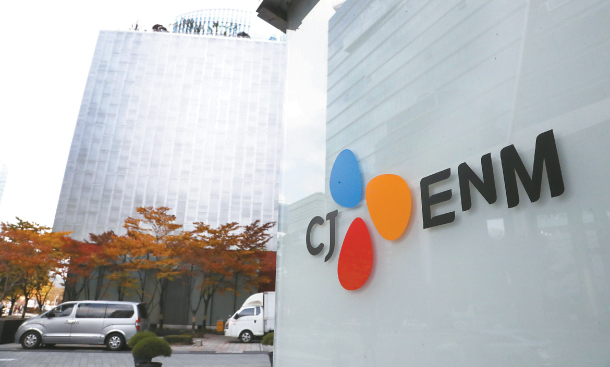 CJ ENM, Korea’s largest entertainment conglomerate, has been called the “victim” of the vote-rigging scandal behind the now-disgraced “Produce” series according to the written prosecution submitted by the prosecutors to the National Assembly on Dec. 3. [YONHAP]

[First in a two-part series]

Producers Kim Yong-bum and Ahn Joon-young of “Produce X 101” of Mnet were indicted with detention on Dec. 3, after being arrested by police for rigging voting results of the popular K-pop audition series. When the show kicked off in 2016 with “Produce 101,” it promised viewers a K-pop group “produced from your very own hands,” but it turns out that the producers had not only taken bribes from entertainment agencies, but fabricated voting results in the process of forming all four of the show’s final project groups - I.O.I, Wanna One, IZ*ONE and X1. No court ruling has come yet, but the fact that “Produce 101” wasn’t what it promised is clear.

From the trust of the public to the dreams of individual trainees, the Korea JoongAng Daily looks at what CJ ENM’s Mnet has lost through the “Produce” scandal in a two-part series.

Every summer since 2016, subway stations and buses have been taken over by ads paid for by fans promoting their favorite trainees competing on cable channel Mnet’s hit “Produce 101” audition series. This year was no different, with ads covering the walls of major subway stations across Seoul filled with sticky notes from the trainees’ most devoted fans wishing their favorites good luck in becoming a member of the final project band.

Yet, it turns out that it wasn’t the fans that produced the group - it was in fact Mnet, or to be more precise, the show’s producers, who allegedly predetermined the show’s final 11 members for all four seasons, while convincing the show’s fans into thinking that the fate of their favorite contestants was in their hands.

The betrayal felt by fans and the rest of the public are on completely different terms. While the latter may regard the news as shedding a light onto the dark side of an entertainment industry filled with corruption and bribery, for devoted fans of the show and the groups it created, a line has been crossed, and Mnet has a long road ahead to gain back their trust.

After fans figured out the mathematically improbable pattern that appeared in the total vote tallies of the final members of X1, the latest season’s final project group, suspicions that something had not been right since “Produce 48” turned into fans taking the matter into their hands. They formed their own “Truth Investigation Committee” after the fourth season ended in July, and fans of the other seasons followed suit.

“Fans just want the truth,” said lawyer Kim Tae-hwan, a legal attorney of Mast Law & Consulting representing the Produce series’ Truth Investigation Committees from season 2 to 4 and “Idol School” (2017). “[If their votes did not matter,] then who decided the groups’ members? That’s what the Truth Committees have wanted from the very start when they came to us with this vote-rigging scandal. Maybe punishment [of those held responsible] would follow next, but it was never the fans’ original purpose.”

“Rigging the votes is a big slap in the face to everyone who participated, and is equivalent to saying ‘We don’t need your opinions, we need you to increase our ratings,’” said a Korean Wanna One fan who voted during every round of the second season of the show, but wished to remain anonymous. “I made it a routine to vote at midnight [when the daily vote limit was reset] in case I got too swept up in my daily schedule and forgot during the day. I often asked friends and colleagues to take part in the vote as well.”

Local fans of the “Produce” series often borrowed IDs from their friends and families to vote for their favorite trainees that they hoped would be able to debut with the final group through their votes. Although the votes cost only 100 won ($0.08) a piece, fans usually compensated their acquaintances with “gifticons” for letting them borrow IDs.

Yeon Da-hyeon, a devoted local fan of season one contestant Chungha, started to vote for her in the middle of the season and also asked her friends to vote for her in the final episode. She said that she wasn’t “too heartbroken” about the fabricated results as her pick eventually did debut, but nevertheless was “disgusted seeing producers feasting over young trainees’ blood, sweat and tears.”

“I hope the trainees who originally won can get compensated somehow,” she said.

The two local fans contended that they probably won’t be voting for audition programs anymore, having lost faith and credibility because of the scandal.

The global impact of the show was also felt after news of the scandal. The official Instagram accounts of the third and fourth series were flooded with comments from ardent fans wanting the groups - IZ*ONE and X1 - to come back despite the scandal, saying that “they love and support the groups no matter what.”

But there were some strong objections over the continuance of the groups as well.

“They should disband. It’s not because of hate, it’s because it’s improper,” said Jamie Fox Rosa from the Philippines, a former fan of IZ*ONE. “The members were all chosen nearly and purely from the favors given by the agencies. Their ranks were practically bought, [not earned] and they will [always] be remembered that way.”

Those who wished that they continued seeing the bands also blamed Mnet and producers.

“I really want to ask Mnet, what have our kids done wrong?” said Khin Thu Zar Win, an ardent fan of X1 from Myanmar. “We are going to protect our kids at all costs. The fabricated vote results are all because of Mnet and that producer. Our innocent babies didn’t do anything wrong.”

To discover the truth, what the fans really want is to see the raw data - the original voting results that the channel received from the voters.

The legal representatives of the committees have been attempting to get their hands on the information, but it hasn’t been easy.

“We did request for information disclosure on the day of the producers’ indictment,” Kim told the press. “But the prosecutor told us that they were ‘unsure’ of disclosing the information before the court ruling comes out.”

Kim says they will again ask for the information after the court decision, but his spirits have been dampened because they have also been blocked from viewing the written prosecution.

Kim says that he is frustrated by the all the secrecy that should have been out long ago.

“The citizens, the fans have the right to know what happened and which trainees’ selections were fabricated,” said Kim. “But instead, they are only known by the judicial insiders. Releasing the data won’t really affect the defendants’ court ruling, and the truth will eventually come out some day, so we’re really frustrated right now. We were even blocked from acquiring a copy of the written prosecution by the court, so it is unlikely that the court will let us see the raw data. But, we will still do everything we can to acquire them.”

On Dec. 3, local press reported that the Seoul Central District Prosecutors’ Office had submitted a written prosecution to the National Assembly which accuses Ahn of fraud, business obstruction, and breaching the Improper Solicitation and Graft Act, while accusing Kim of fraud and business obstruction. But CJ ENM is walking free from the vote-rigging scandal, even earning the title of “victim” from prosecutors.

Kim suspects that this has been the company’s scheme since they first requested an investigation by police at the end of July.

“Even if the rest of the company did not know that the producers were receiving bribes, they still had the raw data so they could’ve compared the information then and raised questions,” said the lawyer. “What’s really ridiculous is that the company’s apology pleads for the media to refrain from writing speculative reports about the members without releasing any information about the voting results. Without knowing which members were pre-selected by the producers or which were fairly picked by the fans, the public will continue to attack all of the members. Those who did earn their debut position should at least be protected [from public criticism] - but the company still remains silent.”

Boy group X1, left, who debuted through the fourth season of the Produce series, performing on stage during Mnet’s music program “M Countdown” before producers admitted to fabricating the votes. Right, a unique practice that arose from the program in which trainees’ fan clubs put up subway advertisements and sticky notes to support their “one-picks.” [SCREEN CAPTURES]

With public trust shattered, industry experts unanimously point out that the monopolization of CJ ENM is the biggest problem and barrier to their credibility.

At “Online Music Chart and TV Audition Program Fairness Seminar” hosted by Korea Creative Content Agency on Dec. 9, Kim Eun-koo, a reporter at local media outlet Edaily, reported that the company has been taking 25 percent of the profits made by the groups after their debut at the end of the show.

“The company should give up the profits reaped through the management of the group members and focus only on the revenues earned from the broadcast,” Kim Eun-koo told the press. “That should be the premise, because if not, it becomes a leeway for the conglomerate to realize their greed.”

“I believe that the huge success of Wanna One pressured the company to want to do well in the third and fourth seasons as well [because it directly relates to their revenue],” commented Lee Nam-kyung, an official from the Korea Management Federation. “There has been basically too much glory and attention concentrated on the Produce series when it’s merely another kind of entertainment program.”

Kim Eun-koo pointed out that there was a precedent of an audition program failing to keep the promise that they made to the viewers in fear of losing money.

“There was this audition program ‘Mixnine’ (2017) co-organized by YG Entertainment and JTBC in which the agency singled out nine members based on fan votes. But they didn’t get to debut. I presume that the company lost too much money by investing in this program, and when they didn’t reap the necessary profits, they bowed out,” Kim said.

“Since there was already a precedent set, I think the producers from the ‘Produce’ series thought, ‘since they did it, why not us?’”

One way to prevent such future disputes, Kim Eun-koo says, is to eradicate the fan-based voting system altogether from future audition programs.

“If there is a clear set of standards and judges from the start, there’s nothing controversial about that,” Kim continued. “The program producers only draw in the viewers because they want to maximize the drama of the program structure. But since it causes so many problems, why not just abandon it?”