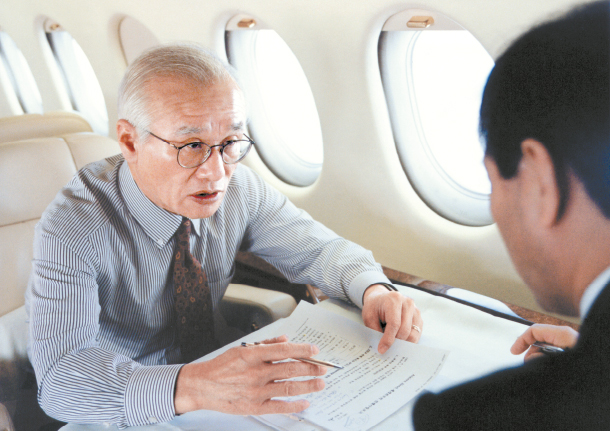 Founder and Former Chairman of now-defunct Daewoo Group Kim Woo-choong goes over a speech during a business trip overseas in an undated picture. [DAEWOO SKY INSTITUTE]

The funeral of founder and former chairman of Daewoo Group Kim Woo-choong was held at Ajou University Hospital on Dec. 10.

It was packed with high profile businessmen - including Hyundai Group Vice Chairman Euisun Chung, Shinsegae Group Vice Chairman Chung Yong-jin and Korean Air Chairman Cho Won-tae - former Finance Minister Kim Dong-yeon, and many former Daewoo employees who were executives or even newbies when Daewoo was dismantled during the economic crisis of the late 1990s.

They all reminisced about the various challenges they faced, including pioneering work in overseas markets that were untapped by Korea Inc. at the time.

They had obvious pride in their time at the company.

Kim Tae-gu, former CEO of Daewoo Motor, who is 78 years old today, remembered the 1970s when Daewoo Group was still Daewoo Industrial. Its employees were dispatched all over the world to win orders.

“In Africa [in the 1970s], Ethiopia was at war with Somalia,” Kim said. “We had a contract in Ethiopia to export Taiwanese motorcycle helmets. However, we were faced with a problem. The U.S.S.R. was backing Ethiopia so the United States was blocking exports to Ethiopia.”

He wanted to give up on the deal, but Chairman Kim Woo-choong had a different plan. 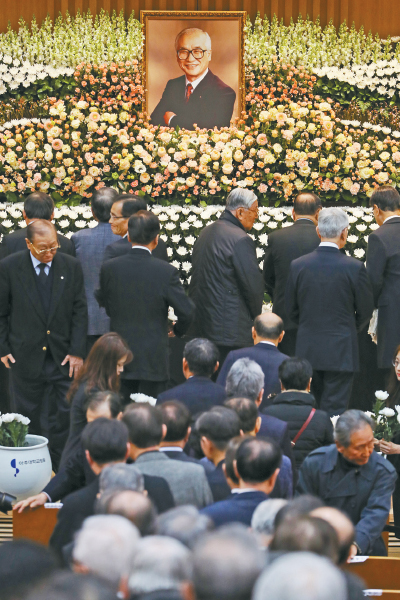 Crowd showing respect to Kim Woo-choong at his funeral at Ajou University Hospital in Suwon last week. The late chairman of Daewoo Group passed away on Monday. [YONHAP]

“He started to look for other countries that could import the helmets,” Kim said. “And he succeeded. He did something no one else could.”

He also described Daewoo Motor’s initial export of cars to Eastern European countries. That may seem like a no-brainer, but it wasn’t at the time.

“If it was easy, why didn’t other western companies do it earlier?” Kim asked.

Kim remembered the days when there was a fierce internal debate over Daewoo’s motto of “Creativity, challenge and sacrifice.”

“The executives wanted to use the word ‘originality’ over ‘creativity,’” Kim said. “But the chairman was adamant on ‘creativity.’ Chairman Kim said originality was only an idea. His argument was we needed to go beyond and create something instead of just stopping at ideas.”

Other former Daewoo employees talked about the challenges they had to overcome in the 80s and 90s.

“Once the head of the company’s branch office in Sudan, where there was a lot of political instability, was kidnapped and released,” said Kim Jong-do, 65, a former GM Daewoo executive. “But after that incident, whatever political changes took place, no one harmed Daewoo employees.

“It wasn’t because we sided with any political party or government but because Daewoo had the image of being a company that would always work for Sudan’s best interest.”

He said Daewoo went into Eastern European and African markets even before diplomatic relations were established.

“We pride ourselves that Daewoo doing businesses in those markets was the foundation for Korea starting diplomatic relations with those countries,” he said.

Baek Ki-seung, a 62-year-old former executive of Daewoo Group, said in the early 90s, the South American market was dominated by Japanese companies.

He said Daewoo made it a point to focus on after-sales service.

“Customers had to wait more than a week to have their cars fixed,” Baek said. “But we repaired them immediately. As we started to secure market share, Korean culture started to spread.

“That was how Daewoo was able to replaced Japanese products, and the culture behind them, with that of Korea.

In the 1980s, Daewoo struggled with labor conflict.

He said he was surprised at the enlightened response of the late chairman to union activities.

“[Kim said] labor activism is about self-sacrifice and challenge and the spirit of Daewoo,” Hong said. “However, [he said the union] lacks experience and sees the world narrowly.”

Instead of banning labor union activism, the chairman said, union activists should be nurtured as company talents, Hong recalled.

Hong was a direct beneficiary of that enlightened approach. After leading the union, he was sent to work in one of the company’s overseas branches.

The late chairman hired 40 former student activists in the early 1990s when other companies were denying jobs to young people with such pasts.

A 57-year-old former employee at the funeral who requested anonymity said he was able to work at Daewoo despite being arrested during his college years for participating in student activism, thanks to the late chairman.

“I was trying to get a job, but none of the other conglomerates were accepting me,” the former employee said. “After a job interview at Daewoo, the executive [in charge of hiring] grasped my hand and said, ‘Let’s work together.’”

He said that despite taking the job, the unfavorable views he had of heads of conglomerates and big companies persisted.

“But there was one incident I’ll never forget,” he said. “During a meeting between the chairman and young employees, one employee asked an impudent question. He asked, ‘Every day you work from the break of dawn to late at night. How much is enough for you to retire?’

“The chairman smiled and asked back, ‘How much would be enough for you to retire? Five billion won? I have made more than that and yet I still work. You know why? There’s fun in supplying products and services that contribute to the world and making money and paying taxes. That’s why I work.”

He said the moment he heard that comment, he realized Kim was an entrepreneur through-and-through rather than just a greedy capitalist exploiter.

The former Daewoo employees didn’t hide their disappointment with Daewoo being dismantled as a conglomerate after the Asian economic crisis of the late 1990s.

They argued that the late chairman was on the bad side of the Kim Dae-jung government because he served as the head of Korea’s leading business lobbying group, the Federation of Korean Industries (FKI), during the financial crisis.

“It was after the FKI’s meeting during the financial crisis,” Baek recalled. “The chairman told me to get in the same car with him and he said, ‘Seems like I shouldn’t have taken the FKI chairmanship. The company is being pressured.’

But some had slightly different views of the late chairman.

Although his spirit of challenge was undeniable, a court has sentenced him to eight years and six months in prison for accounting and loan fraud and slapped him with a fine of 18 trillion won.

But a former employee at the funeral said he personally didn’t hold any grudge over losing his job when the conglomerate was dismantled.

“If I did, would I have rushed to come here and talk about the old times?” said the employee, who was also a former union activist. “What we have is respect and pride.”