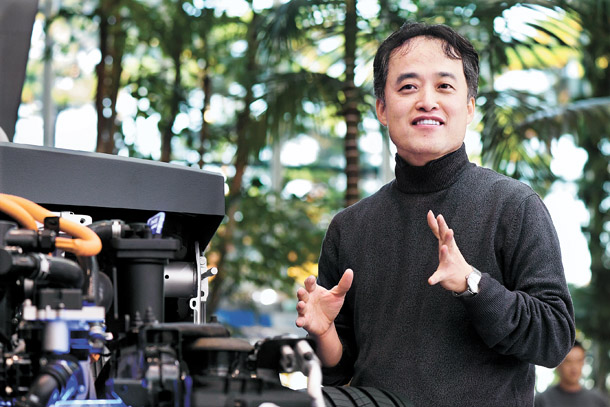 Kim Jeong-hee, head of the Artificial Intelligence Research Lab at Hyundai Motor Group, speaks to the JoongAng Ilbo on Nov. 20. He says that the primary objective of Hyundai Motor Group’s artificial intelligence research is gaining competency in both hardware and software, just like Apple. [HYUNDAI MOTOR GROUP]

One important pillar of Hyundai Motor Group’s push to transform into a mobility company is its artificial intelligence (AI) technology.

Jump forward one full year, and the public has yet to hear what Kim and his researchers have done at the Air Lab. In an exclusive interview with Kim, his first since moving to Hyundai Motor Group, the JoongAng Ilbo asked what he has researched, accomplished and is working toward.

Q. Air Lab is definitely the most well-known future-focused unit under Hyundai Motor Group, but what does it actually do?

A. We never really step up to promote ourselves, as we believe that the best way to advertise was by showing the released products. The job for this lab is divided into three main branches. One is to apply AI technology to the value chain of the overall car manufacturing business. This would entail improving the manufacturing process or making it more efficient, and some of our projects do just that. The second is creating “in-vehicle” services, which is about developing middleware platforms rather than the actual operating systems for cars. We call those platforms “Car Agents,” which can provide a diverse range of contents just like Amazon’s Alexa.

Is there anything that consumers can actually experience themselves?

That actually is the last branch of our work, which is mobility services. We use AI machine learning technology to develop a dynamic router platform, which allows the car to navigate the best routes in real time for drivers. When the age of autonomous driving comes, it will be important for Hyundai Motor Group and other automakers to figure out how something to ride can reach a destination in the least amount of time when many are doing the same for themselves. AI will, over time, learn how to find the optimal route for users.

Foreign automakers are operating mobility platforms themselves in their own countries, but Hyundai Motor Group is prevented from doing that due to regulations.

That may be true, but we think of this platform more as a business-to-business service. Hyundai Motor Group has been an automaker that makes profit from selling cars, but in the age of mobility, we should be selling services, which I think our executive vice chairman would agree with. Just as Amazon created Amazon Web Services, we can create our own platform for logistics companies, commerce businessmen and advertising agencies. User-based services, now mostly run by companies like Naver and Kakao, would then be a viable business option for Hyundai Motor Group as well.

Why a community-centered transport service?

Let’s say I’m going from here in Yangjae-dong to Gangnam Station [both in southern Seoul]. I would be puzzled and be frustrated whatever way I take. I could take a subway or get on a bus, but neither is convenient or quick. The service we are doing is finding the best route for users based on real-time demand and traffic conditions by locating them through virtual stations. People feel more discomfort when traveling a short distance than a long distance. Also because we are an automaker, we are capable of providing the best experience when inside the car as well.

Even just in Korea, the competition is extremely fierce from players like Kakao Mobility and Socar. I’m sure it’s more intense in the global market.

In the local sphere, Hyundai Motor and Kia Motors have strong competence. I’m sure we can gain an edge in the software platform sphere with data we gain from having high market share. We would launch the platform, hear our customers’ feedback and use that to make better cars. In one case, it might be possible for us to be like Apple and become a company that works on both hardware and software. In the mobility industry, most players are forced to choose between hardware and software, but we are capable of [doing both]. It’s a difficult road, but a path that we must take.

Can AI respond to sudden human errors like jaywalking or cars driving in the wrong direction?

It is impossible with rule-based, algorithm-coded AI systems. In the end, that could be possible for “general AIs” that learn over time like humans. “Domain transfer learning” is the key development trend in today’s AI technology, which would allow a system to apply its learning to solve different problems.

Transfer learning is how AI would learn from reading books, watching movies and browsing the internet that you get hurt from falling from somewhere high, rather than somebody inputting command to the system. When the AI reaches the level of intelligence of a normal person, I believe it would be capable of responding to such sudden human errors.

Commercialization of autonomous driving is getting delayed everyday. What should be done?