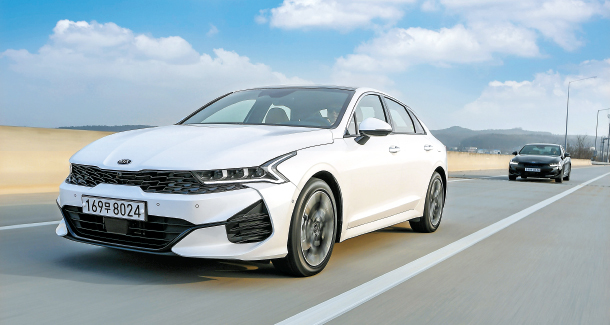 The third-generation K5 sedan, which is expected to compete against Hyundai Motor’s eighth-generation Sonata sedan in the local market, drives down the road in Gyeonggi on Thursday. [KIA MOTORS]

PAJU, Gyeonggi - Kia Motors has always stood in the shadow of its bigger sibling, Hyundai Motor.

Almost every car Kia Motors has launched in Korea has been just a little behind in sales compared to comparable models from Hyundai Motor, and even when it did launch something better, the same level of attention wasn’t guaranteed from the media. Almost without fail, Hyundai Motor comes out on top.

But 20 years after joining the Hyundai family, Kia Motors has grown, so much so that it can now explicitly challenge its brother Hyundai Motor for sales on the local front. On Friday, Kia Motors launched the third-generation K5 midsize sedan, hitting the market around nine months after Hyundai Motor’s eighth-generation Sonata.

Hyundai Motor rolled out the Sonata earlier this year with a strikingly different look from previous versions in a bid to break away from its taxi image. The new K5 does the same thing, but with a bit more bang for your buck.

Which one looks better is debatable. They have both adopted more modern and sporty looks compared to their predecessors, with the K5’s distinctive “tiger nose” giving it a wild and daring edge.

For this reporter, the K5 is more approachable to more people, as it hasn’t lost the traditional features seen in other sedans. The designers may have thought outside the box, but the box is still visible. Hyundai Motor, on the other hand, appears to have ripped the box to pieces with the new Sonata.

The K5 is equipped with leather-made ventilated seats and has a 12.3-inch cluster and 10.25-inch display infotainment system. Both the K5 and the Sonata have a futuristic and modern vibe inside, typical of most new vehicles on the market nowadays.

The real difference between the two becomes visible on the road. The Korea JoongAng Daily took the new K5 through its paces on Friday, driving an 81.5-kilometer (50.6-mile) route heading northwest to Paju, Gyeonggi.

This reporter has, over the past few months, driven a few Sonatas to try and understand why people were so excited about the Hyundai Motor sedan when it was released. But after driving the 1.6-liter turbo gasoline model of the new K5, any thoughts of the Sonata quickly disappeared.

Unlike the Sonata, which had to be pushed to get over 100 kilometers (62 miles) per hour, the K5 leapt at the opportunity to burn some rubber while speeding down the highway.

The highest performing trim of the midsize sedan, rated at 180 horsepower and 27.0 kilogram-meters (195.29 pound-feet) in torque, wasn’t slow in changing speed and was smoother when I slammed on the gas.

The best performing option offered with the eighth-generation Sonata is rated at 160 horsepower and 20.0 kilogram-meters of torque. The K5 already beats the Sonata by the numbers, and the personal driving experience tells me that the K5 contains a dynamic vibe and intensity for those behind the wheel.

What the K5 delivered over that 50 miles was a lot more than expected. Comfort was a given, but the image of a sedan suggested it was going to be a rather sedate, peaceful ride. It wasn’t. The inherent sportiness of the new K5 came as a surprise, and switching on sport mode just amplified the experience.

But that performance does come at a cost. Whenever the K5 exceeded 70 kilometers per hour, all talking in the car was forced to stop because the noise from the road and the engine made it impossible to continue a conversation. The Sonata may have been a bit more sluggish, but it was much more suitable for socializing.

As with all cars from Hyundai Motor Group including the Sonata, the K5 comes with the same reliable high-tech infotainment system. The new K5 also comes with the latest car-to-home technology and voice recognition command platform made by Kakao.

Although I couldn’t try out the car-to-home system because I don’t have any connectable smart appliances at home, the artificial intelligence-based voice command system was available and turned out to be a little disappointing.

The system could open and close the windows and turn on and off the air conditioner as commanded - but only at low speeds. When the car was moving faster, the system didn’t seem to understand what I said, as it kept shouting back at me, “That is something I cannot do.”

And yes, controlling the windows and temperature, along with a couple more features, are basically all that can be done with the voice command system at the moment, so think of it as more early days Siri than Iron Man’s Jarvis.

After around 20 years in the shadows, it seems that Kia Motors has what it takes to fight its larger sibling in sales and possibly take its place alongside Hyundai Motor in the eyes of local consumers.

By bringing the louder, sportier, approachable and perhaps a little smarter K5 midsize sedan to the market, Kia Motors may be able to make a dent in Hyundai Motor’s undefeated reputation.