Hungary-Korea relations have never been better

Hungary-Korea relations have never been better 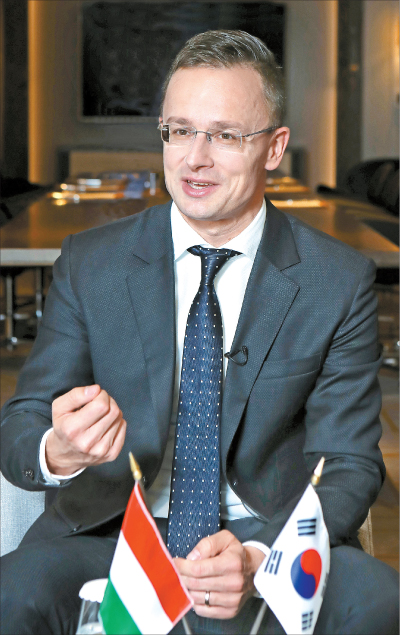 Hungarian Minister of Foreign Affairs and Trade Peter Szijjarto highlights the strengthening ties between Hungary and Korea in the economic and cultural sectors last Thursday during an interview with the Korea JoongAng Daily at the Lotte Hotel Seoul in central Seoul. [PARK SANG-MOON]

Three decades from now when Korea and Hungary celebrate their 60th anniversary of diplomatic relations, Hungary’s Minister of Foreign Affairs and Trade Peter Szijjarto hopes to say the exact same thing about bilateral ties as today: “It’s never been as good as now.”

That was certainly the case in the economic sector this year, when the two countries marked their 30th anniversary.

In 2019 alone, Korean companies invested a total of 2.7 billion euros ($3 billion) in Hungary, mostly in the battery manufacturing field as demand for electric cars surged worldwide.

Several companies including SK Innovation and Samsung SDI vigorously rolled out plans to newly build or expand their battery plants in the European nation, leading Korea to become the top foreign direct investor in Hungary this year - and according to Szijjarto, this marks the first time in the “last couple of decades” that Germany didn’t come first.

The Korea JoongAng Daily sat down with Szijjarto last Thursday during his visit to Seoul to talk about the strengthened economic ties, how both countries intend to expand that relationship to other sectors and the Danube River ferry tragedy, which left 27 dead and one still missing, most of whom were Korean tourists.

The following are condensed excerpts of the interview. 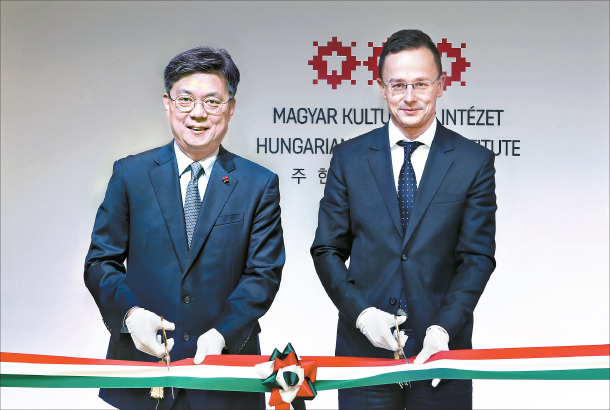 Q. I received a schedule of your planned activities in Seoul today, and it says you’re meeting with Korean corporate officials.

A. Today, I will meet the representatives of nine major Korean companies including Samsung SDI, Lotte and SK Innovation. They are all currently doing business in the Hungarian market, and this year, Korea was the No. 1 foreign direct investor to Hungary. It’s the first time in the last couple of decades that a country other than Germany was ranked first. Altogether, Korean companies invested 2.7 billion euros in Hungary this year, which is quite a big number. What’s equally important is that this investment represents very high technological standards, very high added value, and they contribute to the modernization of the Hungarian national economy. They contribute to the change of dimensions of our national economy as well, so Korean investment plays a very important role.

What are the strengths of the Hungarian market?

The most important argument of these companies to invest in Hungary is the fact that the lowest tax rates of the European Union are applied in Hungary. We have flat tax both in personal income and in corporate income, and we’re the only country in Europe to offer a single-digit corporate income tax rate, which is 9 percent. The personal income tax rate is 15 percent. So these are the lowest tax rates of Europe.

On the other hand, we have introduced a system called dual vocational training, which offers vocational training not only at the higher education level but at the secondary education level as well. So companies have the opportunity to design the curriculums for students from the age of 15, and these students are able to gain the necessary skill sets to be able to integrate into the labor market, into the supply side of the labor market, much quicker than before.

The Hungarian government also runs an economic policy based on low tax rates and continuously decreasing tax rates. Just recently in July, we reduced the social tax rate by another 2 percent, and we’re going to continue to cut the tax burden on labor, which allows us to offer beneficial circumstances for Korean companies.

We are two countries geographically far away from each other. That’s why we need to build a solid basis for good cooperation, and the best solid base can be built on people-to-people exchanges. Then the question is, how can you build people-to-people connections? The answer is through culture and education. There are about 750 Korean students studying in Hungarian universities, and among them, almost 500 study medicine. There are 100 Korean students who receive scholarships that are fully financed and covered by the Hungarian state. We are proud of the fact that our higher education system is so attractive to Korean students, who definitely have very high and sophisticated demands regarding the level of education. And so now, our goal is to make the Hungarian culture even more well known and recognized in Korea. I think culture can be a very good bridge between the two nations, between the two people, because Koreans have an extremely rich culture, and we Hungarians have a long history and rich culture as well.

How many Hungarian government-funded cultural institutes are there around the world?

The one in Seoul will be the 26th.

Why in Seoul now?

Actually, when I was here in 2014 as part of a delegation, we made a promise to your government that in the year of the 30th anniversary of the establishment of diplomatic ties, we will open our cultural institute here. But why now? Because the relationship has never been as good as now. And now, we really feel that we need to build other pillars of cooperation as well. Economic cooperation is super. The booming number of Korean companies in the Hungarian market is evidence. We have good political cooperation as well. We don’t have any open issues between each other, no conflicts, and we usually support the representatives of each other in the United Nations. We highly value your efforts on the Korean Peninsula. We are a country that had to suffer under a communist regime for 40 years, and we got rid of it 30 years ago, so we know how it feels to fight a communist regime, so we are absolutely in solidarity with you in this regard. So economically and politically, everything is fine. Now we have to build strong pillars of culture and education as well because this will help the first two pillars to further grow.

Speaking of people-to-people exchanges, let’s talk about the Danube River ferry accident on May 29, which left 25 Koreans killed and one still missing. They were mostly tourists who wanted to enjoy a ride on a ferry in Budapest. For potential Korean tourists who hope to ride a ferry on the Danube in the future, can they feel safe?

That was a tragedy, not only to the Korean people but to Hungarians as well. Really shocking. And I’ll tell you why. For the last 65 years, no such accident has happened on the Danube in Budapest. For 65 years. And we have to look back for a very, very long period of time, thank God, to find another accident that killed so many people. It was really a tragedy. But the fact that there was no such accident on the Danube for the past 65 years shows that the problem is not with the regulations or the rules. The problem was the captain, a Ukrainian person, who violated the rules and the regulations. There’s a very serious charge raised against him, and the court trial will start this week. And we hope that the conclusion will be tough for him because for killing so many people, there must be a very, very tough consequence.

But Korean tourists can definitely be sure they are safe when they come to Budapest. The accident in May was based on the very irresponsible behavior of one person who happened to be the captain of a ship, a Ukrainian person. But you can be sure that the Hungarian courts will do their best to make the necessary conclusion for the issue. We’re working with the Korean Embassy in Budapest on a memorial to be established close to the Danube River to remember the victims. There’s one victim still missing, and the searching is still continuing, and hopefully we will find the body.