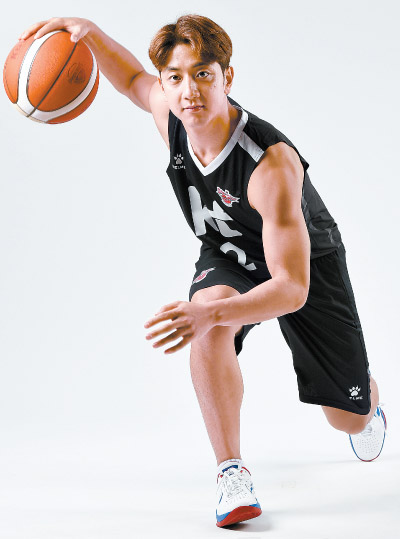 When guard Heo Hoon of the Busan KT Sonicboom first joined the Korean Basketball League (KBL) in the 2017-18 season, the club was playing so badly that his rookie season featured an 11-game losing streak. But this year couldn’t be more different, with Heo leading the club to a seven-game winning streak.

By defeating the Changwon LG Sakers 74-73 on Saturday, the Sonicboom extended their winning streak to seven, a first since October 2010. With such a winning streak, the Sonicboom is now ranked second in the KBL 2019-20 regular season standings with 13 wins and nine losses and a 0.591 winning percentage, as of Monday 5 p.m.

Heo, who is playing his third season in the KBL, is having quite the season this year. He leads the league in points among domestic players, at 16.5 points per game. Overall, he is ranked sixth in this category, but in assists, Heo leads the league at 7.36 per game.

Heo has also shown great accuracy in his 3-pointers. During the Sonicboom’s game against the Wonju DB Dongbu Promy on Nov. 20, Heo made nine 3-pointers, the most in a single game. He even beat his father Hur Jae’s record of seven straight 3-point shots. The clip of Heo’s 3-point shots last month garnered 170,000 views online.

Before this season, Heo was better known as Hur’s son, a legendary athlete in Korean basketball. However, with his performance this season, the fans are now calling him the “KBL’s new star.”

Heo is following in his father’s footsteps in terms of competitiveness on the court.

Back in the 1997-98 season championship series, Hur broke his finger, but played on despite this injury and a cut to close to his eye. Although his team ended up finishing runner-up after the seventh game in the series, Hur was still named the MVP. His left pinky, the one that he broke, is still bent.

“[I watched that clip] on Youtube,” Heo said. “My father seems to have a very competitive edge. When I told him that I had a stress fracture when I was little, he joked around by asking me why I was taking a break for that. But I think I got his competitive instinct. If I was in that same situation, I would have played too, because it’s the championship series.”

Heo’s mother backs his statement up adding that he’s been very insistent that injury doesn’t prevent him from playing on the court.

“When Hoon played in high school, he broke his nose during a practice game against a college team,” said Heo’s mother. “Rather than surgery, he took few days off and played in a practice game, but he broke it again.”

Heo’s been having a tough time keeping in touch with his dad lately. Since retiring, Hur has been experiencing some new-found fame and has been making regular appearances on TV.

“These days, dad’s so busy that I can’t even talk to him on the phone,” Heo said. “I think it’s better for him to be busy being on the entertainment programs than drinking.”

The last time Heo saw his father was on Nov. 21, when the Sonicboom hosted the Promy. At the time, Hur made an appearance on the court to take three shots, but missed them all. Heo again followed in his dad’s footsteps, but this time to the detriment of his team and only scored six points throughout the game.

Once the game ended, Hur said, “I’ll hide in the crowd to watch the game next time.” Heo retorted that he should “just watch it on TV.”

In September, Heo was added onto the Korean national basketball team and competed at the International Basketball Federation (FIBA) Basketball World Cup. Although Korea didn’t see the best result, competing against the world’s top teams allowed him to learn more about the sport.

“I’ve practiced my shots a lot, thinking about my father,” Heo said.

Last year, Hur was the Korean men’s national basketball team’s head coach for the 2018 Asian Games. At the time, Hur added both of his sons - Heo Hoon and Heo Ung - onto the roster, but the team failed to defend their title. Instead, they walked away with a bronze. Hur resigned afterwards.

Heo says it is because of the Asian Games that he is even more determined to play better to prove that his father wasn’t wrong.

So far, Heo is certainly exceeding expectations. Currently, Heo leads the KBL’s All-star fan vote which is set to end Dec. 25. The All-star game is expected to be held next month. Heo’s older brother, Heo Ung, won the fan votes back in 2016 and 2017 season.

“My brother made fun of me by saying that I’ll never win the fan vote,” Heo said. “I really want to win this time.”

Although there’s a long way to go until the end of the season, there has been a lot of talk about the possibility of father-son KBL MVPs. However, Heo said it’s too early to say.

“I have a long way to go until I catch up to my father,” Heo said. “But if I keep on trying, I believe that I’ll become a better player one day.”