Households of the future will be very single

Households of the future will be very single 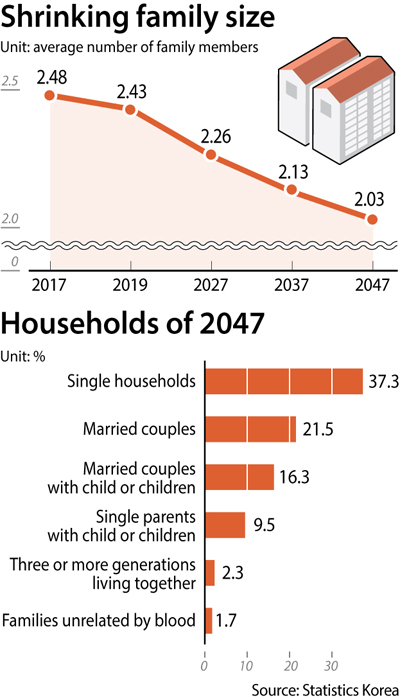 Single-member households are becoming a big part of Korea’s future, and President Moon Jae-in has called for society to get ready.

Statistics Korea on Friday released a report “Population Projections for Provinces” that included estimations of the households of the future: their size, type and structure. The report, which is drawn up every five years, was actually released three years ahead of schedule as projections have been drastically changed.

The number of single households is increasing at a formidable speed. Typically, single families signify an unmarried or divorced person or a widow or widower. In 2017, non-single families living together accounted for 69.9 percent of total households. They included households composed of couples with a child or children (31.4 percent), couples without children (15.8 percent) and single parents with a child or children (10.2 percent).

Single families only accounted for 28.5 percent.

“In 2047, single households will become the most dominant type of households in every city and province,” said Kim Jin, a director at Statistics Korea.

Women are increasingly becoming main providers for families. Households supported by a female provider, which stood at 30.4 percent at 2017, are expected to reach 39.2 percent of total households by 2047. In other words, four out of 10 households will have female providers.

“President Moon ordered his staff to ‘come up with comprehensive policies for single households,’ calling for changes in housing and social welfare policies currently focused on families of four in the face of rapid increase of single households,” said presidential spokeswoman Ko Min-jung last Friday.