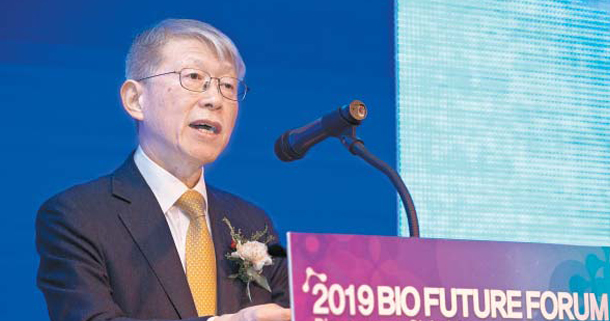 The Ministry of Science and ICT promised to increase investment to foster the research and development (R&D) capability of Korea’s bio industry, which it considers one of three key growth engines for the future.

Science Minister Choi Ki-young said Monday the government will raise the R&D budget for the local bio industry to more than 4 trillion won ($3.4 billion) by 2025 and continue developing industrial clusters throughout the country.

“While economic growth has been falling across the world in general, Korea has remained comparatively stable,” Choi said Monday in an opening speech for the two-day Bio Future Forum held at the InterContinental Seoul COEX hotel in Gangnam District, southern Seoul.

“In this time of opportunity, it is imperative to find new growth engines, and many have pointed to the prospect of the bio industry.”

The Bio Future Forum, hosted and organized by the Ministry of Science and ICT since 2015, is meant to encourage investment in promising local bio start-ups and share research progress into technologies under development.

The forum was born as the country looked to its biopharmaceutical companies to become a future growth engine.

According to Korea Industrial Marketing Research, Korea’s bio industry market grew an average of 7.25 percent annually from 8.9 trillion won in 2013 to 11.8 trillion won by 2017. The market tracker believes that the sector will grow to 14.7 trillion won by 2020.

“Korea’s competitiveness in the bio health sector has been growing at a steady pace, and now bio is one of the three major pillars for this country,” Choi said.

“We are growing support with a focus on R&D so that the local bio sector can become a major industry supporting the country later on,” he continued.

For next year, the Ministry of Science and ICT has been given a 16.2 trillion won budget, up 9.2 percent, or 1.37 trillion won, from this year’s budget.

The increase came as the central government increased its overall R&D budget by 17.3 percent to 24.9 trillion won.

Under the 16.2 trillion won budget, the ministry has earmarked an additional 400 billion won to support the growth of the semiconductor industry, bio health sector and future car industry, the three major future growth pillars identified by the government.

With the increased budget, starting next year the ministry is launching R&D projects into new medical appliances and treatments for dementia and other brain-related diseases.

While expanding its investment into building an artificial intelligence-based new drug development platform, the ministry is going to embark on a project that seeks to create a comprehensive big data platform on bio products and research progress for personalized health care.

“Even though some misfortunes have erupted in the local biopharmaceutical industry this year, government support has been increasing,” said Kim Jang-seong, head of the Korea Research Institute of Bioscience and Biotechnology.

“And we are now seeing some progress like SK Biopharmaceuticals becoming the first Korean company to earn U.S. Food and Drug Administration approval on its own.”

Kim added that government support must be continued, as the biopharmaceutical industry will be key to improving the lives of people in the coming age when average life expectancies rise and global populations fall.