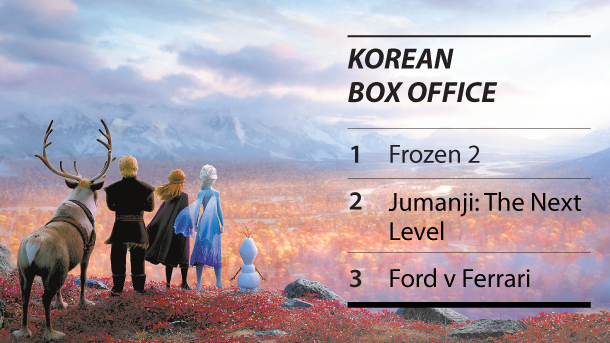 “Frozen 2” dominates over the weekend while the rest of the local box office charts were mostly occupied with foreign films. However, the highly-anticipated Korean disaster blockbuster “Ashfall” could knock the animated favorite from the top spot next weekend. [WALT DISNEY COMPANY KOREA]

“Frozen 2” has been dominating the local box office for a month now. Its ticket sales have long surpassed the record set by its first installment, already accumulating over 12 million admissions as of Sunday.

The Disney animated series stood firm at the top of the ranks, with over 895,000 audience members seeing the film at over 1,616 screens.

Hollywood blockbuster “Jumanji: The Next Level” landed in second place on its first week, selling 601,000 tickets at 1,189 screens. The blockbuster is the second in the Jumanji series and sees four previous cast members reprise their roles as the game’s avatars - Dwayne Johnson, Jack Black, Kevin Hart and Karen Gillan. In this series however, Johnson and Hart will portray different characters than the first movie.

The four friends - Bethany, Fridge, Martha and Spencer - thought they had seen the last of Jumanji when they destroyed the game to prevent anyone else from becoming trapped inside it. However, for some reason, Spencer decided to keep the broken pieces and succeeds in reassembling the game in his grandfather Eddie’s basement. Then, he’s accidentally sucked into it.

When the other three find Spencer gone and the game turned on, they decide to play the game to rescue him once more. In the process however, Spencer’s grandfather Eddie and his friend Milo go down to the basement to see what the commotion is about and are forced to play the game as well. Now the three friends must take care of the older duo while also trying to find and rescue Spencer in a more upgraded, deadly game.

Along with the predicted popularity of “Frozen 2,” the other top spots were also mostly occupied by foreign films this weekend. But local apocalypse blockbuster “Ashfall” is expected to debut amid high anticipation of local moviegoers, as it features some veteran cast members such as Ha Jung-woo, Lee Byung-hun, Jeon Hye-jin and Bae Suzy. The upcoming film’s plot is based on a world which sees the dormant volcano Mount Paektu erupt on the Korean Peninsula.

Could “Ashfall” be the movie that finally knocks the animated fan favorite “Frozen 2” off its four-week reign after next weekend?