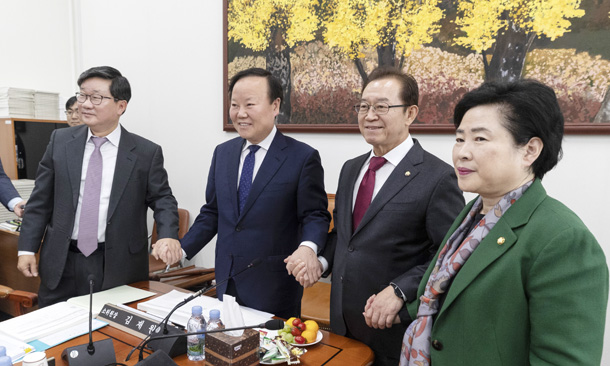 Rep. Kim Jae-won, chairman of the Special Committee on Budget and Accounts, second from left, holds hands with senior members of the committee representing other parties, including the ruling Democratic Party, on Dec. 13 before convening their meeting at the National Assembly. [LIM HYUN-DONG]

HA HYUN-OCK
The author is the head of welfare and administration team of the JoongAng Ilbo.

Gold owned by the Bank of Korea is stored in the Bank of England, as keeping it in the financial center of London is convenient for trade and management. There is also the cost issue of safety and transport. It is practically impossible to move gold whenever the government sells or buys it. This practice of storing money or goods is called earmarking. It originates from the attaching of tags to the ears of livestock such as sheep to indicate the owner.

Another meaning of earmarking is for lawmakers to secure the budget to please the constituency. It means allocating government budget on a certain project in the district. Since there are many pork barrels or wasteful budgets, earmarking is considered an outdated practice in Washington D.C. It is the American version of the so-called scrap paper budget in Korea.

When the revision of next year’s budget plan was passed on Dec. 10, there were many scrap paper budgets. While the process of adding and subtracting when they reviewed the super budget of 512 trillion won ($436.6 billion) was not revealed, lawmakers did not lose the way to care for their districts. Many issued press releases of self-praise.

Democratic Peace Party’s Chung Dong-Young and Bareunmirae Party’s Kim Gwan-young — who are major figures in the 4+1 consultative body of the Democratic Party and minor opposition parties in passing the huge budget — increased their district budgets from the government plan by 3 billion won and 2.5 billion won, respectively. Rep. Kim Jae-won — chairman of the policy committee of the major opposition Liberty Korea Party which opposed the revised budget plan — pocketed 10 billion won more for his own district than the government’s original plan.

The budget is like a short blanket. Many places need it, but it can’t always reach. Moreover, the storage is not abundant next year. The rate of tax revenue increase has turned minus. The sovereign debt is to increase by 64.4 trillion won from this year, and the size of national bond issuance is expected to reach 60 trillion won next year, the largest in history. Even when tax and debt burdens on the citizens grow, the budget blanket for the assemblymen is overly thick and cozy.