Pengsoo the penguin gets a flat from Posco

Pengsoo the penguin gets a flat from Posco 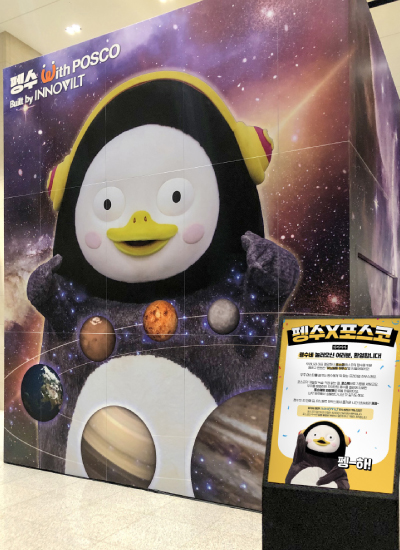 Pengsoo, the straight-talking penguin character taking the nation by storm, has a new home.

On Monday, Posco said it built a house made of steel for the 7-foot bird EBS is featuring in a new children’s program.

The steelmaker completed the construction of the home on Dec. 6, a month since it initiated the project. It is located in the lobby of EBS headquarters in Ilsan, Gyeonggi.

Posco said the space is large enough for the gigantic Pengsoo, as the steel is shaped to accommodate the hulking character. The interior is decorated with various items, like a clock, cushions inspired by the character and posters featuring the bird.

The steelmaker used PosART, its printing technology, on the exterior to give the structure the right look.

The interior of Pengsoo’s home was revealed last week on the company’s YouTube channel.

Pengsoo made a debut in April on the “Tok! Tok! Boni, Hani” children’s program. The character simultaneously started a YouTube channel titled, “Giant PengTV.” Known for having an outspoken personality, the giant penguin has become a hit among young adults.