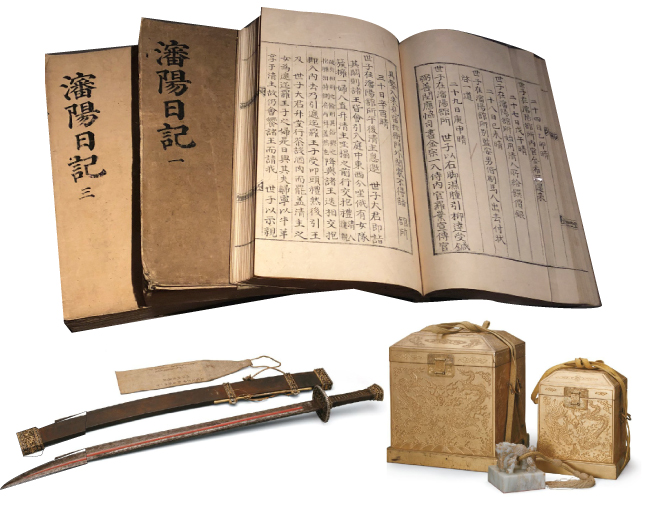 When the Manchus invaded Korea in 1636 and King Injo surrendered, his sons Crown Prince Sohyeon (1612-1645) and Prince Hyojong (1619-1659) were among those taken as captives to Shenyang, the capital city of the Manchus at the time.

Their eight-year stay in Shenyang is recorded in detail in “Shenyang Diary,” written by a Korean official who was in charge of Sohyeon’s studies.

“A Qing official called on the princes today,” begins an entry for June 30, 1638. “They then called over members of the imperial family and opened a festival. It seemed as if they wanted to convey a friendly gesture by inviting the princes to the occasion.”

The diary records the princes’ stay at the palace from 1636 to 1644. The princes moved to Beijing in 1644, as the Qing dynasty moved its capital there. The princes were released in 1645.

Snippets of the cultures of the Later Jin and Qing dynasties experienced by the two princes have been brought to Seoul in a special exhibition, “Treasures from the Shenyang Palace Museum,” open at the National Palace Museum of Korea until March 1, 2020.

The exhibition introduces the imperial culture of the Later Jin and Qing dynasties through artifacts from the Shenyang Palace, the center of the two dynasties’ rule until 1644, when the capital was moved to Beijing.

Shenyang Palace is one of the two most well preserved palaces in China - the other being the imperial palace in Beijing - and was included on the Unesco World Heritage list in 2004.

Artifacts and national treasures from the period have been provided by the Shenyang Palace Museum in Liaoning Province of China.

“As neighboring countries, China and Korea have many shared aspects in their cultures,” said Li Shengneng, director of the Shenyang Palace Museum, who visited the National Palace Museum in central Seoul last week for the opening of the exhibition. “As the first exchange exhibition between the two museums, this exhibition presents 123 objects, some of which include national treasures.”

Top: Shoes worn by empresses in the Later Jin and Qing dynasties of China, with 5.5-inch platforms. Above: A ewer from the Shenyang Palace has a design commonly used in Tibetan and Mongolian regions. The design at the top of the ewer is similar to a hat worn by Tibetan monks. [ESTHER CHUNG, NATIONAL PALACE MUSEUM OF KOREA]

Shenyang Palace’s foundational structures were built in 1625 when Nurhaci, the founding leader of the Later Jin Dynasty (1616-1636) of the Manchus, designated Shenyang the capital city of his rule and built the palace.

During the Manchu conquest of China and decades-long transition from the Ming to Qing Dynasty (1644-1911), the palace continued to be the center of rule until 1644 when Nurhaci’s grandson, Shunzhi, moved the capital city to Beijing.

Even after the move, the palace was used as a temporary abode or a summer palace for the emperors and queens, resulting in a collection of objects used by the imperial family for generations, including national treasures, 13 of which have been brought to Korea for the exhibition.

One of the first objects that a visitor sees when entering the exhibition is a cloud-shaped plate that was used by the soldiers run under the Eight Banners military system - a Nurhaci invention to organize the diverse Manchu tribes into eight different groups. The plate was used by soldiers at the watchtower to signal an incoming attack and it is said that the number of times the plate was hit signaled the size of the enemy’s army, according to the Shenyang Palace Museum.

The steel plate is designated a national treasure of China dating back to 1623.

Swords of Nurhaci and Hong Taiji, also national treasures of China, are featured in the exhibition. The Sword of Nurhaci was presented to him in 1595 when the Ming Dynasty (1368-1644) knighted him a “Dragon and Tiger [Longhu] General.”

Next to the swords are the imperial seal of Nurhaci and its inner and outer boxes. The seals of emperors of China describe the accomplishments of their reigns. The handle of the seal is in the shape of a dragon. The boxes are covered in gold with designs of dragons and phoenixes.

Many of the artifacts are evidence of the mounted archery culture of the Manchus. Bows used by Hong Taiji and his son Shunzhi during their reigns are included in the exhibition, as well as armor, helmets, quivers and saddles used by Qing emperors following their reign.

An example of a yellow imperial robe, worn by emperors during coronation ceremonies, weddings or religious rites, can be found nearer the end of the exhibition. A national treasure of China, the robe contains 12 symbolic designs - including mountains, fire, dragons and more - that are commonly found on imperial robes from this period in China.

Glimpse into a queen’s life

Empresses wore long jade necklaces, phoenix-shaped pearl hairpins and 5.5-inch platform shoes in the Shenyang palace, according to the exhibition.

“This is a jade necklace that you often see worn by empresses in their portraits,” said Paik Eun-gyeong, curator of the exhibition. “Any necklace made with jade could be worn only by the emperor and empress.”

Elaborate attire vary in colors and designs, but you can tell the ones worn by empresses by the dragon motifs.

“The general color of dresses for imperial women of this time period is yellow, but dragons were only used on attire specifically for the empress,” said the Shenyang Palace Museum in its statement.

“Xiaozhuangwen is understood to be one of the key figures who helped stabilize the ruling of the Qing Dynasty by providing crucial assistance to emperors Hong Taiji, Shunzhi and Kangxi,” Paik said, pointing to her portrait.

Manchus and the world

The European presence and influences on the Qing dynasty could also be found in some artifacts from the palace.

Sohyeon and his younger brother Hyojong were released and returned home in 1645. But neither lived a long life.

Sohyeon, who was to succeed the throne of King Injo, died suddenly that year. Hyojong became the 17th king of the Joseon Dynasty (1392-1910) and carried out multiple military expeditions northward into China but died in 1659.

What the Qing and Joseon may not have imagined centuries ago was that their descendants would be studying each other’s artifacts.

“We will be sending an exhibition of a collection of objects and national treasures of the Joseon dynasty to the Shenyang Palace Museum next September,” said Ji Byong-mok, director of the National Palace Museum of Korea. “It will mark the first time that our museum is doing a solo exhibition on Joseon imperial culture abroad.”