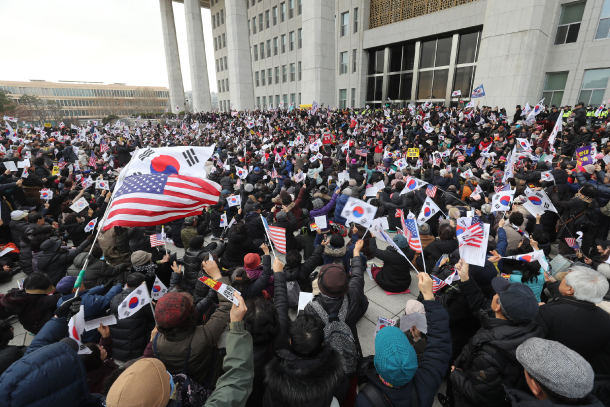 The main opposition Liberty Korea Party and its conservative supporters protest in front of the National Assembly on Monday to criticize the ruling Democratic Party and its legislative allies for attempting to pass several contentious bills aimed at introducing a new election system and weakening the prosecution’s powers. [YONHAP]

Following a violent protest by the main opposition party and its supporters on the premises of the legislature, National Assembly Speaker Moon Hee-sang scrapped a vote Monday on fast-tracked bills.

“I will not open a plenary session today because it won’t be possible to smoothly operate a session,” Moon said in a statement. “The ruling and opposition parties must reach an agreement on contentious bills, designated as fast-tracked items, as soon as possible.”

The Liberty Korea Party (LKP) started a rally in front of the National Assembly’s main building around 11 a.m. to criticize the ruling Democratic Party (DP) and its legislative allies for attempting to railroad through bills revising the electoral system and weakening the prosecution’s powers.

The National Assembly turned into mayhem after a violent scuffle took place between protesters and police at a rally hosted by the LKP. The party’s Chairman Hwang Kyo-ahn, floor leader Rep. Shim Jae-cheol, chief policymaker Rep. Kim Jae-won and other lawmakers attended the rally. Thousands of LKP members and supporters also participated.

Thousands of LKP supporters rushed in along with members of conservative groups and ultra-conservatives who support impeached President Park Geun-hye known as the “Taegeukgi Troops,” for the Taegeukgi, or the Korean national flag, they always wave.

“Your rage will impact the National Assembly,” Hwang told the protesters in encouragement. “You’ve already won a victory.”

The protesters waved Korean and American flags and shouted slogans such as “Let’s kill Speaker Moon Hee-sang” and “Let’s destroy the National Assembly.” Although the LKP repeatedly told the participants they must not enter the Assembly building, some rushed the doors. As the police tried to block them, violent scuffles took place. The main entrance doors were partially broken in the scuffles.

The protesters remained on the steps and continued loud demonstrations for hours. Some of them smoked on the lawn, where smoking is prohibited, and shouted insults at National Assembly staffers who tried to stop them.

Although the LKP tried ending the rally, the protesters refused to leave. The police said about 6,000 people participated, while the LKP estimated 10,000. As of 5 p.m., the standoff between the police and protesters continued.

After announcing there would be no voting session Monday, Moon condemned the LKP and its supporters.

“Today, supporters of a certain group almost violated the National Assembly,” he said in the statement. “Something that must never happen happen. Both ruling and opposition party politicians must realize the seriousness of the situation.”

“I am ashamed about the extreme political confrontation, where politicians only treat other parties as enemies and oppose everything, instead of having talks and trying to find a compromise,” Moon said. “As the speaker, I also feel heartfelt responsibility.”

Moon urged the ruling party and all opposition parties including the LKP to sit down and negotiate with common sense and reason.

The Assembly was expected on Monday to pass a series of bills connected to the government’s spending next year and other uncontentious bills. The DP also wanted to vote on some politically volatile bills, including an election law revision.

Moon originally announced a plan to hold a voting session on Friday but postponed it to Monday to give ruling and opposition lawmakers time for final negotiations.

Early Monday morning, Moon invited floor leaders of the DP, LKP and Bareunmirae Party to a meeting at 11 a.m., but the LKP’s Shim was a no-show. Shim said he had no intention of participating because of Moon’s unfair way of running the legislature.

“We plan to submit a motion to urge Moon to step down as speaker,” Shim said during a party leadership meeting in the morning. “He has been extremely unfair in operating the National Assembly, including the recent plenary session in which the budget bill was rammed through.”

Calling Moon a puppet of the ruling party, Shim said he had no intention of participating in a negotiation arranged by Moon. Shim also said the LKP would urge a criminal investigation into Moon for abuse of power and obstruction of business if he stopped the LKP’s plan to filibuster a bill recently submitted by the DP to open an extraordinary session.