U.S. has no deadline, says Biegun

U.S. has no deadline, says Biegun 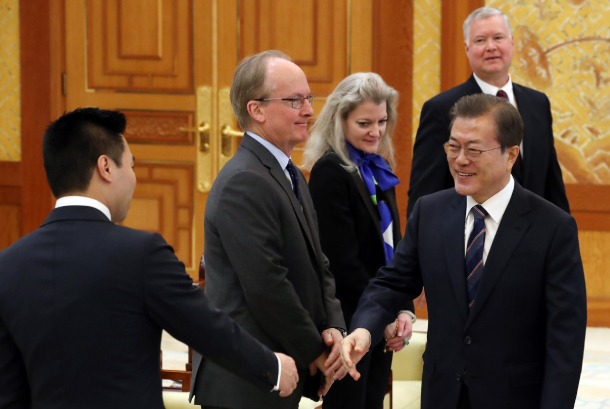 President Moon Jae-in, right, greets the retinue of Stephen Biegun, behind Moon, the U.S. special representative for North Korea, at the Blue House in Seoul on Monday. [YONHAP]

Top U.S. nuclear envoy Stephen Biegun said the United States has no deadline for denuclearization negotiations with North Korea Monday and urged Pyongyang to reach out to him and get things “done.”

“Much has been said about North Korea’s end-of-the-year deadline,” said Biegun, the U.S. special representative for North Korea, in a press briefing at the Ministry of Foreign Affairs in central Seoul. “On this point, let me be absolutely clear: The United States does not have a deadline.”

He continued, “We have a goal to fulfill the commitments the two leaders made during their historic summit meeting in Singapore,” referring to the joint statement signed by North Korean leader Kim Jong-un and U.S. President Donald Trump on June 12, 2018, pledging to complete denuclearization in exchange for security assurances for Pyongyang.

Biegun also had a direct message to Pyongyang: “Let me speak directly to our counterparts in North Korea. It is time for us to do our jobs. Let’s get this done. We are here, and you know how to reach us.”

There was speculation that Biegun may meet North Korean officials at the truce village of Panmunjom on the inter-Korean border during his trip to Seoul ahead of Pyongyang’s self-imposed end-of-the-year deadline for Washington to come up with a new approach. North Korea has threatened to take a “new path” if the United States does not and has engaged in increased missile provocations in recent weeks including two “important” tests at its Sohae Satellite Launching Site in Tongchang-ri earlier this month.

Biegun, who has also been nominated as U.S. deputy secretary of state, acknowledged current difficulties and said, “It has been a long year, and we have not made nearly as much progress as we would’ve hoped, but we will not give up.”

He stressed that it is “regrettable” that North Korea’s recent statements toward the United States, South Korea, Japan and Europe “have been so hostile and negative and so unnecessary.”

North Koreans, he said, “know full well that their remarks reflect neither the spirit nor content of the discussions we have had with them in Pyongyang, New York City, Washington, D.C., Singapore, Stockholm, Hanoi, Panmunjom and elsewhere.”

Since the collapse of the second North Korea-U.S. summit in Hanoi, Vietnam, on Feb. 28, where the two sides failed to agree on the scope of denuclearization needed for some sanctions relief, negotiations have been at a standstill. Despite a brief impromptu reunion of Kim and Trump in the demilitarized zone on June 30, working-level talks in early October between Biegun and North Korean diplomat Kim Myong-gil in Sweden ended without progress.

Biegun said, “As I briefed the United Nations Security Council members last week, we have offered any number of creative ways to proceed with feasible steps and flexibility in our negotiations to reach balanced agreements that meet the objectives of both sides.”

Last Wednesday, Biegun visited New York to meet with members of the UN Security Council, who had convened a session to discuss North Korean nonproliferation.

Biegun said that he is “fully aware of the strong potential for North Korea to conduct a major provocation in the days ahead” but warned that “such an action will be most unhelpful in achieving a lasting peace on the Korean Peninsula.”

He continued, “It is not yet too late. We and the North Koreans have within our hands the ability to choose the better path.”

Trump “has stated repeatedly that he remains confident that Chairman Kim is likewise committed to this same goal as us,” said Biegun.

He continued, “I believe we can do this, but the United States cannot do it alone.”

Lee said during the briefing, “South Korea and the United States, as we have until now, will cooperate closely in our efforts toward the joint goal of safe denuclearization and establishment of permanent peace.”

Cho likewise during talks recognized Biegun’s “unparalleled efforts” toward the complete denuclearization and permanent peace on the Korean Peninsula since he took the special envoy post in August 2018, the Foreign Ministry said in a statement.

The two sides further exchanged views on Seoul-Tokyo relations and agreed to continue to communicate constantly at various opportunities, the ministry added.

President Moon from 11 a.m. held 35-minute talks with Biegun for the first time in over 15 months at the Blue House. They last met on Sept. 11, 2018, just before Moon’s third summit with Kim Jong-un in Pyongyang.

The Blue House spokesperson said in a statement that Moon noted Biegun’s efforts toward denuclearization and the establishment of permanent peace and requested the envoy continue such efforts toward advancing the Korean Peninsula peace process.

Biegun in return said that there has been “no change” in his thoughts on achieving the historic task of denuclearization of the Korean Peninsula and establishment of peace through dialogue and negotiations, pledging his utmost effort toward this end.