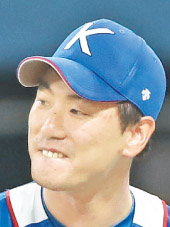 The Cardinals join a handful of MLB teams that have reportedly shown interest in the pitcher, including the San Diego Padres, Chicago Cubs and New York Mets.

The sources added that Kim arrived in St. Louis on Monday to undergo a physical before contract talks could begin in earnest.

All teams are free to speak with Kim. But if no deal is reached, he won’t be eligible to be posted again until Nov. 1, 2020.

After two years removed due to Tommy John surgery to repair a torn elbow ligament, Kim threw 190 and one-third innings, the second-highest total of his 13-year career.

Kim was voted the 2008 regular season MVP after going 16-4 with a 2.39 ERA and 150 strikeouts. He ranked first in wins and strikeouts, and finished second in ERA, falling one category shy of a pitching Triple Crown.

Kim was posted for the first time after the 2014 season under a different system. A silent auction was in place at the time, with clubs submitting a sealed, uncapped bid to win the exclusive negotiating rights to the posted player. The San Diego Padres won that auction with a $2 million bid, but the two sides couldn’t come to an agreement within their 30-day window.

If Kim signs a deal this time, the Wyverns will receive a “release fee,” or a transfer fee, depending on the size of the contract.

If the guaranteed value of the deal is $25 million or less, then the release fee will be 20 percent of the contract.

The Cardinals won the National League (NL) Central title with a 91-71 record in 2019 and had the second-lowest team ERA in the NL with 3.80. They were second in fewest home runs allowed with 191 and one third in walks and hits per innings pitched with 1.27.

Dakota Hudson led the staff with 16 wins, and a second-half surge by Jack Flaherty - he was 7-2 with a 0.91 ERA in 15 starts after the All-Star Game - also fueled the Cardinals’ run to their first Central title since 2015. Four starters, Hudson, Flaherty, Miles Mikolas and Adam Wainwright, made at least 30 starts in 2019. A fifth, Michael Wacha, made 24 starts in his seventh season with the Cardinals while battling injuries, and the All-Star right-hander signed with the New York Mets as a free agent last week.

Some major league scouts have told Yonhap News Agency they believe Kim could be a middle-of-the-rotation starter. In 2019, Kim averaged 147.1 kilometers per hour, or 91.4 miles per hour, with his fastball, putting him in first place among all Korean pitchers and fifth overall in the KBO. Kim also throws a slider described by scouts as “filthy.”

Should Kim sign with the Cardinals, he’ll be the second Korean to pitch in St. Louis, after reliever Oh Seung-hwan from 2016 to 2017.

Oh went 7-9 with 39 saves and a 2.85 ERA in 138 games for the Cardinals. He signed a one-year deal plus a club option for a second season, worth up to $11 million including incentives.