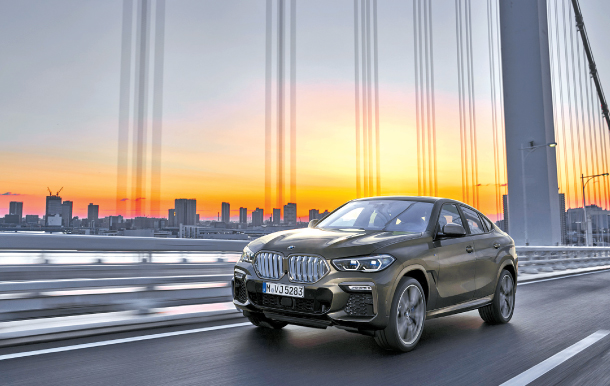 The Korean unit of the German automaker said Monday that the third-generation X6 is bigger and comes with a range of high-tech convenience and safety features.

The X6, the first-ever coupe-style SUV in the world, has been a highly successful model for BMW Group. Its first- and second-generation models launched in 2008 and 2014, respectively, have sold more than 450,000 units globally.

The iconic kidney grilles can now be illuminated by LED lights. BMW is offering the X6 in six models, three as limited editions. The three limited edition models are priced between 112.5 million won ($96,000) and 151.6 million won depending on options.

The M50d model (152 million won), which comes with electronically controlled sports-style differential gear, offers 400 horsepower and 77.5 kilogram-meters of torque. The M50d can reach 100 kilometers per hour (62 miles) in 5.2 seconds and can go as fast as 250 kilometers per hour.

The third-generation X6s are equipped with an active cruise control system and collision avoidance systems for the front, rear and blind spots, on top of a semi-autonomous driving system.

All models come with a 12.3-inch display infotainment system and a voice command system that allows drivers to set routes, change vehicle settings and maneuver displays.