He lived a quiet life and taught humility

He lived a quiet life and taught humility 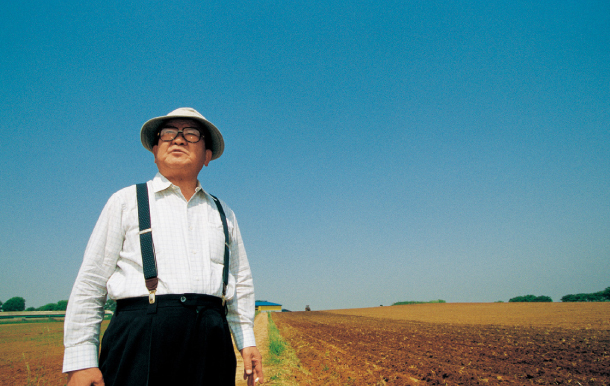 The late LG Group Chairman Koo Cha-kyung wears his trademark suspenders, with pants that always had dirt on them. After retirement, Koo enjoyed his life at a farm at Cheonan Yonam College in South Chungcheong. [YONHAP]

The site of the funeral was kept secret. The burial site was not disclosed. A modest ceremony was held. Those were the wishes of LG Group Chairman Koo Cha-kyung, who died at the age of 94 on Saturday.

In 1988, after 10 years as the chairman of the Federation of Korean Industries (FKI), the late Hyundai Group founder passed the torch to the late LG chairman Koo Cha-kyung, who was then-chairman of Lucky Goldstar Group.

At the time, heated debate was ongoing over the next chairman of the FKI after Chairman Chung served five consecutive times, but Chung already had plans. In February 1985, at the start of his fourth term, Chung already had Koo in mind.

Born in 1925, the late chairman Koo was a decade younger than late Chairman Chung, but the friendship between the two business leaders was unique. Outgoing Chung and practical Koo had different personalities, but they had a few things in common - down-to-earth honesty and a warmheartedness.

Late Chairman Koo lived by a code, which was “a businessman stands up straight.” Black horn-rimmed glasses and a thick Gyeongsang accent reflected his folksy nature. On the wall of his office in Yeouido, western Seoul, hangs a slogan in Chinese characters that means “a man should watch his actions even when he is alone.” This became the foundation of LG’s key principle, which is “right path management.”

After the June 29 Declaration in 1987, which was a monumental moment of Korea’s democratic development, the nation was in chaos with the ruling party losing the majority in the National Assembly while people were in the streets.

With the attitude toward large companies hostile, Koo stood by his conviction that the market economy must remain intact regardless of political democratization.

“Political contributions will be made only to political parties that safeguard the system of free economy,” said the late chairman.

His folksy character comes through in his memoir. In “There Is No Other Way,” Koo said his clothes were handed down from his uncle Koo Tai-hwoi.

He said his grandfather would make him use a school utensil until it was worn out. “He taught me the spirit of frugality,” said Koo in his memoir.

Prime Minister Lee Nak-yon was one of the many to pay tribute.

“I watched the late chairman Koo eating bibimbap alone at a shabby restaurant near the government complex in the 1980s several times,” said the prime minster.

The late chairman was humble to his customers and the public. Even when the business was going well, he never tried to teach the public. In his memoir, he said: “Ideas for new products all come from customers. Customers are our teachers.” According to an LG official, this is why the fourth-generation leader of LG Group mentioned the word “customer” about 30 times in his New Year’s speech, to carry on the late chairman’s spirit.

LG’s sales, which stood at 26 billion won ($22.3 million) by the time the late chairman took the helm of the group in 1970, grew 1,150 times to 30 trillion won when Koo stepped down in 1995. Establishing Korea’s first corporate research facility, Koo launched around 70 research facilities during his term.

After changing the company name to LG from Lucky Goldstar, the late chairman stepped down in February the following year, handing it off to the eldest son Koo Bon-moo. LG’s handover is still remembered as the first case of a smooth change of control at a large company.